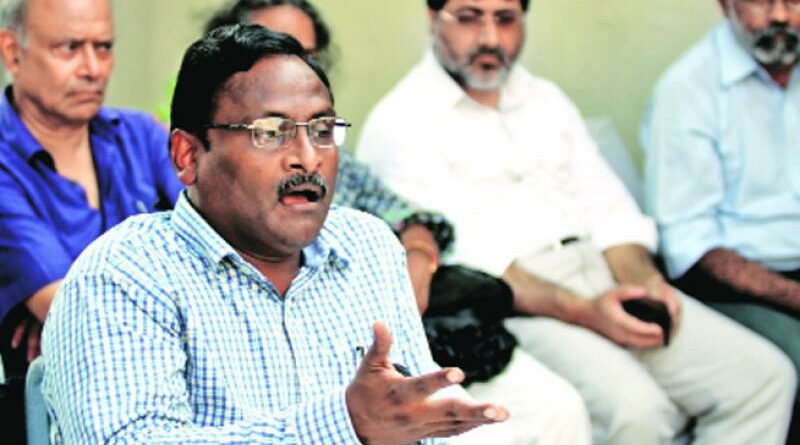 Saibaba, who is wheelchair-bound with over 90 per cent physical disability, had tested positive for COVID-19 on February 12.

Addressing a press conference, the Committee for Defence and Release of G N Saibaba said his condition has deteriorated since then with his blood pressure dropping to “dangerous levels” over the last two weeks.

“Our demands are that G N Saibaba should be released from Nagpur Central Jail immediately and that he should be administered treatment appropriate to all his medical problems with urgency,” committee member and DU professor Nandita Narayan said.

The committee, which also comprises lawyer Prashant Bhushan, writer Arundhati Roy, CPI general secretary D Raja, also noted that Saibaba has been suffering from cold, fever, throat infection, body ache, joint pain, shortness of breath, headaches and muscle spasms, but has been “left to recover with only simple antibiotics, instead of a thorough medical check-up”.

Roy said what the country is currently witnessing is “not politics, but pathology”, and that every individual speaking against the government risks incarceration.

“There”s something psychotic going on. Today, we are in the business of cultivating a mythological character called Narendra Modi who is trying to become a godman, who is trying to disappear all traces of his real life, of his college degrees.

“This nation is being hypnotised in some way. We can”t let it happen. We have to understand that all the best activists, the best lawyers are in jail. Whoever speaks for Saibaba and everyone else is next in line. We are up against an existential battle, a pathological battle,” she said.

CPI general secretary D Raja said his party had been demanding Saibaba”s release since the first tenure of the NDA government when Rajnath Singh was the home minister, but the requests have failed to yield favourable results on account of the “grave charges” against the professor.

The CPI leader said Saibaba’s treatment by the government was in violation of his right to adequate medical care, particularly as a disabled person.

“I have come to the conclusion that political parties who believe in democracy, who believe in the Constitution, and social movements must come together, and there should be a countrywide popular movement for the release of professor Saibaba,” he said.

Lawyer Prashant Bhushan claimed that one of the major reasons why Saibaba was incarcerated was because he was “relentlessly raising questions about the actions and policies of the government”.

“This has been one of the USPs of this regime that it has relentlessly gone after human rights activists, particularly the people who question the politics of this government. They have gone after dissenting journalists who have written against the government and the method of doing that is to arrest them by making up any kind of charges,” he said.

Bhushan termed the Unlawful Activities Prevention Act (UAPA), the stringent law under which Saibaba has been booked, “totally draconian”.

“In my view, the provision for bail in that law is totally unconstitutional, as is the definition of unlawful activity which is partly borrowed from the law of sedition,” he said.

Bhushan alleged that people in the country are being “falsely” implicated because the police officers who are doing that “at the behest of the political government are not being held accountable”.

“What we have been demanding is that implement laws that are there in the country, implement the convention we are signatories to. We are not demanding anything beyond that,” he said.

In March 2017, a Gadchiroli sessions court sentenced Saibaba and four others, including a journalist and a JNU student, to life imprisonment for alleged links to the CPI (Maoist) and indulging in activities amounting to waging war against the country under provisions of the UAPA.