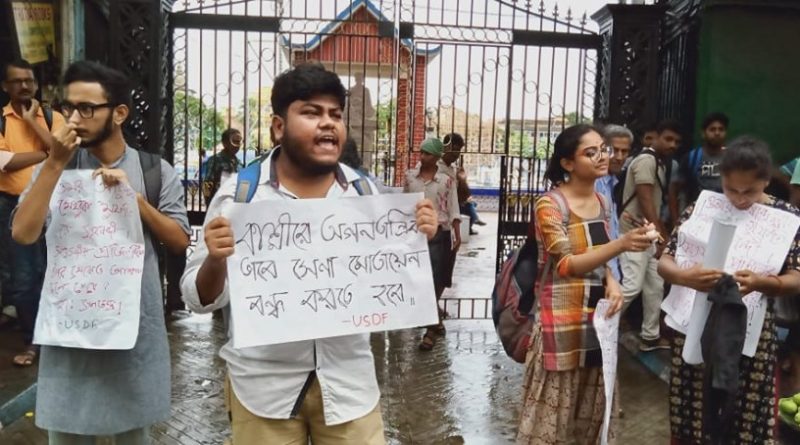 Democracy has turned into celebrating oppression and occupation. Listening to discussions in the streets and watching on television celebrations across India, one cannot help but wonder how consent can be manufactured.

When they hanged Afzal Guru, they said it was the collective conscience of the society that needs to be satisfied. A similar collective conscience is being sought to be manufactured today behind the scrapping of Articles 370 and 35A of the Indian Constitution, bifurcation and abolition of statehood and other repressive measures in Kashmir.

When the princely state of Kashmir acceded to be a part of India, Article 370 was introduced as a constitutional bridge between Kashmir and the Indian Union.

But, Kashmir is not the only example of a region enjoying special rights. Nagaland and Mizoram in the North-East enjoy special rights under Articles 371A and 371B respectively. Restrictions on owning property by outsiders exist in other places as well, such as in Sikkim.

Kashmir is the most heavily militarized zone in the world. More than 750,000 Indian military personnel are deployed in the state; for every twelve Kashmiris, there is an Indian soldier.

So, with the unconstitutional abrogation of Article 370, India obliterated whatever breathing space that was there in the occupied land.

The Indian State is trying to put an end to the struggle for Right to Self Determination that has survived in the will of the Kashmiri people.

Enforced disappearances, tortures and extra judicial killings have been a regular affair with nearly 10,000 cases of disappearances pending so far.

In the quest for freedom, Kashmir has witnessed forced disappearances, mass rapes, fake encounters and genocidal massacres. In 2012, more than 2000 mass graves were discovered and till date no justice has been served.

With the repealing of Article 35A, what is evident is that the Indian State wants to alter the demography of the valley by relocating people from the mainland and thereby ethnically and culturally throttling the Kashmiri identity. This has been a typical diabolical technique used by the Israelis to alter the territorial demography of Palestine. The same model has been used by China in the Xinjiang province to choke the Uighur Muslim minority.

The Indian State also wants to allow a free hand to the land mafias and corporate goons to economically exploit the vast resources of Kashmir denying the indigenous people from their sole share on it. Recently, the Chhotanagpur Tenancy Act, 1908 was scraped in order to facilitate corporate loot in Jharkhand.

The Indian State has been treating Kashmir as its colony and so it does not feel accountable towards its people.

With the dilution of the RTI act and diabolical amendment of the UAPA, it’s clear that the state will not tolerate any form of dissent and brand its dissenters as terrorists, behaving like an expansionist state.

USDF condemns the unlawful scrapping of the constitutional provisions which granted special status to Kashmir and demands their immediate reinstatement. USDF stands beside the people of Kashmir and all other ethnic minorities in their struggle against state repression and their fight for the Right to Self Determination.