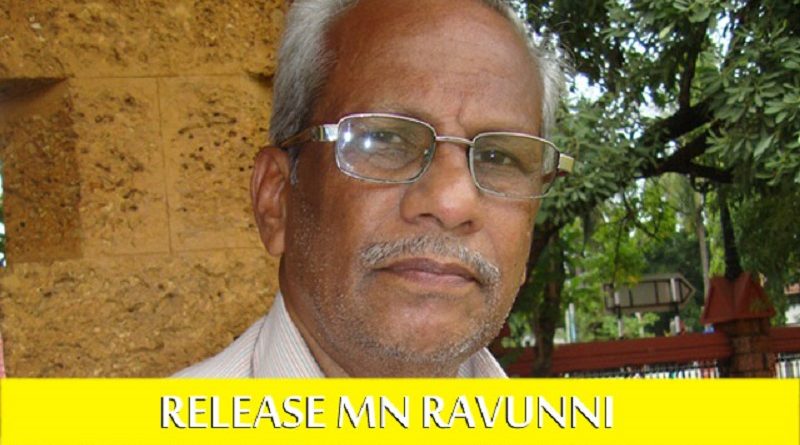 CONSTITUTE AN INDEPENDENT JUDICIAL ENQUIRY—FREE FROM THE INFLUENCES OF THE KERALA GOVERNMENT—INTO THE ALLEGED FAKE ENCOUNTER KILLINGS OF MS. AJITHA AND MR. KUPPU DEVRAJ, FUNCTIONARIES OF THE CPI (MAOIST)!

REDO THE POST MORTEM OF THE DECEASED UNDER THE GUIDELINES SET BY THE SUPREME COURT!

BOOK THE POLICE OFFICERS INVOLVED IN THE KILLINGS OF AJITHA AND K. DEVRAJ UNDER SEC. 302!

WITHDRAW ALL POLICE AND PARAMILITARY FROM AREAS WHERE STRUGGLES DEFENDING THE RIGHT TO LIVES AND LIVELIHOODS OF THE PEOPLE ARE GOING ON!

The usual reportage of the killings of alleged Maoists—Ajitha and Kuppu Devaraj—in a ʹdeadlyʹ gun battle have possibly saturated the perception management exercises (as to how we see and understand) of the state and central governments. As the smokescreen settles, more and more questions abound about the veracity of the claims made by the Director General, Police Kerala or the local Malappuram SP and last but not the least Pinarayi Vijayan the Chief cum Home Minister of the CPM led LDF government, Kerala. Sifting through the narratives of the powers that be—the central home minister Rajnath Singh addressing police officers in Hyderabad or the statements of senior functionaries of the LDF government—one can see the policy of American exceptionalism getting articulated in various vocabularies by all apropos the modus operandi of dealing with the Maoist movement. In the doctrine of American exceptionalism the enemy that you have declared before the world can be done away with by hook or crook. It is the most convenient tool in the hands of the US to run rough shod of international law, the notorious way US imperialism has/had been terrorizing and inflicting untold miseries and barbarity on the peoples of the world—all in the name of saving US and hence the world from the imminent danger of terror and evil. Every international law or the UN charter is insanely and insidiously bent to make way for American exceptionalism which is nothing but the unbridled loot and plunder of the resources of the countries that US aspires to grab. And here in the Indian subcontinent, the same barbarity becomes the state of exception, increasingly an everyday experience for the people of Jammu & Kashmir (especially Kashmiri Muslims), Muslims in India, Dalits and Adivasis fighting for their lives and livelihoods and the Maoists who believe in and work for a society free from all forms of exploitation, domination and discrimination. No law or procedure in the Indian Penal Code seems to be applicable for the above mentioned. Rather impunity is the law for them—all for the sake of national security, national interest and that devious word development.

The tell tale marks of brutality on the bodies of the fallen political dissidents, unsoiled clothes despite their bodies being riddled with bullets, Ajithaʹs major injuries centred around her breasts let alone torture marks throughout the body, the obliterated testicles of Kuppu Devraj with torture marks all over the body and a botched up inquest followed by postmortem–all show a recurring infamy of exception in the conduct of the police/paramilitary with active patronage and protection from the ruling parties.

The police and the paramilitary had seen to it that no one would venture into the forest to check the veracity of the facts. In the meantime the intelligence agencies deliberately kept on feeding the media with incorrigible stories knowing fully well that a discerning mind can decipher the fact from the fiction. One is left with little choice other than to conclude that such intended feeding of the media with stories that underline the omnipresent reach and brutality of the State is to instill cynicism and fear in the minds of the people. There is hardly any intent or effort at being accountable or transparent to the society or the bounden need to uphold the law of the land. But as we can see the fear and cynicism of the very spectacle that state brutality and impunity have unleashed is unfortunately a double-edged sword which can strike either way. This is effectively explained by the LDF constituents desperately trying to outdo each other in showing up as the ruling party as well as the opposition. Not to be left in the lurch the otherwise hawkish Congress have pitch-forked their arguments demanding for a thorough judicial enquiry contrary to that announced by the chief minister or the crime branch level enquiry ordered by the DGP. Sensing the gravity of the situation the State Human Rights Commission also has ordered the police to submit a report within two weeks.

One canʹt expect anything tangible from such exercises indulged in by the LDF constituents or the UDF as it is very clear that there were clear-cut instructions from the top level leadership of the ruling government to physically eliminate the political leadership of the CPI (Maoist). The necessary crowding out of the space of opposition with oneʹs own constituents is reflective of the political fault lines that are there in the emerging scenario in the region. The peerless effort at perception management is evident as one of the ruling constituents, the CPI, sends its youth wing as a procession to the site of encounter to be stopped by the police! At the peril of being cynical one would hazard to say that the intentions of the CPI or for that matter the ʹCastro of Keralaʹ VS Achuthanandan will at best remain perfunctory in content and showboating in intent if there is no decisive intervention from the side of the ruling government vis-à-vis their policy towards Operation Green Hunt, their approach towards doing away with such draconian laws as UAPA.

The cynical spectacle is summed up in the irony of the former CPM Secretary Prakash Karat diligently condoling the death of Fidel Castro [maybe because he died of old age, far from being able to walk the talk (sic)] at the Cuban embassy in Delhi while the same day saw two bodies, one of a woman in her late 40s and the other of a man in his 60s clad in the clothes with the favorite colorof Castro lying unattended for more than 30 hours at the jungles of Nilambur in the northern district of Malappuram in Kerala.

The above-mentioned cynicism has profound basis as is evident in the follow-up arrest and trumping up of false charges on senior most peopleʹs activist, CRPP vice president and Maoist ideologue MN Ravunni. MN Ravunni is one of the longest serving political prisoners in Kerala for having adhered to a political ideology. Previously he had undergone more than 18 years in prison in Kerala. The real intention of the ruling LDF government and the palpable fear of the very spectacle it has created boomeranging is evident from this motivated incarceration of a political dissident in his mid-80s.

We at the CRPP demand the unconditional release of MN Ravunni. All the cases foisted on MN Ravunni and other political dissidents in Kerala should be withdrawn. We further demand the repeal of UAPA which is an anti-people law to criminalize and silence dissent. We further reiterate that a fresh postmortem strictly under the guidance set by the Supreme Court be initiated and an independent judicial enquiry be constituted to unearth the verities of the killings of Maoist dissidents in a time-bound manner.