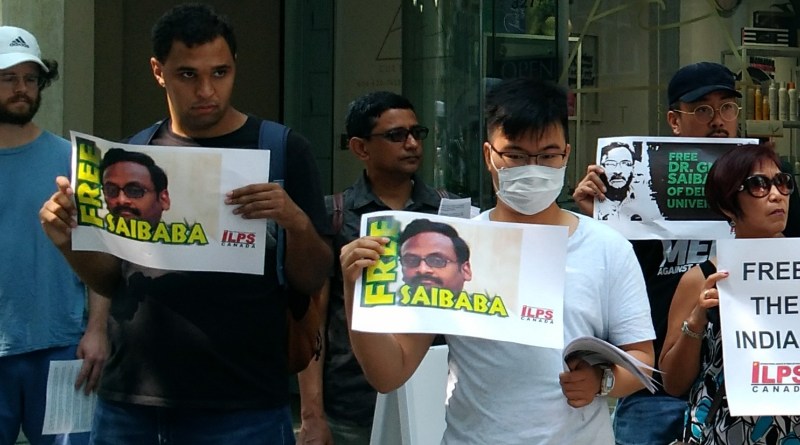 New Delhi/Mumbai: Former Delhi University professor, G.N. Saibaba, serving a life sentence for alleged Maoist links, has claimed that his deteriorating health and poor conditions at Nagpur Central Jail, where he is incarcerated, have reduced him to a “cot-ridden old man” and a “dump of shrunken flesh and dried bones”.

In a letter to his wife, the wheel-chair-bound Saibaba, who is 90 per cent disabled, has also alleged that he has been put on solitary confinement in a prison cell that does not address his disability needs.

“The very architecture of this prison renders me totally helpless. There is no accessibility for me in any aspect. I have been reduced to ‘a cot-ridden old man’,” he has written in his letter which has been accessed by ThePrint.

“Inside the cell, I cannot approach the toilet in my wheelchair. Two persons have to take me or hold me in my wheelchair to go for urine or defecation or for taking a bath,” he has added.

Saibaba’s wife, G. Vasantha, told ThePrint that jail authorities have allegedly refused to provide proper treatment for her husband who suffers from a number of ailments.

“My husband has a problem in his pancreas and recently developed a tumour on the lower portion of his body. The jail authorities refuse to give him proper treatment and they don’t know how to deal with a disabled person,” Vasantha said. “They have also kept him in an anda cell (solitary confinement), where there is hardly any space for him to move.”

Authorities at the Nagpur prison, however, denied Vasantha’s and the professor’s allegations, claiming that they always offered all necessary medical aid to Saibaba, but he has “steadfastly refused treatment”.

Saibaba, an English professor who taught at Ramlal Anand College in Delhi University, was arrested in May 2014 after police in Gadchiroli, Maharashtra, claimed that he had Maoist links.

Police had gone after Saibaba for allegedly being an ‘urban contact’ for Maoists, much before the current ‘Urban Naxal’ row, in which authorities arrested activist Gautam Navlakha and other Left-wing ideologues.

Saibaba was handed a life sentence by a Gadchiroli sessions court in March 2017, after being convicted under various sections of the stringent Unlawful Activities Prevention Act (UAPA). He has been lodged in Nagpur Central Jail since.

In his letter to Vasantha, Saibaba has written that he had fallen unconscious several times in prison, the frequency of which has increased in the last few days.

“Since July 12th, I have fallen unconscious three times. Before that, a total of eight times in a year till June,” his letter reads. “I have lost appetite. Not feeling to eat anything because the vomiting sensation keeps coming back (sic).”

The professor has also complained of not being able to sleep because of which he has been forced to take sleeping pills.

“The pain in the left side of the stomach has increased. The pain in my damaged left hand has also increased extremely. As a result, I am not able to sleep,” the letter states. “For the last 20 days I have been taking sleeping pills, Restyl, without which I am not being able to sleep at all due to the severe pain.”

Saibaba’s deteriorating health condition had prompted human rights experts from the United Nations to urge India to release him, earlier this year.

“We are concerned about reports that Dr Saibaba is suffering from more than 15 different health problems, some of which have potentially fatal consequences,” the experts said in a joint statement released in Geneva in July this year. The experts called on India to release Saibaba as he was in “urgent need of adequate medical treatment”.

India is yet to respond to the appeal.

Prison authorities at the Nagpur Central Jail denied the allegations and maintain that they have always offered all necessary medical aid to Saibaba.

“We have taken him to the hospital of the GMC Medical College, Nagpur, a number of times whenever required. But he has refused treatment each and every time, citing some reason or the other. All of this is on record,” said Yogesh Desai, DIG, prisons (eastern zone), Nagpur.

He added that the jail staff has even summoned specialised medical teams to the Nagpur jail whenever needed.

On one such occasion, Desai claimed, Saibaba said he would be willing to undergo treatment only if his family was present. “We immediately called his wife and requested her to come. He had a discussion with his wife and still refused medical treatment,” he added.

The official said allegations of Saibaba falling unconscious are also false. “He has not been unconscious even once,” Desai said.

Several activists, as well as his wife, have been petitioning the government to move the professor to Hyderabad citing his deteriorating medical condition. Desai said the request was not permissible as per central government guidelines as well as state rules because Saibaba has filed an appeal against his conviction in Maharashtra and it is still pending.