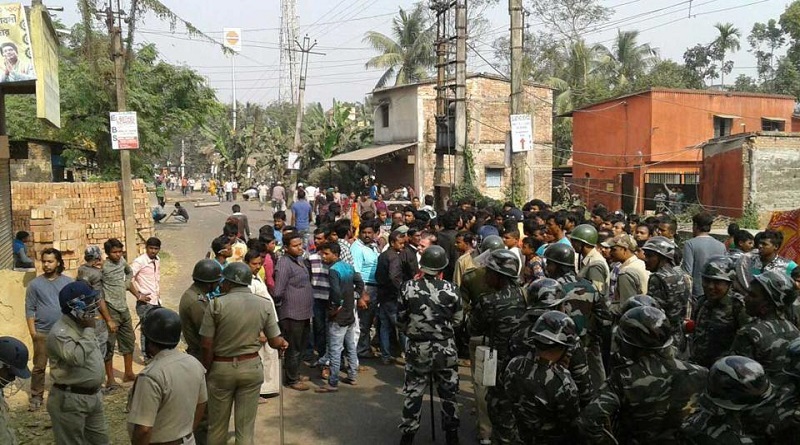 India People's War
January 19, 2017 Redspark Team CPI (maoist)
The Mamata Banerjee government is transferring all jailed Maoist leaders in the state to a high-security prison in Kolkata to prevent them from getting in touch with those agitating against a power grid project in Bhangar in South 24 Parganas district.

The Bhangar land agitation is easily the biggest embarrassment so far for the chief minister, who is a champion of farmer rights, and is being spearheaded by Jomi, Jibika, Poribesh O Bastutantra Raksha Committee (Committee to Protect Land, Livelihood, Environment and Ecosystem).

The committee is guided by CPI-ML (Red Star), a little-known Maoist outfit with alleged support from a section of ultra-Left students of Jadavpur University.

There are about 100 Maoist leaders and cadres lodged in various jails across the state. Thirty-nine of them have been brought to Presidency Jail in Kolkata, and officials said the process of transfer will continue. Kishenji aide Telegu Dipak and Chattradhar Mahato, the most visible face of the People’s Committee Against Police Atrocities in Lalgarh, are among them.

“The Maoists undertrials and convicts are being brought into high-security jail as a security measure. They are kept in cells, unlike other inmates who are kept in wards. Apart from 24-hour CCTV surveillance, we have doubled the number of guards. Their movement inside the jail is completely restricted,” a senior jail department official said.

The move was triggered by intelligence inputs that indicated the rebels might have been in touch with their comrades outside to help stoke farmer agitations in other regions of the state.

“Intelligence reports also indicated Maoists could have a hand in the Bhangar agitation that began to crystallise towards the end of 2016. We took no chance and kept the leaders in jail under tight security and surveillance,” a senior state home department official said.

Officials told Hindustan Times that frontal organisations are being used to silently build a base among farmers in Bhangar. The style and functioning of the protesters bear resemblance with the tactics used by ultra-Left forces in Nandigram (2007) and Lalgarh (2008) agitations.

On Tuesday, two people were killed and many wounded in clashes that broke out during protests, bringing back memories of the tumultuous days of anti-land acquisition agitations in Singur and Nandigram.

The Powergrid Corporation of India project is nearing completion on a 16-acre plot that was acquired a couple of years ago. Villagers are also objecting to high-tension lines passing over their land.

The Maoist movement burst forth on November 2, 2008, after an explosion targeted at former chief minister Buddhadeb Bhattacharjee in West Midnapore district missed its target.

Even during heightened Maoists activities in the state in 2009 and 2010, Maoists leaders were kept in different district jails.