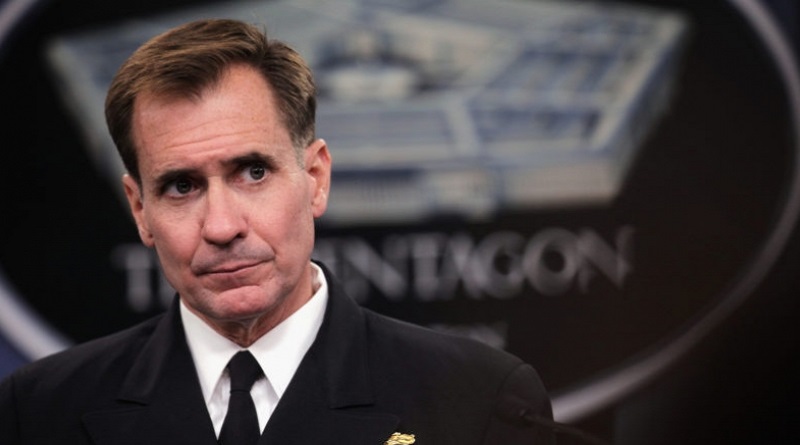 The Turkish Prime Minister Binali Yildirim visited Erbil and Baghdad earlier this week to discuss the PKK withdrawal from Sinjar and the presence of the Turkish army on Iraqi soil.

“We weren’t party to these meetings. Certainly, as we’ve said over and over again, we respect the sovereign right of the government in Baghdad to meet and discuss and have dialogue with neighbors and partners in the region, including Turkey,” John Kirby, the US State Department spokesperson said on Monday.

“We obviously look favorably on dialogue between Turkey and Iraq on a number of issues, but I’d leave it to leaders from both those countries to speak to what was discussed and what the outcomes were,” he added. “Only thing I would say is that the PKK remains a foreign terrorist organization. We recognize that the threat that they pose in the region and specifically to Turkey, and we continue to support Turkey in their counterterrorism efforts.

The US government opposes a presence of the PKK fearing Turkish interference and unilateral moves in Sinjar, Mosul and Tal Afar which could undermine the Mosul operation launched in October last year.

“We believe that the PKK, which is a U.S.-designated terrorist organization, should have no role in Sinjar. We regard their presence there as a major obstacle to reconciliation, as well as to refugee return, to the return of internally displaced people,” Mark Toner, a State Department spokesperson said on 27 December. “We believe that the government shares our concern over restoring stability in Sinjar and oppose the PKK presence there,” he added.

Turkey and Baghdad in the past disagreed about the presence of the Turkish army on Iraqi soil and Baghdad opposed any form of Turkish military participation in the Mosul operations that were launched on 17 October. Moreover, Baghdad feared Turkish unilateral steps in Tal Afar and Mosul, and also paid local Yezidi forces affiliated to the PKK in the past with salaries. This while Turkey was against any presence of the Kurdistan Workers Party (PKK) in the Yezidi region of Sinjar/Shingal, and the involvement of the Baghdad-backed Shia Popular Mobilization Units (PMU) in Tal Afar.

According to a joint statement the two sides signed a framework to ‘respect the sovereignty and territorial integrity’ of Iraq, and stressed that the Bashiqa is an Iraqi camp. “The Turkish side in Bashiqa will begin steps to withdraw troops and end this issue, and the Turkish side confirmed the commitment to Iraq’s unity and respect to its sovereignty,” the statement added.

Furthermore, the two sides stressed not to ‘allow the presence of any terrorist organizations on their soil’, and to work together in the fight against terrorism and ISIS in cooperation with the international coalition. However, the joint statement did not mention the PKK or any form of withdrawal of PKK fighters from Sinjar.

“Necessary steps will be taken to clear Sinjar from terrorist elements by Peshmerga and Iraqi Armed Forces. Your [Abadi’s] declaration that you will not let PKK do harm on Turkey through the lands of Iraq is of great importance for us,” PM Binali Yildirim said on Twitter on 7 January during hit visit to Baghdad.

“Our military presence in Bashiqa is a result of a need, not arbitrary. We have made a great progress in clearing the region from DAESH. Iraq’s sovereignty and territorial integrity is important for us,” he added.

“It’s a clear sign of Turkey to be in good terms with Baghdad. Bashiqa was illegitimate and not easy to defend,” Ali Özkök, an Eurasia-Analyst told ARA News, adding that the move was also welcomed by the Iranian government.

“But its also a conciliatory step by Ankara towards regional states and the Syria issue. Velayati [Ali Akbar Velayati, Iranian senior adviser] described the Turkish government’s decision to respect the principles of good neighborliness and Iraq’s territorial integrity as a ‘positive step’, hoping for detente in Ankara-Damascus ties as well,” Özkök said.

“According to the recent agreement, Turkey pledged to ‘respect the sovereignty of Iraq’ and that Baghdad and Ankara agreed not to interfere in each other’s domestic affairs. However, Ankara did not give any specific date for TSK redeployment. I assume the redeployment will still take time and will be measured according to actions taken against PKK,” he added.

On Friday, the Kurdistan Regional Government (KRG) said they reached an reached an agreement for a peaceful pullout of the PKK’s armed wing, the HPG (People’s Defence Forces), while the local PKK-affiliated units Sinjar Resistance Units (YBS) and the Yezidi Women’s Units (YJE) forces will stay in the region, the pro-KRG Rudaw agency reported.

However, on Monday the PKK denied the agreement and said it would not withdraw from Sinjar and that Sinjar should be protected by its people. Moreover, the group called on Turkey to withdraw all its troops and said it will not be involved in any Kurdish infighting.

Kamal Chomani, a Kurdish journalist and co-founder of Kurdish Policy, told ARA News that the YBS will remain in Sinjar and should not leave and that instead Turkish forces should withdraw from all bases in Iraq. “YBS remains in Sinjar, simply because YBS is a Yezidi force and should be supported and empowered within Iraqi army and Peshmerga. YBS represents the Yezidi people,” he said.

Chomani added that among the Kurdish parties in the Kurdistan Region only the Kurdistan Democratic Party (KDP) has problems with the PKK presence in Sinjar.

“The only force in Iraq that has issues with the PKK is the Kurdistan Democratic Party led by Masoud Barzani. Calls for PKK withdrawal are from the KDP, which has political and ideological conflicts with the PKK. The Patriotic Union of Kurdistan (PUK) led by Jalal Talabani and the Change Movement (Gorran) led by Nawshirwan Mustafa are for keeping the YBS and even the PKK in Shingal [Sinjar],” he added.

“Those who call on the PKK to withdraw from Sinjar don’t know that PKK has already started withdrawing. The PKK was never to remain in Sinjar,” he added.

However, the Turkish pro-government newspaper Daily Sabah suggests that the local YBS is affiliated to the PKK.

It is likely that tensions in Sinjar between the KDP and the PKK will continue, and that Turkey will continue to oppose any form of PKK presence in Sinjar and any PKK role in the fight against ISIS.