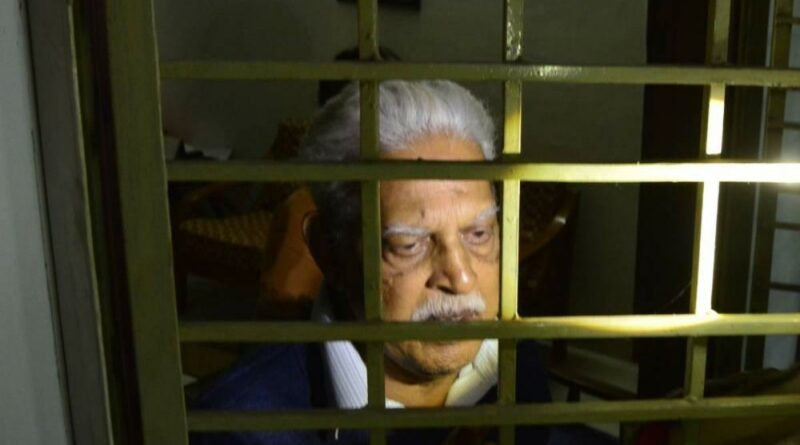 Nearly 60 Irish writers have sent a petition to the Irish Embassy in New Delhi and the Indian Embassy in Dublin protesting against the incarceration of Telugu poet Varavara Rao. The activist is an accused in the Bhima Koregaon case, and was arrested in 2018.

Last week, the Bombay High Court instructed authorities to shift the 80-year-old poet and political prisoner to a hospital in Mumbai for 15 days due to his deteriorating health condition. The court had also noted that he was almost on his deathbed.

“We note with alarm the deteriorating condition of poet Varavara Rao, imprisoned without trial in India,” the statement from the Irish writers read. “We the undersigned writers, in solidarity with the Telugu-language poet, ask you to convey our deep unhappiness with the situation to the powers that be in India. When you leave a poet in such conditions – without a change of catheter in three months – we have no alternative but to voice our implacable rage.”

The letter also noted Scroll.in’s report from last week that highlighted the poet’s ailments, including liver and kidney failure, and brain atrophy.

During the Bombay High Court’s hearing last Wednesday, Rao’s counsel Indira Jaising had described the poet’s health condition. “He has brain atrophy, his kidneys have failed.. what more do I need to show?” she said. “We do not have clinical reports to show your Lords… I can establish from the reports that his kidney has failed, his liver has failed, brain atrophy…This is a man who cannot even stand.”

Jaising said that Rao was being “detained in cruelty”. “Death is inevitable,” she said. “But everyone wants to exit in a dignified manner.”

On November 12, the Bombay High Court had only allowed Rao a medical examination through video conferencing, even as his counsel argued that he should be shifted to Nanavati Hospital. “He is bed-ridden. He is on diapers,” Jaising had said during that bail hearing. “He can’t control urination. He is with a urine bag. His catheter has not been removed. Is this man going to flee away from justice?”

In July, his lawyer had also told the Bombay High Court that Rao was almost on his deathbed. “Besides Covid-19, he suffers from several ailments, he is hallucinating and is delirious,” the lawyer had said.

In October, the poet’s wife, Hemalatha, had moved the Supreme Court for his release. She had said that his continued custody as an under trial amounts to cruel and inhuman treatment and is violative of his dignity. However, a three-judge bench headed by Justice UU Lalit refused to grant bail to the 81-year-old on October 29.

The Peoples Union of Democratic Rights on Thursday demanded Rao’s immediate release. The group said the Centre’s ongoing inquiry into the Elgar Parishad conclave of 2017 was a conspiracy that has sought to undermine the 80-year-old’s right to life and was “taking away his human right to dignity”.

Rao is among the activists and academics who have been accused of making inflammatory speeches at the Elgar Parishad conclave held at Shaniwar Wada in Pune on December 31, 2017, which the authorities claim triggered violence at Bhima-Koregaon war memorial the next day. He was arrested in August 2018.