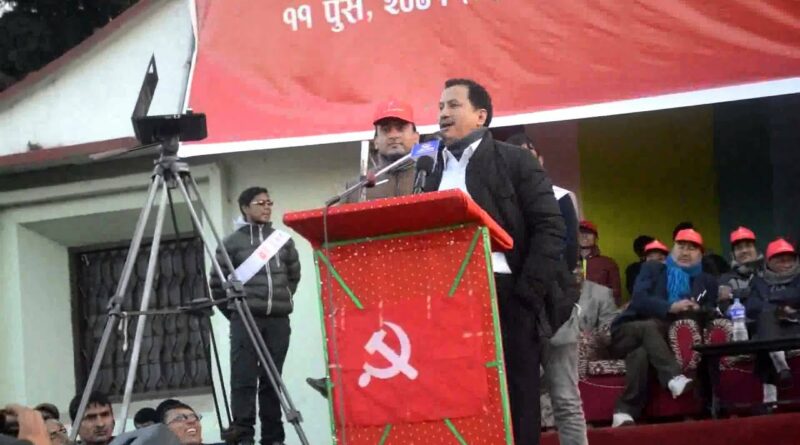 Udayapur District, November 26: Two cadres of the Netra Bikram Chand (Biplav)-led Communist Party of Nepal (CPN) have been arrested on the charge of carrying out the explosion in Tapli Rural Municipality of Udayapur district.

Police arrested Gaur Bahadur Devkota of Ruptar and Rita BK of Okhle, in Tapli rural municipality’s ward 5 and 1, on Wednesday.

A team of security personnel deployed from the Area Police Office detained CPN cadres Devkota and BK from their residence on Wednesday, according to Chief at Udayapur District Police Office (DPO), Superintendent of Police (SP) Bhim Bahadur Dahal. They were taken into police custody for an investigation into the explosion, he said.

CPN Udayapur district in-charge Vijay Ram informed media persons over the phone that two of his cadres were arrested. However, he did not reveal the charges laid on them. He did not respond when the media persons asked him whether Biplav-led CPN cadres were involved in the blast carried out in Tapli.

A bomb exploded damaging infrastructures in Tapli four days ago while a bomb disposal squad of Nepali Army defused another bomb.

It has been suspected that the CPN cadres carried out the blast after local representatives and government employees at the RM office refused to donate to the party. “We refused to donate as the CPN cadres demanded more than we could give,” one of the staffers at the office said on condition of anonymity, and added that the cadres frequently threatened to take vile steps.