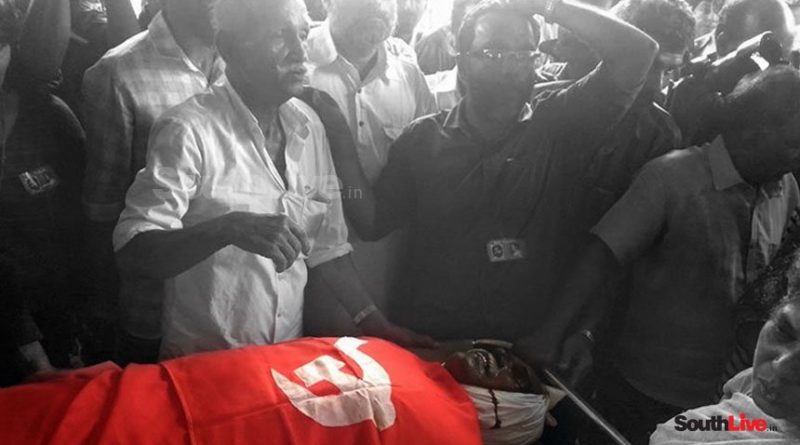 Human right activists and Maoist sympathisers bid adieu to slain leader of CPI (Maoist) Kuppu Devaraj in Kozhikode district of Kerala, resisting opposition from the Kerala police and BJP workers. Police denied permission to the human rights activists to lay the body at a public place in heart of the city. BJP workers also came out against the move. Later the activists numbering more than 100 gathered in front of the mortuary and draped the Maoist leader in a red flag and raised slogans praising their martyrdom and Naxalbari movement.

Earlier in the day, BJP and Yuva Morcha workers had warned that they would disrupt any attempt to organised public view of the body, after which the police had denied permission for it.

After mounting pressure from the rights activists, police was forced to agree on the demand to lay the body before the mortuary to enable sympathisers to pay homage to the Maoist leader.

Kuppu Devaraj and Ajitha, two leaders of the outlawed CPI (Maoist) was killed by the Kerala police in Malappuram District of Kerala on 24 November. As the right activists and kin of the deceased moved to court, it was ordered to keep the bodies in the mortuary.

Meanwhile, the Kerala High Court on Friday restrained the authorities till 13 December from cremating Ajitha’s body, which is kept in the same mortuary.

The Nilambur killing has spawned a debate on the police policy of the LDF government. While the CPI (M) desisted from criticising the police, the second biggest partner in government CPI has lashed out at cops and demanded a judicial enquiry. CPI leader Binoy Viswam reached the medical college mortuary and paid homage to the Maoist leader.