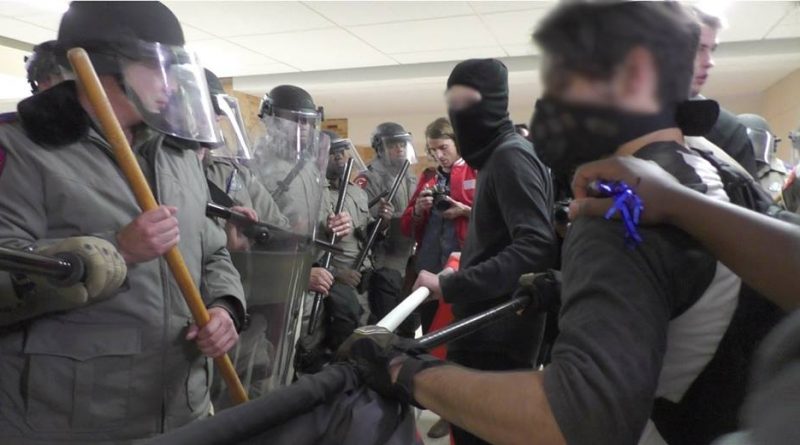 When the Revolutionary Student Front heard that neo-Nazi Richard Spencer would be speaking at Texas A&M University on December 6, we immediately began planning to shut him down, reaching out to anti-fascists and organizing a carpool to College Station. Widely known for his “Heil Trump!” salute, Richard Spencer is trying to make fascism mainstream as the “respectable” face of the “alt-right.” Trump’s election has emboldened and legitimized fascists like Spencer and led to a surge of racist attacks, making the fight against fascism more important now than ever. We are completely committed to denying fascists any platform by any means necessary. Fascism cannot be stopped through debate or the ballot, only with the bullet. Hitler became Führer despite a majority of Germans voting for his liberal opponent Hindenburg. Nonviolent resistance didn’t stop the Nazis; what stopped the Nazis was the military victory of the Red Army. Never in history has fascism been defeated with love.

Taking part in the demonstration against Spencer were Austin anti-fascists from Revolutionary Student Front, Serve the People, Revolutionary Alliance of Trans People Against Capitalism, Defend Our Hoodz, and Red Guards Austin, unaffiliated anarchists, and comrades from other cities including Dallas, San Marcos, and Houston, as well as unaffiliated A&M students and faculty. Members of Peaceful Streets Project were also present to film the police. We covered our faces in order to protect ourselves from police surveillance and fascist retaliation; fascists have often exposed anti-fascists to harassment and violence by publishing their names, pictures, addresses, jobs, and other personal information online. Even one unmasked person in a group can compromise others’ identities, which is why we encourage everyone to mask up.

Originally, we planned to attend the event and shut it down from the inside, chanting over Spencer to prevent him from being heard. But by the time we arrived, the event was full and security wasn’t letting anyone in without a wristband, something we didn’t anticipate. This was partially our fault; we needed to arrive early but failed to properly plan our action in advance and thus spent the time prior to the event planning. Additionally, all our contingency plans assumed that we could gain entry. While no plan can cover every possibility, this was a major oversight that had serious consequences.

Unable to enter, we joined the demonstration that was moving inside the Memorial Student Center (MSC) where Spencer’s speech was being held. We led chants to push the demonstration in a more militant direction, like “No love for Nazis,” “Nazi Nazi Nazi! Out Out Out!” and “What’s better than one dead Nazi? Two dead Nazis! [repeat, counting up]” This demonstration gave many students an education they’ll never get in any classroom, showing the people who are their friends and who are their enemies. The Texas Department of Public Safety deployed lines of state troopers in riot gear, with helmets, shields, batons, and shotguns, in order to keep the Nazis safe from the public. Campus police, Bryan and College Station police, Brazos County sheriffs, and even the FBI were also present. We saw similar behavior from the pigs at the attempted Nazi-organized “White Lives Matter” rally in Austin last month, when the state and city deployed hundreds of riot cops, as well as helicopters, snipers, and mounted pigs, to protect only a dozen fascists. When fascists don’t feel safe from the wrath of the people without an army of pigs watching their back, and the state knows it, that’s a victory for us. To be attacked by the enemy is a good thing, not a bad thing, because it proves we’ve achieved a great deal in our work and drawn a line in the sand between us and the enemy.

Chants of “Who protects the fascists? PIGS DO, PIGS DO,” “Cops and Klan go hand in hand,” “The hate, the hate, the hate inside of me / All cops are bastards, ACAB,” and “OINK OINK, BANG BANG” echoed through the halls as the pigs pushed the people back with riot shields and nightsticks. Pigs gave one comrade a concussion and arrested two others (they have now been released). But it was not only the police that proved themselves to be enemies of the people. Liberals—those who believe capitalism should be reformed and not smashed—reacted with chants like “Love not hate”. But we have absolutely no love for fascists, who want us dead and who see non-white people as subhuman and women as objects. We responded with chants like “No love for Nazis”; one liberal apparently didn’t love that, because she yelled “fuck you, bitch” at a comrade. Other liberals told us to take off our hats, as is the custom in MSC, though they didn’t seem to care about the helmets the riot squad was wearing. While the liberals showed themselves unwilling to take any action against fascism, they were eager to use force to help the pigs do their job of protecting white supremacy: some put their backs to the police line and helped them push us back, literally showing us which side they’re really on. This is not the first time we’ve seen behavior like this from “peaceful” liberals: at anti-Trump protests in Austin, while police were beating and arresting anti-fascists (breaking a comrade’s neck in two places), liberals cheered on the police and pointed out comrades to them for arrest.

Anyone who is serious about fighting fascism needs to understand the threat posed by liberalism and how to combat it. There are politically advanced, intermediate, and backwards sections of the masses. Hardcore liberals, like the ones who helped the pigs push us back, are part of the backwards, and must be isolated. Any liberals who try bullshit like that should expect to be held accountable. However, the majority of the masses are intermediate; they know something’s wrong with the world but don’t know what to do about it. Our task is to show them that the solution is revolution. It’s important for revolutionaries to go to demonstrations, even ones organized by liberals, and set an example for the masses with our militancy, organization, and courage. Liberals try to make a division between “respectable” protesters like them and “unrespectable” protesters like us, so that the “respectable” ones can get jobs and grants and the “unrespectable” ones can get concussions and jail time. Don’t allow liberals to form a separate bloc from militants or hold space uncontested, but instead join their bloc to move the action in a more radical direction. Bring a megaphone and/or get ahold of theirs. Chants like “FTP, fuck the police!” and “What’s better than six dead Nazis? Seven dead Nazis!” serve to draw a line in the sand between liberals and revolutionaries, causing some backwards liberals to leave while rallying the intermediate and advanced masses. Make sure to watch your back around liberals, because you can’t trust anyone who works with the cops.

Many errors stemmed from our failure to communicate effectively prior to and during the action. Though we were in touch with comrades from other cities before the action, we weren’t in communication with all of them, and we also failed to properly coordinate with them on the ground, making us less effective than we could have been. During the action, we had difficulty organizing a unified front, which resulted in us missing a critical opportunity to potentially press through near the ballroom door prior to the arrival of riot cops. We also didn’t designate a comrade to make on-the-spot decisions, which led to our bloc splitting up at some points instead of staying together. For future actions, we want to have a point person who can make such decisions for the group, as well as a designated communications person who is responsible for staying in touch with other comrades. When the riot cops (aided by the liberals) tried to box us in, we panicked and made a disorderly retreat down the stairs and outside the building, hindered by our lack of a command structure. After we realized that we left a comrade behind in the confusion, some of us split up and went back upstairs to make sure they were safe, which they were. After that, we erroneously decided to leave campus and head home, partially out of fatigue (some of us were tired and thirsty, something we should have prepared for better) and partially out of panic and fear, when we should have re-joined the demonstration, which was still going on. We hope to learn from these errors and improve, and we are discussing them publicly so that other comrades can also learn and avoid making the same errors themselves.