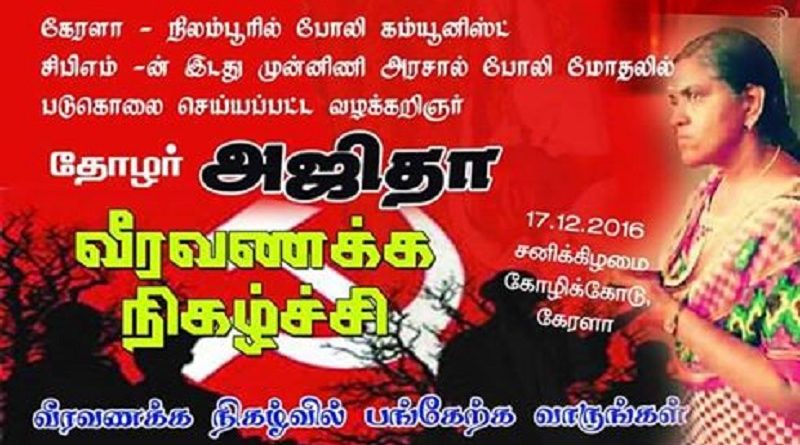 KOCHI: The Kerala high court on Friday granted permission for conducting burial services for alleged Maoist activist P Ajitha, who died in a fake encounter with a police task force at Nilambur, at a public burial ground at West Hill in Kozhikode.

Malappuram SP has been ordered to provide necessary assistance to Bhagavat Singh of Kodikulam in Madurai for taking the body kept at Kozhikode Medical College to the burial ground at 11am on Saturday. Seeking a directive to hand over Ajitha’s body to him, Bhagavat Singh had filed a petition stating that she was a friend and classmate.

The court has also directed that police should afford sufficient opportunity to the petitioner as well as the friends and relatives of Ajitha to pay last respects. Further, the petitioner has been directed by the court not to create any law and order situation nor raise any anti-government slogans. A peaceful burial should be held by cooperating with the instructions given by police, the court said.

A direction to hand over the body to the petitioner was issued by the court after he contended that the body is to be handed over to friends if relatives don’t exist or if they don’t claim for the same. During the hearing, government had informed the court that a decent burial can be given to her in the presence of the petitioner as was done in the case of Kuppu Devarajan alias Kuppuswamy, who was killed along with Ajitha. Two hours can be granted for allowing the petitioner and others to pay last respects to her, government had submitted.