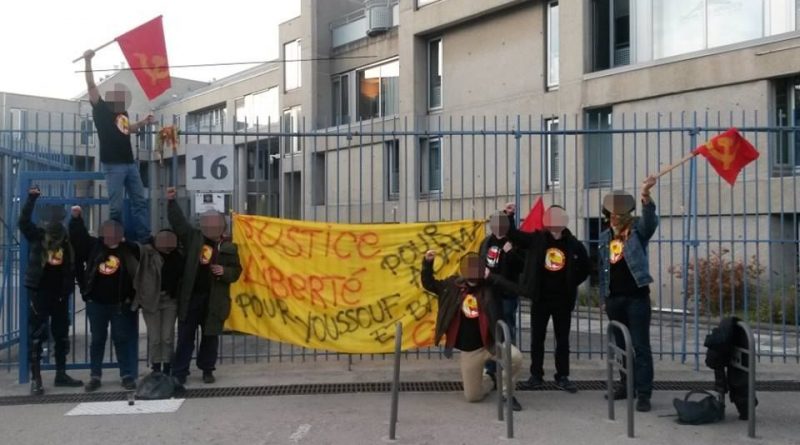 Picture: Banner deployed in front of the court of Clermont-Ferrand at the initiative of the CARA (Cellule Antifasciste Révolutionnaire d’Auvergne)

This Wednesday the trial of the Adama brothers, Youssouf and Bagui, who spent more than 3 weeks in pre-trial detention, took place. They were accused of contempt, rebellion and making death threats, accusations based on zero proof. Despite the totally contradictory testimony of the cops, they were both sentenced to imprisonment, for Youssouf, a reduced sentence of three months, for Bagui, eight months plus two years of no-entry in Beaumont, to, as they said “bring back the serenity there”. Well, the Traore family, the people of Beaumont and all the support that has been built around them has only one answer: without justice, you will never have peace! Traoré family, keep it strong! We will continue to be there to support you as we will for all victims of police killings and violence. A meeting at the CICP in Paris which brought together more than 200 people, was organized by the family on the same day as the trial to follow its proceedings in live, a family that will continue to mobilize! Moreover, there are more than 7000€ in damages that the Traoré must pay to the so-called “victims”. To help them financially, an online donation site has been set up.

Justice for Adama! Freedom for Bagui!

Where there is oppression, there is resistance!