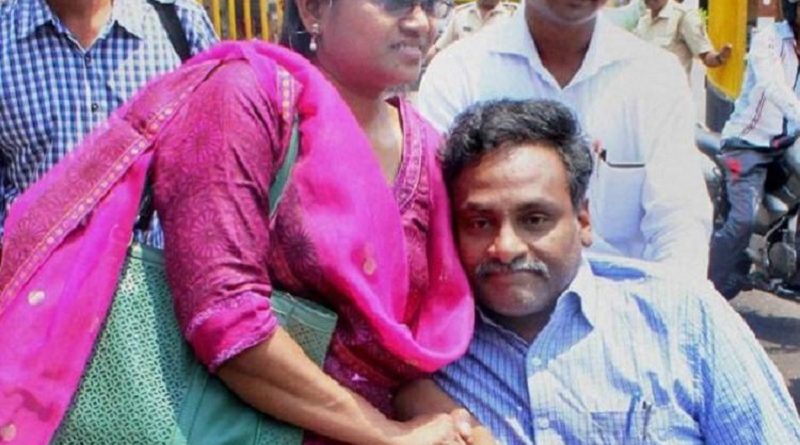 The wheelchair-bound former English professor was convicted in March this year for his Maoist links and for “waging war” against the country.

Eight months after former Delhi University Professor GN Saibaba, who is 90% disabled, was sentenced to life imprisonment, he has written a letter to his wife stating that he will not survive the coming winter.

The wheelchair-bound former English professor at Ram Lal Anand college was convicted for his Maoist links by a sessions court in Maharashtra in March this year.

In the letter to his wife Vasantha, Saibaba, who is lodged at the Nagpur Central Jail, writes, “I am frightened to think of the coming winter. Already I am shivering with continuous fever. I do not have a blanket. I do not have a sweater/jacket. As temperature goes down, excruciating pain continuously in my legs and left hand increases. It is impossible for me to survive here during the winter that starts from November. I am living here like an animal taking its last breaths. Somehow 8 months I managed to survive. But I am not going to survive in the coming winter.”

In the letter that appears to be have been written in late October, Saibaba urges his wife to finalise his legal counsel at the earliest and asks her to inform his advocate, Surendra Gadling, to file his bail application in the first week of November or last week of October.

“You remember if this is not done in this way, my situation will be out of hands. I am not responsible. I am making clear to you. Hereafter I am not going to write about it any longer,” reads his letter.

Saibaba goes on to note that no one is able to understand the struggle and condition of a 90% disabled person who is behind bars. Calling it criminal negligence, he writes, “I am feeling so depressed for requesting you all so many times like a beggar, a destitute. But none of you are moving an inch, no one understands my present condition. No one understands 90% disabled person is behind bars struggling with one hand in condition and suffering with multiple ailments. And no one cares for my life. This is simply criminal negligence, a callous attitude.”

He concludes his emotional letter by asking his wife to take care of her health.

In an interview with DNA, Vasantha alleged that her husband was not receiving basic medicine and that his health was deteriorating. She also said she would visit Saibaba in jail on November 14.

In March this year, Saibaba along with four others, including former JNU student Hem Mishra and journalist Prashant Rahi, were sentenced to life imprisonment by the Gadchiroli Sessions Court in Maharashtra for their Maoist links and for “waging war” against the country.

Saibaba was first arrested in May 2014 from his residence in Delhi based on ‘incriminating material’.

According to The Wire, JNU student Mishra had told police during interrogation that he had acted as a courier between the professor and Maoist leaders.

The former professor was, however, granted bail after 14 months in jail. In March 2016, the Supreme Court had granted him bail on health grounds after his bail application had been rejected by the Bombay High Court, reported CNN News 18.

The apex court also went on to accuse the Maharashtra government’s counsel, stating “You have been extremely unfair to the accused (Prof Saibaba), especially given to his medical examination.”