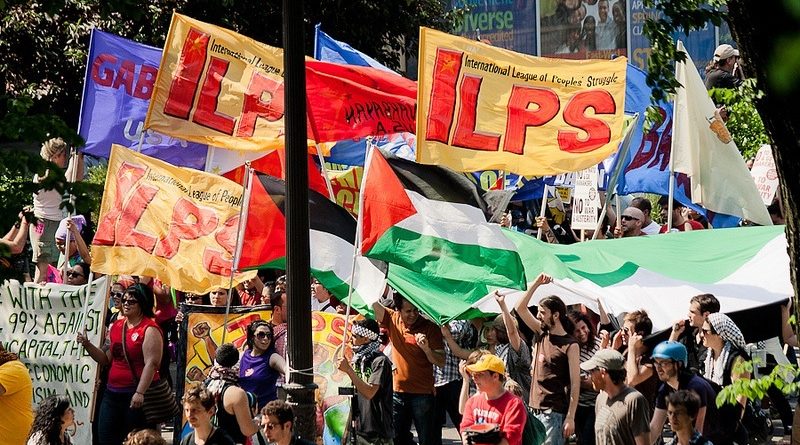 We, the International League of Peoples’ Struggle (ILPS), expresses our outrage over the arrest of anti-imperialist poet-activist Varavara Rao and other prominent progressives in India in August 28. The others are Vernon Gonzalves, Arun Ferreira, Sudha Bahradwaj and Gautam Navalakha.

The arrest followed after the homes of these activists were raided due to the absurd allegation of their involvement in a plot to assassinate Prime Minister Narendra Modi.The simultaneous raids of Rao’s and other’s residences in multiple cities were the latest in a spate of crackdown by the Modi regime against activists and progressives.

Last June, four activists – Sudhir Dhawale, Rona Wilson, Shoma Sen and Mahesh Raut – were earlier arrested. Meanwhile, Prof. G N Saibaba is still languishing in jail since 2014. The Modi regime and its police force are using the violence in Bhima-Koregaon in December 2017 as pretext for the arrests.

In the incident, one person died and scores were injured after right-wing groups countered the Dalits’ celebration of Elgaar Parishad. The Modi regime subsequently fabricated the discovery of e-documents detailing the preposterous assassination plot on Modi and used it as the false basis for the crackdown.

The wave of arrests against urban-based progressives and anti-imperialists shows the rapid descent of the Modi regime to fascism and authoritarian rule. The Modi regime is using the Unlawful Activities Prevention Act and the allegation of “Maoist” links against those arrested

The fierce crackdown on the prominent democratic and progressive activists o9s calculated to discourage and suppress the growing opposition of the Indian people to the Modi regime. The broad mass of the people, including the workers, peasants, dalits, the indigenous peoples, women, students and professionals, are in uproar over economic, political and social concerns.

Varavara Rao and others are not terrorists but staunch progressives and anti-imperialists who have been critics of anti-people, pro-imperialist neoliberal globalization and war policies of successive regimes in India. They have also been active in forging anti-imperialist solidarity with people’s movements in other countries.

Rao, in particular, keynoted the Third General Assembly of the ILPS. When he was not allowed by Indian authorities to travel, his keynote address was read by Prof. Saibaba. Rao is an outstanding Indian poet and he has translated the poems of Filipino poet Jose Maria Sison in Telugu.

We, the ILPS, stand in solidarity with the struggling people of India and condemn all forms of repression and fascist attacks against the people’s movement in India. We demand the unconditional release of Rao and his fellow activists and the dropping of fabricated charges against them. We are in unity with the multitude of groups in India and overseas demanding for their release and for the defeat of Modi’s authoritarianism and fascism.

Stop the crackdown! Activists are Not Terrorists!
Release Varavara Rao and all political prisoners!
Fight the authoritarian and fascist rule of the Modi regime!
End imperialism and fascism!
Long Live International Solidarity!

Issued by the Office of the Chairperson
International League of Peoples’ Struggle
September 5, 2018