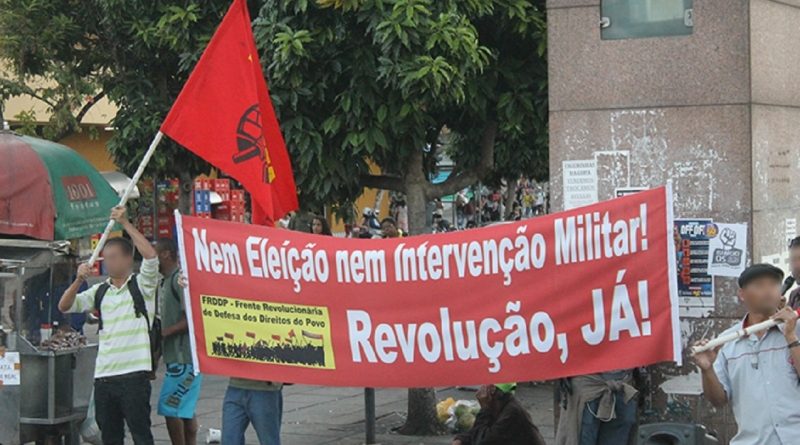 Several supporters of the A Nova Democracia [AND] newspaper held a large publicity brigade as part of the campaign to boycott the election farce, inaugurated there on August 31. A big red banner with the slogan No election, no military intervention! Revolution, now!, signed by the Revolutionary Front for the Defense of the Rights of the People (FRDDP), was raised in Station Square, downtown in the capital of Minas Gerais, during the late afternoon.

Participating in the brigade were the Popular Women’s Movement (MFP), the Popular Revolutionary Student Movement (MEPR), supporters of the League of Poor Peasants (LCP) and the Union of Civil Construction Workers of Belo Horizonte and Marreta, as well as the FRDDP.

During the brigade, supporters reported that the newspaper’s latest edition is on sale biweekly on the top 20 newsstands downtown and made a distribution of courtesy editions stamped with the address of their headquarters.

The public stopped, debated and showed support for the initiative; many congratulated the newspaper for their perspective on the development of the class struggle in the country and for their tireless struggle to unmask opportunism and revisionism, which try to deceive the people.

The representative of the Workers’ League greeted the companions of the Committee to Support AND as well as the people passing through the Square towards the subway, denouncing the situation experienced by the workers in Brazil and calling the people to the need to organize a General Strike. He also welcomed the slogan adopted by the FRDDP, No Election or military intervention! Revolution, now!, saying it must be adopted by all to make clear to our enemies that we will not delude ourselves with “saviors” of the motherland, let alone fall into the tale of the Yankee coup and militiaman.

The representative of the MEPR welcomed all and congratulated the initiative of the companions of the Committee to Support AND. He said that it is the task of all the revolutionaries, democrats and fighters of the people to support this instrument, which seeks to show in its pages the struggle of the people. He also denounced the policy of public education reform and the National Curricular Common Base, calling on the people to unite with students, teachers and the school community to stop these attacks and stop the scrapping of education. Finally, he reaffirmed the need for the people to boycott the electoral farce, claiming that the elections have only one purpose: to deceive the people and to restrain them in their struggle, because whenever they start to stand up, an electoral opportunist appears to direct them to resolve things through parliament.

The fiasco of this rigged card game, he said, is already resounding according to the forecasts of the monopoly’s own search engines. The coup-planning and Yankee-bootlicking military devises an action within constitutional “legality” and seeks a popular appeal to execute it, and therefore bets on the disorder (lack of command) of the bureaucratic state. This is true even though it has been demonstrated in practice that this military intervention does not solve anything, it only increases the violence against the people (as it has happened in Rio de Janeiro, where killings from “confrontations” and so-called “self-defense” have risen sharply).

In the end, many people were debating with the comrades of the Committee, congratulating them for the deeds and courtesy of the newspaper, as well as checking the opening hours of the Committee, which is located at Rua Tamoios, 900 – sala 07 and operates Monday through Friday, starting at 2.30pm. Tel. 3456-0850 E-mail: [email protected] 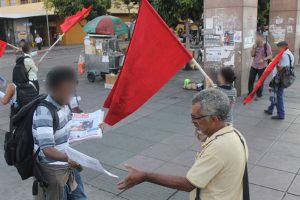 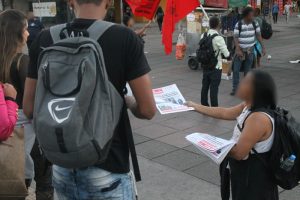