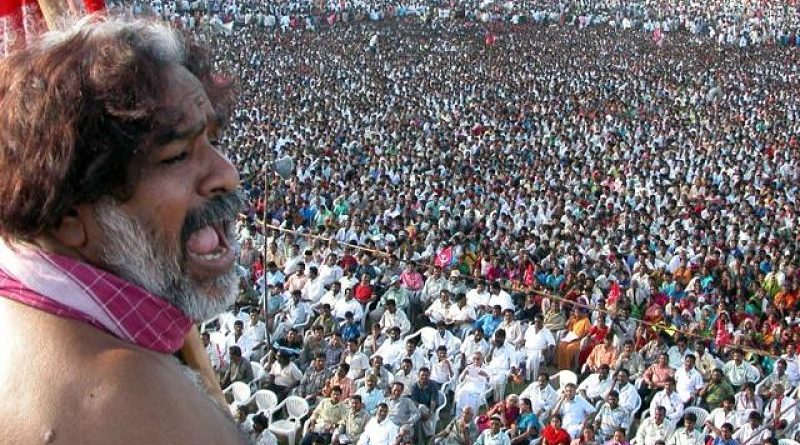 “Nobody can stifle the voice of people who question the oppressive policies of the rulers. The protesting voice cannot be caged; hanged and silenced with bullets. It continues to remain alive in the hearts of the millions, who continue to protest the repression,” says revolutionary balladeer from Telangana Gummadi Vithal aka Gaddar.

An engineering student-turned-bank employee-turned-revolutionary singer from Toopran in Medak district, 67-year-old Gaddar, who took his name from the famed Gadar party of Punjab during the pre-Independence era, has been inspiring lakhs of people in the Telugu states by raising his voice against the ruling class, irrespective of their political affiliation, through his songs. Even at this age, whenever Gaddar addresses a rally, it attracts thousands of masses from across the length and breadth of the state.

Founder of Jana Natya Mandali, a cultural wing of CPI (ML) People’s War (now known as the Maoist party), Gaddar had to face brutal repression from the police and go underground for over four years. He survived an assassination attempt in April 1997, when unknown miscreants, allegedly police, fired at him. “When my songs hit the government like bullets, the police tried to silence my voice by firing bullets at me. I still have a bullet embedded in my body and I feel it is a symbol of state repression,” he said.

At present, Gaddar is not actively associated with the Maoists, but he continues to champion their ideology and fight against Operation Green Hunt taken up by the state government against Maoists. He played a very pro-active role in spearheading the movement for separate Telangana state in different stages through his songs.

“Song is a powerful tool to highlight the injustice meted out to oppressed classes. It is the life of rural folk. Many singers had to give up their lives fighting for the cause of masses, but their songs remain alive among the people. I am overwhelmed by the recognition given to American protest singer Bob Dylan in the form of Nobel Prize for literature. I feel it has given a new lease of life to singers like me,” Gaddar says.