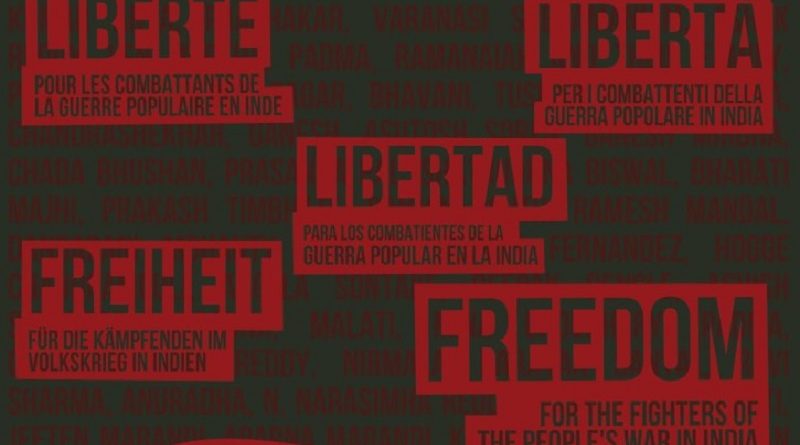 Scrap UAPA and sedition charges on activists and students by the CPI (M) government in Kerala!
Release all arrested activists!
Expose the anti-people fangs of CPI (M)!
Repeal UAPA and all other draconian laws!
Release all Political Prisoners!

Since the cold blooded murder of 2 Maoists, Ajitha and Kuppudevaraj, by the CPI (M) government in Nilambur in Kerala on 25th November, thousands of people in Kerala have come out on the streets demanding judicial enquiry into the so called “encounter”. For days, hundreds protested outside the Kozhikode Medical College, where the bodies of the slain Maoists were kept, against extra-judicial killings and state violence. The last one month witnessed many activists, students, intellectuals and common masses rallying against the reign of “encounter” killings beginning to be unleashed now by a so-called left democratic government in Kerala. Even protests and demonstrations against the Nilambur fake encounter were confronted by the government with brutal lathi charge and police atrocity. Giving complete impunity to the police to track, kidnap, arrest and even murder activists, intellectuals and students, the CPI (M) government in Kerala is baring its anti-people fangs with each passing day. Meanwhile the CM of Kerala, Pinarayi Vijayan and his coterie of leaders are busy shifting their blame on the police. A state which kills its political opponents in pre-meditated “encounter” killings and arrests those who dissent under draconian laws like UAPA is not a democratic state. DSU condemns the spate of violence unleashed by the CPI (M) government in Kerala. We must expose the double standards of this pseudo-left force which cries hoarse against state violence, draconian laws and even shed crocodile tears after the Bhopal fake encounter. But in Kerala where CPI (M) is in power, these shameless and degenerate forces resort to killing people in fake encounters and arresting and framing activists under draconian laws like UAPA. In all this, their actual agenda of furthering the interests of brahmanical ruling classes in the name of culling out “Maoists” from the state is clear for all to see. Similar to the fake encounters in Chhattisgarh, Bhopal and Malkangiri, this time, the fake encounter in Nilambur followed by the spate of arrests of activists and students in Kerala fully exposes the farce of CPI (M) and their actual allegiance to the BJP led central government.

Following the footsteps of the previous UDF government, the present LDF government is busy branding each and every voice of dissent as “Maoists”! As if to aggressively display its brute might, in response to surmounting protests against state violence, the CPI (M) government has brutally escalated its spate of violence on people by arresting and witch hunting democratic rights activists, intellectuals and students and framing them under draconian laws like the UAPA. In the last month alone, more than ten activists and intellectuals were arrested by the Kerala government. An activist of Porattam, Shantolal, was arrested and framed under UAPA for pasting posters calling for election boycott. Even guaranteed by the constitution, the right to boycott election and campaign is a democratic right of every citizen. Another senior activist, Ravunni, a popular mass leader, who has been active in various protests and democratic struggles in Kerala was illegally detained from Kozhikode Medical College when he along with others were protesting against violation of proper procedures while conducting the post-mortem of the slain Maoists. He was then secretly taken to Wayanad and declared arrested under UAPA. Comrade Ravunni has been at the forefront of many struggles for the release of political prisoners in Kerala. And his illegal arrest and framing under UAPA is a brazen attempt by the anti-people CPI (M) government and their cronies to criminalise dissent. As if not enough, the on-going targeting and branding of activists and students have reached ridiculous proportions with the suspension of Rajeesh Kollakandi, a government employee, from service followed by his arrest under UAPA for renting a room for Ravunni and helping the ailing mother of Kuppudeveraj. The Kerala Police even disrupted and raided the Kannur District Committee Meeting of a democratic organisation, Manushyavakasha Prasthanam (Human Rights Forum). In the most recent arrests, the Kerala government arrested 5 students of Maharajas College, Ernakulam for writing the poetry of Kureepuzha Sreekumar on the walls! This on-going frenzy of branding and arrests by the Pinarayi Vijayan led CPI (M) government in Kerala in a bid to terrorise the middle class will even put the Modi-government to shame. DSU condemns the arrests of activists and students under farcical charges by the anti-people CPI (M) government. We demand that all charges under UAPA against them must be dropped and the arrested activists must be released immediately and unconditionally.

Not only activists, even intellectuals and writers have come under the scanner of the state in Kerala and the dagger of sedition and UAPA hangs as a threat on all those who have been criticising the state violence unleashed by CPI (M). The recent arrest and later release of writer, Kamal C Chavara, for supposedly disrespecting the national anthem through a facebook post was part of this sheer display of brute power to silence voices of dissent. Another writer and blogger, Nadeer Gulmohar was arrested by the police for merely visiting Chavara in the hospital. Just a week before, 6 people were arrested during the International Film Festival held in Thirvananthapuram in Kerala for not standing up for the national anthem. Propping the bogey of nationalism, the CPI (M) government in Kerala is belligerently unmasking its ruling class character. The same CPI (M) who takes oath in the name of the Punnapara Vayalar struggle and its martyrs, betrayed peoples’ struggle to join the parliamentary path with shallow claims to advance class struggle and has now exposed its politics of class oppression.

The use of draconian laws like UAPA to silence and crush voices of dissent is the tactics of an authoritarian state. The CPI (M) has been part of joint struggles demanding to repeal UAPA and all draconian laws in other parts of the subcontinent. But typical of its political opportunism and anti-people character, in Kerala they have resorted to the use of these very same draconian laws to suppress voices of dissent. An incarnate of the previous Terrorist and Disruptive Activities (Prevention) Act (TADA) and later Prevention of Terrorism Act (POTA), the Unlawful Activities (Prevention) Act (UAPA) is a law that carries with it the awful vestiges of colonial rule which established itself through violent suppression to eliminate resistance. TADA was introduced in 1985 to curb the Sikh movement in Punjab. Giving unrestrained power to the police, under TADA the police could effectively accuse anyone of being an enemy of the state and arrest them without any evidence. The police could detain anyone at random and confessions in police custody were considered admissible in court according to TADA. And the onus of proving innocence was on the detained person. Thus emboldened with unchallenged power, the police raped, tortured, murdered and perpetrated atrocities against many Sikhs in Punjab under TADA. But despite these severe violations of basic democratic rights which in fact led to the scrapping of TADA in 1995, POTA was enacted in the aftermath of the December 2001 attack on Parliament. POTA’s definition of what constituted a “terrorist act” was too broad, criminalising even political activism. Similar to TADA, this law also permitted prolonged detentions without charge and reversed the presumption of innocence which is the bedrock of the criminal justice system. After strong opposition, the Manmohan Singh government was forced to repeal POTA in 2004. But the UPA government reintroduced these draconian laws in all but name with the amended UAPA in 2008 carrying all the stringent provisions of TADA and POTA. Anyone who the police suspects of carrying thoughts of crime even without having committed any crime can be arrested without bail under UAPA. That is, the presumption of plausible crime is enough to arrest someone under UAPA. Completely overturning the basic premise of justice which is innocent until proven guilty, those arrested under UAPA are considered guilty until proven innocent thus bearing not only the burden of police atrocity but also having to prove their innocence. The draconian UAPA is nothing but a weapon used by an authoritarian state to curb and imprison voices of dissent. Used indiscriminately against adivasis, dalits, muslims and political activists earlier by UPA government and the present NDA government, the ongoing arrests under UAPA in Kerala exposes the cunning of CPI (M) government headed by Pinarayi Vijayan and their alliance with the Hindutva fascist forces at the helm of power.

Even in our campus, SFI and JNUSU leadership have maintained criminal silence on the UAPA arrests in Kerala despite their claim to stand with JNU and against state repression and draconian laws in the aftermath of 9th February. SFI must clarify its position on the UAPA arrests of 5 college students and other activists in Kerala. With their tall claims during JNUSU elections, how are these forces going to advance the fight against Hindutva fascism when their own government is unleashing violence on the people and arresting activists under UAPA in Kerala? DSU condemns the anti-people assault by CPI (M) government in Kerala and demands the release of all arrested activists. We also demand that the farcical charges of UAPA against Ravunni, Shantolal, Rajeesh and 5 students of Maharajas College are dropped immediately.