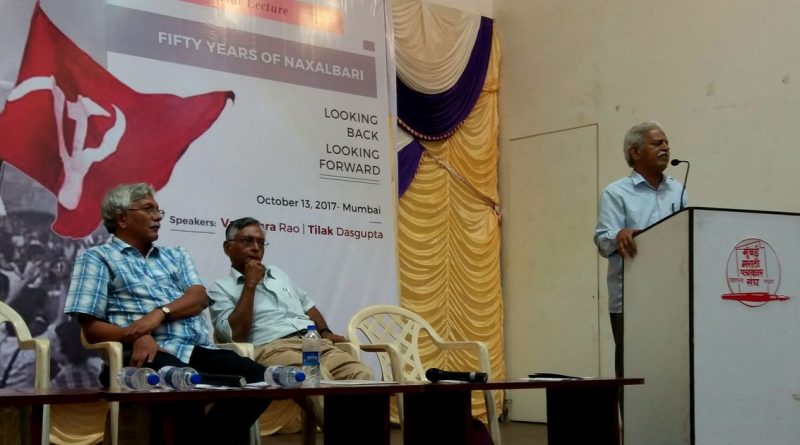 On Friday, the Legal Rights Observatory had threatened to disrupt an annual lecture series in honour of a Communist leader.

A lecture to mark 50 years of the Naxalbari uprising was conducted smoothly in Mumbai on Friday evening despite threats by a right-wing organisation to disrupt the meeting.

Three days before the event, members of a right-wing group called the Legal Rights Observatory wrote a letter to the Mumbai police commissioner urging that the ninth Anuradha Ghandy Memorial Lecture be cancelled.

The public lecture series is conducted every year in honour of Anuradha Ghandy, one of the founders of the Communist Party of India (Marxist-Leninst). Ghandy died of cerebral malaria in 2008 while working with tribal women in Jharkhand. The event features various speakers – often intellectuals and activists from the Left – to speak on socially relevant issues.

This year, to mark the half-centenary of the revolutionary Naxalite movement, the lecture organisers invited revolutionary poet and writer Vara Vara Rao from Andhra Pradesh and veteran left-wing leader Tilak Dasgupta from West Bengal. It was held at the Mumbai Marathi Patrakar Sangh in downtown Mumbai.

In its complaint to the police commissioner and in a Whatsapp forward demanding action against the Mumbai Marathi Patrakar Sangh, the Legal Rights Observatory group claimed that the Patrakar Sangh was providing a venue for a “notorious anti-Indian terror group”.

“Officers from the police’s Anti-Terrorism Squad also landed up at the venue a couple of days before the lecture and asked for a cancellation of the event,” said Gurbir Singh, a member of the Anuradha Ghandy Memorial Committee.

When the Patrakar Sangh refused to cancel the booking of the event, the right-wing group threatened to disrupt the lecture. However, the lecture sessions on Friday eventually progressed without any interruptions, with over a 100 people in attendance.

The managing committee of the Patrakar Sangh said that it stood its ground after verifying that the Memorial Committee is officially registered as a trust with the Charity Commissioner. “The Home Ministry has a list of banned organisations that we cannot give out our venue to, but this Memorial Committee was not one of them,” said Narendra Wable, the head of the Patrakar Sangh’s managing committee.

Wable pointed out that the Patrakar Sangh had served as the venue for the Anuradha Ghandy Memorial Lecture in 2015. “A lot of right-wing groups have been allowed to rent the Patrakar Sangh venues for their press conferences, so how can they object?” he said.

The Anuradha Ghandy Memorial Committee has faced threats from the right-wing in the past as well. In 2012, when author and activist Arundhati Roy was to speak at the Lecture in Mumbai’s St Xavier’s College, the police had warned the organisers that the Shiv Sena would attack the event. “But we carried on with the lecture anyway,” said Gurbir Singh.

Friday’s lecture, too, went off without disruption even though the organisers had decided against opting for police protection.

Speaking at the memorial lecture, writer Tilak Dasgupta described the 50-year-old Naxal movement as one that is about the revolutionary seizure of power by the people, and a movement that has brought peasants, workers, Dalits and Adivasis to the forefront of the political arena, as independent actors.

“Whatever has been achieved in this movement is through struggle from below,” said Dasgupta, who believes the way forward for the Naxal movement is to resist and target the “big bourgeoisie” of corporations that are destroying small-scale economies in India. “Our country’s political environment has now distinctly shifted to the right, and we need to strategise about how best to use available democratic spaces to expand the reach of the left.”