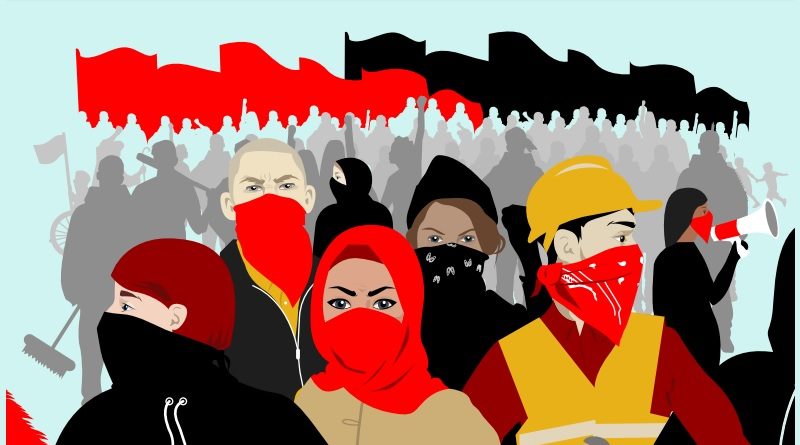 The nazi organization ”Nordic Resistance Movement” (NMR) is coming to march in Tampere on Saturday 21st of October, ostensibly ”for freedom of speech”. Also ”Soldiers Of Odin”, the street patrol organization founded on NMR’s permission, and the South-Ostrobothnian district of the ”Suomen Sisu” which has influenced also the government of Sipilä, have announced that they’re coming to support the NMR’s march. To protest and resist this, a counter-demonstration ”All of Tampere hates nazis” has been called, which we want to strengthen from our own standpoints. We don’t tolerate nazis’ freedom of speech, because we don’t tolerate any freedom for nazis. Come to construct combative antifascism uniting around the interests of the working class and oppressed masses!

The NMR is a nazi organization lead from Sweden and functioning also in Finland and Norway, the main programmatic goal of which is the unification of Nordic countries into a fascist federation. However, more alarming than its programmatic goals is its terroristic political practice, that converges in its special way with the wider fascistization of the society. Also, the fascist practice of the nazis has to be distinguished from the verbiage masking it. Victorious antifascism is guided by a correct understanding about fascism in general, and to beat the NMR its special role in fascism must be understood correctly. In short: fascism is counter-revolutionary and its class character is bourgeois, and in the currently developing Finnish fascism the NMR represents its most terroristic wing. The most exploited and oppressed masses have the most burning need to oppose fascism in general and the NMR specifically.

To effectively resist the activities of the NMR, the difference between friends and enemies must be made clear, a correct assessment of the situation must be made, and the raw truth must be published. The situation is not that the nazis are trying to get a foothold in Tampere. The situation is that practically entire Tampere is free for nazis to use. They have a secret office and the freedom to appear almost anywhere and anytime they want, and only rarely have they had to expect resistance or punishments. Against us is not only the NMR, but also larger powers supporting and enabling their and other fascists’ activity, the biggest of which are our ruling class the bourgeoisie and its state. To lean on them is both ineffective and suicidal. All gestures that the fascistizing authorities present against the ultra-right, prepare the repression of antifascists. Antifascist organizing and struggle is also hampered by variously manifesting liberalism, which even at its best would only allow us the most narrowly defined self-defense. As we dare to struggle and as victories are gained against fascists, the whole capitalist social system from its ”civil society” to the state will confront us. Victorious antifascism narrows the power of the bourgeoisie. It’s a treason against the republic of Finland. Antifascism can’t be accommodated to the norms of the bourgeois state and the bourgeois media, because that would mean the liberalization of antifascism and eventually its fascistization.

Thus, strategically speaking, we start outnumbered, one against ten. Therefore on the tactical level it’s necessary to gather ten against one as often as possible, as now when we strive to resist the nazi march. It’s necessary to start breaking out from the boundaries set by the bourgeois state and the bourgeois media, and demonstrate readiness to break against bourgeois legality and acceptability. Antifascist struggle is from the beginning and concretely class struggle. The lebensraum of the nazis must be reduced starting out from working class neighborhoods, block by block. Schools and workplaces are also important battlefields. Victorious antifascism makes way for struggle against everyday misery, and increases the strength to defend that struggle not only from fascists but also from the police. The aim must be that it’s the fascists – not the people threatened by them – who must confine their activities within the limits set by officials.

In order to destroy the enemy’s forces and to preserve our own, it’s also necessary to make situational choices and prepare for quick changes. On Saturday 21st of October we set as our main enemy the fascists, as the secondary enemy the police, and as the third enemy the liberalism which hinders struggle. Bring with you slogans agitating antifascist struggle and join with us into a tight bloc!

An advertisement picture of the nazi march communicates the Tampere city hall (Raatihuone) as their objective, which they’d wish to reach without resistance. We will frustrate that hope and prepare for nazi intrigues. The nazis want to destroy our forces and scatter our ranks by attacking the most militant and marginalized of our masses. They want us to kneel before our masters. We must get up and defeat the nazis in order to liberate ourselves and our class.

Let’s repel the nazi march with the superiority of the oppressed masses. Cast away illusions and prepare for struggle, that will make the NMR wish they had never stepped in Tampere and that will make the bourgeois wish they had never allowed the nazis here. Let’s not give nazis peace, let’s suppress their activities, smoke them out of their holes, and punish them without mercy.

Close ranks and destroy the fascists!