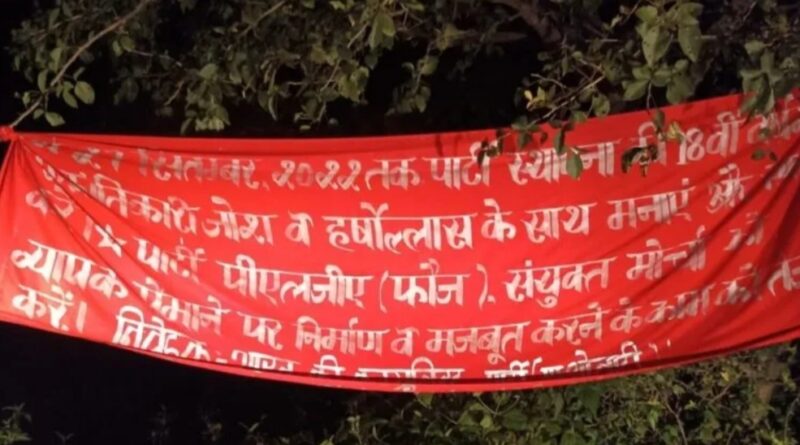 West Singhbhum District, September 16, 2022: The CPI (Maoist) carried out a poster campaign in about half-a-dozen villages in West Singhbhum district on Friday in anticipation of the party’s annual foundation week, set to begin on September 21.

The poster campaign has been carried out in the villages falling under the Goelkera and Chaibasa Mufassil areas of the district.

Maoist posters and banners were fixed in school buildings and Panchayat office buildings sometime on the intervening night of Friday. The police seized the Maoist propaganda materials and destroyed them as soon as the matter came to their notice in the morning.

The police have sounded an alert across the Kolhan division in view of the CPI (Maoist) foundation day week observance starting from September 21.

As part of the strategy, policemen have been asked to avoid routine movements. They have also been asked to strengthen the intelligence network along the borders with West Bengal and Odisha to assess the situation and avoid violent incidents.

Meanwhile, the police intensified the anti-Maoist operations in areas along the border with West Bengal. Sources informed that the high alert has been after intelligence reports that the ultras may indulge in violence in Seraikela-Kharsawan district.

Seraikela-Kharsawan has emerged as a hotbed of Maoist campaigns with the CPI (Maoist) increasing its activities. Sources informed that apart from wall painting and waging poster campaigns, the Maoists have made their presence felt to the security forces in the district.

Sources informed that there are intelligence inputs that the CPI (Maoist) may indulge in demonstrative acts of violence by targeting security forces and economic infrastructure such as trains, buses, railway stations, bus stations and other places.

” Our strategy is to maintain law and order and to ensure security of the people. This time all security forces have also been alerted to remain vigilant, particularly against IEDs and landmines,” said another official.

All the police stations in the three districts of the division including East and West Singhbhum and Seraikela-Kharsawan have been asked to beef up the security and keep a vigil at the bordering areas.

“A strict vigil would be kept on the non-government commercial establishments. Even the security would be beefed up at some of the naxal prone areas of Chowka,” said the official.

According to intelligence sources, the Maoists are trying to observe the foundation week by organizing small meetings at a number of places in West Singhbhum and adjoining Seraikela-Kharsawan district, and Chowka jungle is one of the probable venues for such meetings.