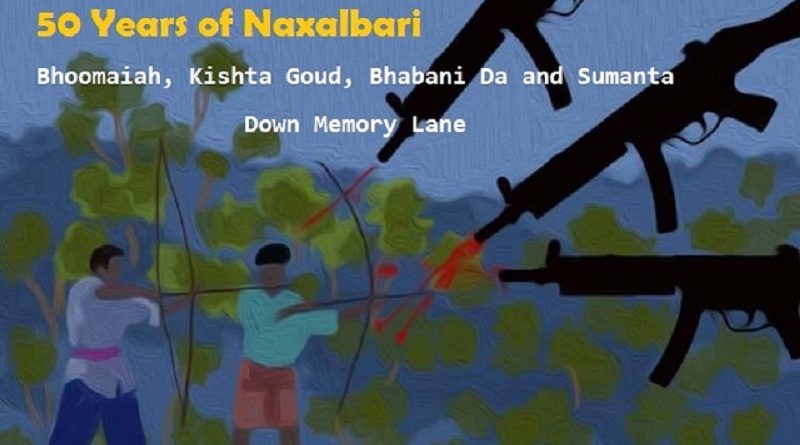 Sumanta Banerjeeʹs article ʹRemembering my old Comradesʹ (on the eve of ʹNaxalbari 50ʹ) took me also, to down memory lane. It connects me to my acquaintances with Com. Bhommaiah, Kishta Goud, Bhabani Da and of course Com. Sumanta himself.

Let me first write about the peasant revolutionary comrades Bhoomaiah and Kishta Goud. Com. Bhoomaiah was from Muthunuru Village of Peddapalli Taluq (now district, the place from where Kishanji and Vadkapuram Chandramouli also hail) of Karimnagar district on the river bank of Godavari. He comes from a ʹJangamaʹ – a non Brahmin priest community. Kishta Goud is from Kanargam village of Asifabad Taluq, Adilabad Dist. on the other side of Godavari river bank. Both are married. Bhoomaiah had children also. But most of their youthful life was spent in Telangana Armed Struggle (1946-51) till it was withdrawn.

It was as under trial prisoners in Secunderabad Conspiracy case during May 1974 – 1975, we six members of VIRASAM (RWA), Com. K.V. Ramana Reddy, Cherabanda Raju, M.T. Khan, T. Madhusudhan Rao, M. Ranganatham and myself used to meet Com. Bhoomaiah and Kishta Goud now and then on certain rare occasions though we were kept in a different barrack. During that period the Superintendent of jail Kurudulkar was a liberal democrat and very humanitarian. He was a friend of M.T. Khan outside because of his interest in theatre. He used to enact Vijay Tendulkarʹs Marathi dramas. Once he brought Vijay Tendulkar to meet us in jail, when he was in Hyderabad, in 1974.

It was on 30th June, we have first seen them. And I immediately wrote a poem describing them as revolutionary flutes made out of the bamboo branches of Adilabad forests.

ʹThe well built young man, head covered with deshelved curly hair and a welcome smileʹ must be Kishta Goud, and a ʹmiddle aged, short – statured bald personʹ is Bhoomaiah. Of course, it was Kishta Goud who used to smoke Charminar cigarettes.

The character, personality and mannerisms witch Sumanta mentioned about one person who first met him very aptly applies to Kishta Goud. It must be Kishta Goud who first called Sumanta at his cell.

On 25th December early morning hours before unlocking the cells and barracks, the news spread that in the wee hours of 26th December, Bhoomaiah and Kishta Goud will be hanged. By late morning it spread like wild fire to the democratic sections of the city also, and finally with efforts of APCLC and particularly itʹs then Secretary Pattipati Venkateswarlu, High Court Advocate, it was stayed.

The next day we again met them in their cells with the help of Superintendent and tried to have at least illustrations of them, but could not succeed.

We took Sri Sri to see them in the cells when he came to city to see us in jail. He as the President of APCLC (1973-75) campaigned vigorously throughout Andhra Pradesh against their hanging. His pamphlet and poem on them has become very popular. He compared them to the Earth (Bhoomaiah) and Sky (Kishta Goud).

It was again on 11th of May 1975, the government orders to hang Bhoomaiah and Kishta Goud were issued. All of us were on bail outside. Com. Madhusudan Raj then a PDSU leader, (latter rose to become the Secretary of CPI (ML) State committee (CP-Phanibhagchi Group) and killed in a fake encounter in 1995, in Ashoknagar Hyderabad.) came to know about it on 10th evening, and informed K.G. Kannabiran, who was already working against the capital punishment.

K.G. Kannabiran has sent three young lawyers of his office to the vacation bench of AP High Court praying to stay the hanging. For the second time it was stayed by the vacation court consisting of Justice Chinnapu Reddy and Justice Gangadhara Rao.

Meanwhile the jail was filled with Railway workers during the famous militant Railway strike and also with the Naxalites from different parts of the state. Between May 1974 and their hanging on 1st December, 1975 Com. Bhoomaiah and Kishta Goud shared the company of some such revolutionary Comrades like I. Mallikarjun Sharma, Mukku Subba Reddy (State secretary, CPI (ML), COC) and of course Com. K.G. Satyamurthy who has influenced them and in turn was immensely influenced by them and wrote vivid memories in prose and poetry. Telugu literature is enriched with memories of Com. Bhoomaiah and Kishta Goud and their martyrdom.

In the second week of May, 1975 a committee to fight to save the lifes of Bhoomaiah and Kishta Goud was found. Whoever agrees only on this demand were welcome. George Fernandez, then MP has taken up the issue at all India level. Jayaprakash Narayan, Vajpayee and others also have responded. There was International response. Jean Paul Sartre, Noam Chomsky, Tariq Ali in Paris and many such other writers, intellectuals, human rights activists have responded. There were protests in front of Indian Embassy in Paris, London and several other places.

Alas! Then came the internal emergency in India on 25th June, 1975. The people who were building the movement against capital punishment and human rights activists from all over the country along with political opponents of Prime Minister Indira Gandhi were put in various jails in the country or had to go underground. 1,50,000 people were detained under MISA without grounds. All fundamental rights were denied to the detenues.

About 30 members of VIRASAM were detained in different jails of Andhra Pradesh. I was lodged in Central Prison, Warangal. Under these circumstances Comrades Bhoomaiah and Kishta Goud were hanged on 1st December, 1975. There was censorship on media.

It is only because of protocol that a news that Bhupesh Gupta, a Rajya Sabha Member has met President S. Radhakrishnan, praying for clemency for Bhoomaiah and Kishta Goud appeared in Indian Express. We could guess that something must have happened.

Correlated to it was Barla Yadagiri Raju, a Naxal leader who was also awarded death sentence by a sessions court in Warangal returned late night to Central Prison in Warangal from a Hyderabad court raising slogans paying tributes to Bhoomaiah and Kishta Goud.

In the same month some of the VIRASAM members could meet in Secunderabad jail sending writ petitions to High Court for their release. The two things we have heard here from the comrades lodged here were about the hanging of Bhoomaiah and Kishta Goud, and one Sumanta Banerjee was arrested in Hyderabad and put in cells along with them before they were hanged.

Thatʹs how I have heard Sumanta Banerjeeʹs name for the first time. After the Emergency C.V. Subba Rao, member of VIRASAM and also closely associated with SRIJANA who was also a detenue during the emergency in Visakhapatnam jail got a job in Delhi and shifted. He was a live connection to us with writers, human rights activists and such other several people not only from Delhi but from different parts of the country. By the time we invited Sumanta Benarjee to Warangal to deliver Bhoomaiah and Kishta Goud memorial lecture on Capital punishment we have heard a lot about him, his creative and intellectual capacities and his varied interests.

After the emergency, with initiative of Shatrughna who along with his wife Veena Shatrughna was a detenue during the emergency we formed Bhoomaiah and Kishta Goud Memorial Committee to conduct lectures on human rights issues including abolition of Capital Punishment. K.G. Kannabiran, Pathipati Venkateswarlu were other important members. I was its convener.

We started the series of lectures from December 1980 and could continue till 1985. Sumanta Benarjee (Warangal-1980), George Fernandez (Guntur-1981), R. Mukherjee (Visakhapatnam-1982), Nikhil Chakravartee (Hyderabad-1983), K. Balgopal (Tirupati – 1984) gave lectures on different human rights aspects. Prof. Manoranjan Mohanty who was to deliver the memorial lecture in April 1985 in Vijayawada was arrested along with Gaddar, Eknath Salve and Prof. Murali Manohar in Indravelli on 20th April. Later the government has withdrawn the case. We have published Sumantaʹs lecture on capital punishment in 1980 in English itself.

So one can say that Sumanta Banerjee is Bhoomaiah and Kishta Goudʹs connection to Telugu society since 1975. Later of course when his ʹIn the Wake of Naxalbariʹ came in Telugu in 1982 he has become a household name for all those who cherished the Naxalbari movement or heard about it.

It was in 1985 I met Bhabani Da in Calcutta in Debbrath Pandaʹs house near Vidyasagar College. Debbrath Panda was one of the founders of All India League for Revolutionary Culture formed in 1983 in Delhi. The efforts were started in 1980-81 itself and Debbrath Panda was associated with this effort.

From 1985 July AILRC has taken an all India tour to bring to the notice to the people of the country about the state repression in Andhra Pradesh state including encounter killings.

We toured in Calcutta and Bengal. In this campaign Bhabani Da also has actively participated with Panda in Calcutta city. He was very elderly with warmth and concern and with deep political insight.

Later several times I met him in Pandaʹs place whenever I visited Calcutta. After his demise when I met Panda at Dum Dum in Calcutta he was not happy, that Bhabani Da was not paid deserving tributes for his services to the revolutionary movement.

It was in 1985 Sumanta has also met me in Calcutta and has taken me to Calcutta and Jadhavpur Universities showing the places of pitched battles between the revolutionary students and para military forces during Naxalbari times. I think he was writing the book on 19th Century Bengal Culture under colonial rule. The whole day we were roaming in Calcatta city by walk. He was showing me the historical places of Naxalbari movement in the early 70ʹs, with almost eye witness vivid details.

Whenever I speak about the state violence during the Siddharth Shankar Rayʹs period in Bengal I certainly mentioned about this experiences with Sumanta.

I met Sumanta in Delhi, Jama e Milia University, Tehelka summit (two day seminar) on ʹTwo Indias, One Futureʹ in November 2006. The session on Naxalite movement presided over by him. KPS Gil, Naveen Jindal, Dilip Simon were other participants.

It was a pleasant meeting in 2011 in Delhi again at the 30 years of formation of PUDRʹs meeting. The organizers have asked Sumanta to speak on Gobind Mukhoti, Urvasi Bhutalia on Sudesh Vaid and me on C.V. Subba Rao. This 30 years of PUDR was conducted as Dr. Ramanadham Memorial lecture which PUDR conducted every year. PUDR was formed in 1981, coming out of PUCL & DR. Gobind Mukhoti was its first President, and other two along with Sumanta and others were its founder members. Gobind Mukhoti was a Supreme Court lawyer. He challenged the declaration of Sircilla and Jagityal as Disturbed Areas in 1978 in Supreme Court and later he came to Warangal to inaugurate the APCLC state conference where K.G. Kannabiran in place of Sri Sri was elected as President and Dr. Ramanadham as one of Vice Presidents.

I have seen Sudesh Vaid first time in 1978 itself, when she came in a team of PUDR to go for a fact finding along with APCLC to enquire into the state repression in Jagityal and Sircilla declaring them as Disturbed Areas in October 1978. Along with C.V. Subba Rao, Sudesh and Gobind Mukhoti also have become a close friends of me.

I met Sumanta in Hyderabad last when he has come to deliver Com. Pyla Vasudeva Rao memorial lecture in 2012 or 2013.

Sorry, Sumanta, I know that now you are living in Hyderabad, for a long time, but I could not meet you. Whatever may be the reason I canʹt excuse myself for this lethargy. Whenever I read such articles by you, I get a vivid and lively picture of you, both physical and emotional. May be itʹs because of Naxalbari.