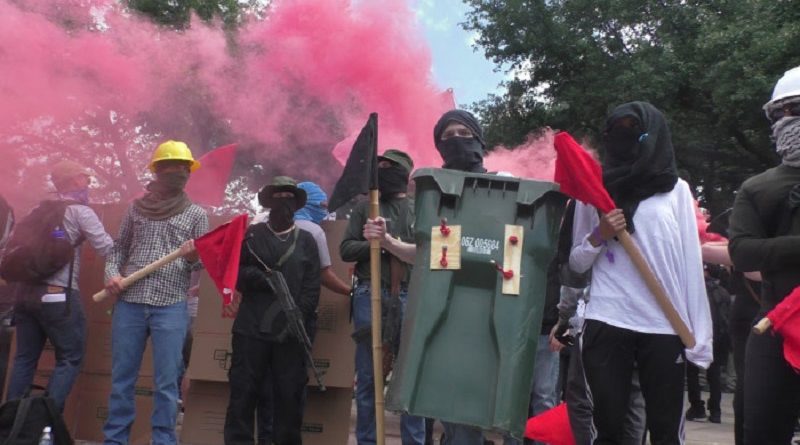 A sloppy xenophobic hate group named ACT for America attempted to have a “March Against Sharia Law” today in Austin Texas as a part of a lager national protest. What unfolded was a miserable failure for these reactionary bigots – we would settle for nothing less.

A woman who goes by “Lauren Morris” was the apparent shot caller of the “March Against Sharia Law” protest. When interviewed she was forced to admit that the anti-fascists prevented her group from marching and giving their prepared speeches. This middle-aged white woman claims that her reasoning for amassing such a despicable group of 4chan nerds, confederates, and neo-Nazis is that she has been a victim of “female genital mutilation” by a doctor she believes was practicing sharia law on her. There is no need to point out how utterly ridiculous such a claim is. 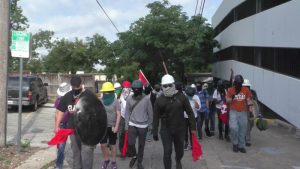 The fascists stayed huddled up on the capitol’s sidewalk steps in the shade, pinned to a fence and surrounded by anti- fascists and other counter protesters who greatly outnumbered them and surrounded them on all corners for four hours. The pig’s strategy seemed to be to push the anti-fascists into to the sun in hopes of tiring us out in order to let the fascists protesters have their little march around downtown but we were not going down without a fight. There was a air of amateurishness within the ranks of the 200 something DPS riot cops today as many of them appeared to be visibly shaken and breaking discipline quite frequently. Perhaps there was a mass recruitment of DPS officers recently or maybe it was time for the rookies to try their training in the streets. There were points where we could see DPS officers breaking their line to in fact step away from the aggressing anti-fascist. They in turn had to be physically forced back into line by the head pig in charge. At one point, in an attempt to beat and arrest antifascist protesters, the riot cops charged into the crowd full force attacking and pushing people back, forcing people with families and small children to leave the area. 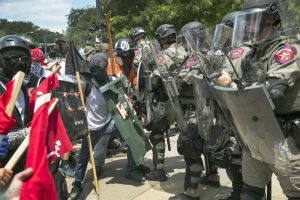 What the pigs were met with instead was a vicious fight back in which several pigs were hit on their helmets and in their faces. Homemade shields and sticks were used to meet their aggression and in the end antifascists managed to make two de-arrests and no one was taken into custody though the pigs tried their best to do so. You could see them frantically pointing out people who they claimed stuck them with sticks in an attempt to have the brave comrades arrested but they were not able to arrest a single person. It would appear that they were not prepared for the level of defense and coordination that antifascists went into this counter demo with. We maintain that it is our goal to grow in numbers and strength and that DPS and fellow pigs will never get away with assaulting us that easily. We encourage all to resist being kidnapped by the enemy and to fight back when you are attacked. Street battles like these are important concerts for our class, these kinds of conflicts train and prepare militants for future actions. 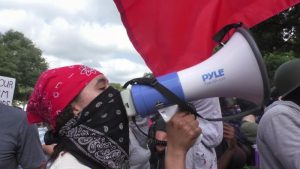 While there were many brave fighters on the frontlines of the police aggression we did not neglect the task of spreading anti-fascist literature and winning the support of many attendees and passersby, passing out pamphlets that explained what an antifascist is and the necessity of antifascism. We see popularizing antifascism as a key part of moving forward, no less important than militarization. There were multiple occasions where random tourists and people walking by stopped to thank antifascists for holding it down against ACT for America and in many cases some people hung out for a few minutes and joined in with antifascist chants. We had people of all stripes who found themselves showing support for the communists and anarchists who were drowning out the chants of the reactionaries.

After the police escalated violence against the antifascists many families with small children were forced to leave because of the dangerous situation the pigs had created. This did in fact decrease numbers. At some point it’s arguable that we were possibly out-numbered by the fascists towards the end of the protest; however this did not prevent us from holding ground. This was a testament to our endurance and confidence—our side simply fought harder and worked harder for the win. In the end the fascists walked away from their place on the fence demoralized and beaten and as each one filed out we took their spot further humiliating them, waving red flags and giving them an Austin antifascist goodbye. Soon after the DPS pigs filed out by the dozens leaving just APD to deal with the ensuing victory march! The fascists were not allowed to march in our streets whether or not they got permits. We on the other hand will continue to march when we want and where we want because we are the proletariat. Communists, anarchists, and other anti-fascists marched the very route that the fascist so desperately wanted to take. APD had a hell of a time trying to coral us as we jumped on top of their road blocks and took the streets. Simply put, it was a victory. The ragtag groups of reactionaries were sent packing and smaller groups of them were stalked through downtown on foot and in cars- some expressing concerns of getting jumped by anti-fascists. The heavy police presence prevented them from meeting prompt street justice but we suspect this will not always be the case. Many of them looked scared and confused and to them we say: never forget that feeling because it only gets worse from here for you if you continue to try to organize in our city. 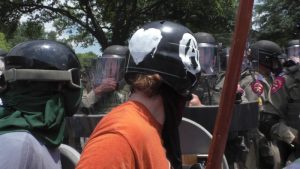 While the fascists once again imported into our city, comrades throughout Texas brought crucial energy to the event, to them we owe our most sincere gratitude. Red salute to the Revolutionary Association of Houston–not only was their presence on the streets of great assistance to us but we are also delighted to see the spread of Maoism outside of Austin. We hope that Houston and Austin become sister cities and future bastions of red power. As always much love to our neighbors the Revolutionary Front San Marcos who have been locked in antifascist struggles of their own. Thanks to every local activist and antifascist and all who came to town to help us in this victory. Tactical alliances were of great importance and some serious differences were temporarily set aside so that the day would go to the antifascists. We commend all who fought alongside of us today.

Our objectives were simple: defend the people of Austin, deny the anti-Muslim bigots their ability to give speeches, and block any ability they would have to march in our beloved city. All three of these objectives were met. More important than single victories or defeats is persistence, adaptability, courage in battle and constant vigilance.

Drown fascism in a sea of resistance!