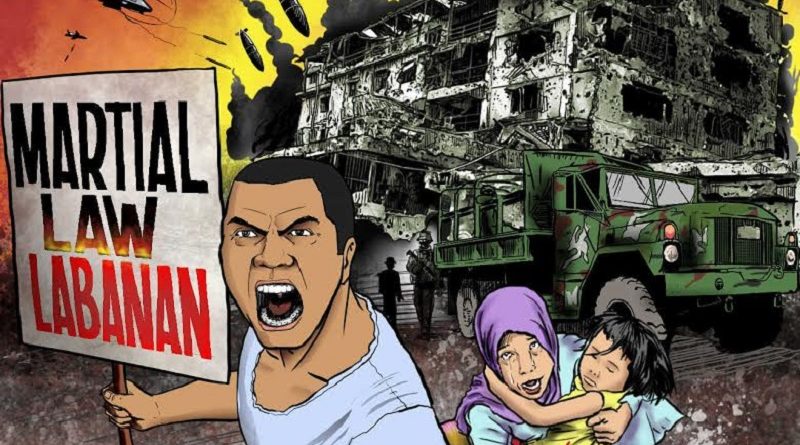 The entire revolutionary movement strongly condemns the imposition of martial law and the suspension of the writ of habeas corpus in Mindanao by GRP President Duterte. This has no justification. That martial law in Mindanao was imposed because of claims of rebellion and terrorism of the so-called Maute Group in Marawi City is unacceptable.

Duterte’s declaration must be denounced because it gives the AFP and PNP unrestrained freedom to abuse their powers against the people. Duterte has even openly encouraged the soldiers to carry out abuses when he said he will answer for them.

Even before martial law was imposed, soldiers and police have been relentlessly abusing human rights and trampling on the people’s welfare under the Duterte-Lorenzana all-out war declaration of last February against the NPA. By imposing martial law and suspending the writ of habeas corpus in Mindanao, the military and police have become even more ruthless in using their armed power to carry out horrific repression, violence, crime and corruption.

With martial law powers, the AFP and PNP are suppressing the people’s civil-democratic rights in setting up checkpoints all over and warrantless searches and arrests. Everyone is a suspect whose inno­cence must be proven. They directly intervene in conflicts between capitalists and workers and defend the interests of the former. They claim even the power to censor anyone who goes against their reasoning.

When martial law was declared, the AFP became more ruthless in waging brutal operations against people suspected of supporting the armed revolution because of their active defense of their welfare. Successive aerial bombardment and strafing were carried out in Davao del Sur, Bukidnon, North Cotabato and Compostela Valley which are quite a distance from the said rebellion of the Mautes. Military officials themselves said “martial law or not”, they will continue to wage operations in civilian communities which they suspect to be NPA territories.

Any plan to impose martial law nationwide must be firmly resisted. The people will determinedly oppose Duterte if he will attempt to install himself a dictator, close down civilian institutions, completely deny formal civil rights and establish open state fascist and terrorist rule.

By supporting all-out war, imposing Mindanao martial law and giving the military full powers, Duterte’s claims of being a Leftist, socialist and pro-masses erode. He is in danger of being isolated from the Filipino people. In Mindanao, soldiers and police carry Duterte’s name as they occupy civilian communities, searches, arrests, taunting and repressing the workers and peasants struggling to defend their rights and welfare. In complying with the order to “flatten the hills”, the AFP sticks his name on every bomb dropped which causes widespread destruction on the people’s livelihood and environment and brings about intense fear among the people.

The AFP’s all-out war is poisoning the atmosphere in the NDFP-GRP peace negotiations. This jeopardizes the talks especially with Duterte’s demand for the NPA to declare a ceasefire before proceeding with talks and agreements on substantive socio-economic and political issues.

Duterte is giving more powers to the military. He has given more weight to his threats against the courts and other government agencies. Congress has become a mere ornament when it refused to subject Duterte’s martial law declaration to scrutiny. In the name of the “war against terror” that is now being linked to the “war against drugs”, Duterte is using and brandishing military power in the entire Mindanao.

Under this, the AFP has carried out its more than half month all-out war that has resulted in widespread destruction of Marawi City and disaster on the lives and livelihood of more than 200,000 people. Despite the people’s pleas, the aerial bombardment by AFP helicopters and warplanes have been ruthless against homes, buildings, roads and other civil infrastructure. Almost every resident has left. Just as in the widespread destruction of Zamboanga City in 2013, the destruction of Marawi City is expected to open large infrastructure projects. The echoes of bombs have yet to die down, and the big bourgeois compradors have already started to drool and encircle Marawi.

What started out as an offensive by the Duterte regime against the Maute Group is now rousing anger among Moro leaders because of the relentless destruction of the lives of Marawi’s people. Almost all (98%) of the people of Marawi are Moros. If the complete destruction of Marawi continues, the war launched to “suppress terrorism” will be regarded by the Moro people as a war against them.

In imposing martial law and not addressing the basic question of self-determination, the Duterte regime will fail to resolve the emergence of various armed Moro groups with different aims. Historically, revolutionary, progressive and anti-imperialist groups have emerged advancing the interest of the Bangsamoro. However, there are also those who espouse a war based on religion or those who have been reduced to criminal banditry. If the Duterte regime will not rein in the AFP’s bombardment, instead of suppressing the armed bandit groups, the ruthless and brutal war of the AFP will succeed in pushing more Moro people to take up arms and engage in war.

In unity with the Filipino and Moro people, the Party stands for the immediate end of martial law imposed by Duterte in Mindanao and for the restoration of the writ of habeas corpus. The Filipino and Moro people must also unite against all forms of terrorist attacks against civilians. While condemning armed groups which target and deliberately harm civilians, they must also strongly condemn the terrorism of the relentless war of destruction of the AFP against Marawi City.