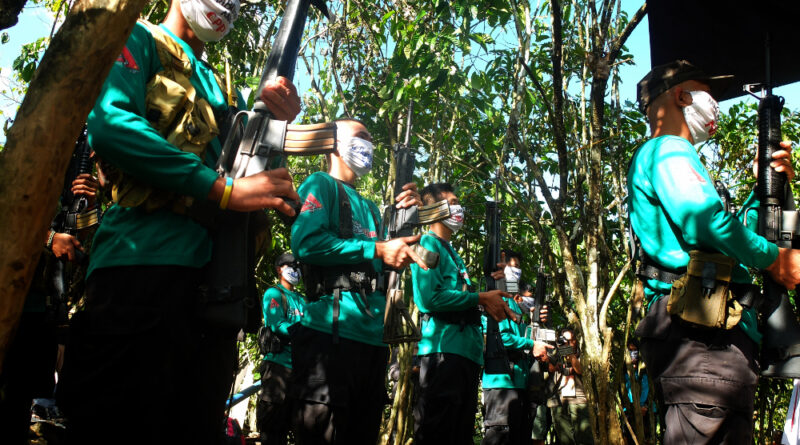 The Central Committee (CC) of the Communist Party of the Philippines (CPP) on Wednesday urged the New People’s Army (NPA) to strengthen its unity with the peasant masses as the key to frustrating and overcoming the regime’s war against the revolutionary movement. The CC said this in its 7,700-word statement entitled “Frustrate The Vicious Counterrevolutionary War Of The US-Duterte Fascist Regime,” on the occasion of the NPA’s 52nd anniversary last March 29.

The CC stressed that the NPA must defend peasant and minority communities who are being subjected to an “increasingly cruel” war for close to four years now. It pointed out that entire villages and communities are currently being placed under “military garrison and hamlet-style” rule which constitute “the dirtiest and most brutal tactics of suppression,” in a vain attempt to “cut the links between the NPA and its peasant mass base.”

Human rights records indicate that at least 22 massacres have been perpetrated by the regime. Majority of the victims (over 110) were farmers and indigenous people communities defending their right to their land. Most these happened in Negros and Bicol, both covered by Rodrigo Duterte’s Memorandum Order No. 32, and in Mindanao.

On top of these, farmers are also subjected to arbitrary searches and arrests, interrogation, food and economic blockades, and forcible “mass surrenders.” Entire communities are also subjected to retaliation and collective punishment after NPA tactical offensives, and relentless intimidation and psywar campaigns. The most recent cases include the military’s bombing spree in Mansalay and Roxas, Oriental Mindoro from March 25 to 26, and in Ozamis City on March 6; and the killing of 17-year old student Aldren Faburada by 79th IB in Negros Oriental on March 15. These aforementioned attacks were all perpetrated by various military units after suffering defeats in successive NPA offensives.

The Party pointed out that the the AFP is currently mounting an all-out nationwide offensive mobilizing close to 150 battalions of AFP and PNP combat forces in a desperate to attempt to meet its rescheduled target to decimate the NPA before the end of Duterte’s term. The regime’s large-scale military offensives called “focused military operations” (FMO), primarily affect peasant communities in the countryside.

These offensives involve both combat and psywar operations, and cover several towns and scores of villages in inter-town or interprovincial border areas. Hundreds of ground troops are deployed in FMO areas who typically occupy civilian communities for months to overwhelm and terrorize the people.

These are usually supported by drone surveillance and the use of aerial bombardment and strafing, as well as light and heavy artillery shelling, in utter disregard of the safety of civilians residing in nearby communities. Farmers are also forcibly recruited by the AFP into the CAFGU to meet its target to recruit at least 9,000 more paramilitary forces.

In the face of these attacks, the Party reminded the NPA to endeavor to unite with the peasant masses and “fight tooth and nail against the enemy’s attacks and the occupation or garrisoning of villages.” The Party emphasized that the NPA must “untiringly and creatively conduct political work among the masses” to raise their determination to resist the regime’s suppression campaign. It also urged both the NPA and farmers to “denounce and oppose” the presence of abusive military and police troops, and to actively expose them in the media and social media.

In particular, the CPP instructed the NPA to continuously build and strengthen local Party branches, revolutionary mass organizations and village militias. It tasked the NPA to ensure that revolutionary propaganda, education, campaigns and anti-feudal struggles are “carried out interminably” even in the presence of military forces in the villages. It ordered the NPA to heighten the recruitment of Red fighters from the peasant mass bases. To help strengthen local guerrilla units, the Party encouraged all militias to have a three- or six-month tour of duty.

The Party noted that the NPA units have successfully expanded to new territories or recovered old areas, even in areas under the enemy’s priority. It recognized the NPA’s efforts to widen the area of operations of guerrilla fronts and to build new guerrilla fronts. It explained that this enables NPA units to “widen their area of maneuver, force the regime to further spread its forces thin and make enemy encirclement operations more difficult and costly.”

The Party stressed the significance of waging agrarian revolution in advancing the protracted people’s war. It reminded the NPA of its task to arouse, organize and mobilize the peasant masses in mass struggles and campaigns for rent reduction, lowering interest rates on loans, increasing wages of agricultural and farm workers, raising farm gate prices, lowering rentals on farm equipment, setting up cooperatives and mutual help groups to increase production and income from sideline occupation.

It reminded the NPA to combine all these efforts in mass base building and agrarian revolution to further heighten the armed struggle, and overthrow the oppressors and exploiters.