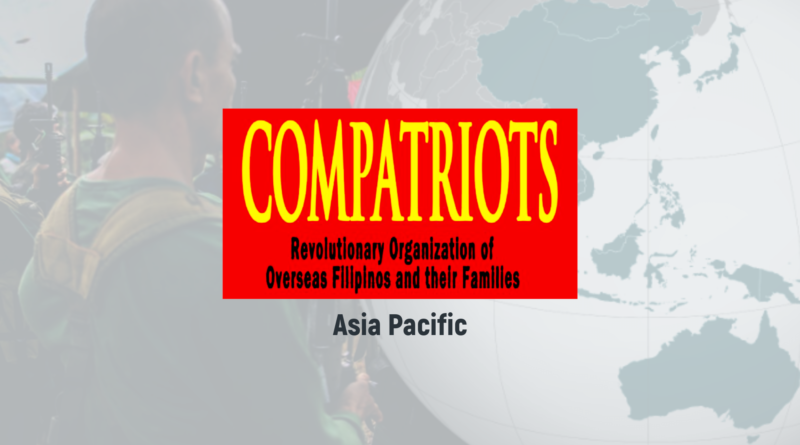 COMPATRIOTS-Asia Pacific, a revolutionary organization of overseas Filipinos in the Asia and Pacific region affiliated with the National Democratic Front of the Philippines (NDFP), gives a militant red salute to the New People’s Army on its 52nd year.

We give our highest tribute to fallen Red fighters who gave the ultimate sacrifice to advance the people’s war. For us who are often called “new heroes”, they are truly the people’s heroes.

In these trying times when the reactionary state desperately attacks all without distinction between those armed and unarmed, the people’s army serves as the people’s shield and weapon against this fascist state. The glorious history of the NPA that started small but steadily grew and strengthened nationwide amidst failed counterinsurgency plans of successive regimes from Marcos to Duterte, is a testament of the support of the masses to the NPA.

The chronic crisis of the semi-colonial and semi-feudal Philippines grows worse as the scourge of imperialism, feudalism and bureaucrat capitalism continue to push our people into poverty, exploitation and oppression. More and more, the fundamental problems of the Philippine society are revealed to the people. The root causes of our miseries that eventually force millions to desperately seek survival overseas despite hardships and extreme risks are exposed and the need for revolutionary change becomes more urgent and necessary.

This has become more obvious under the COVID-19 pandemic.

The puppet, corrupt and murderous Duterte regime has repeatedly thrown in futile band-aid attempts to cover its miserable failure to address the spread of COVID-19 and its impacts to our people. Despite borrowing trillions of pesos that put the Philippines deeper into debt, Duterte still has nothing to show but increasing cases of infection, hospitals reaching critical capacity, health services that the poor cannot access, skyrocketing cost of food and goods, and large-scale unemployment and loss of livelihood across sectors. It even now has to rely on donations of vaccines which it could not even manage well.

The Duterte regime’s feeble attempt to appear on top of the COVID-19 crisis through militaristic methods mirrors its fruitless campaign to finish off the revolutionary movement. Its repressive measures as response to the pandemic, as well as its rampage against legal and unarmed activists including the insidious Anti-Terrorism Law, both point to its desperation to control the people who grow more restive and are showing defiance in so many ways.

Even overseas, the failed “ayuda” (aid) and response to Filipinos affected by Covid-19 pandemic and the mad-dog like antics of the NTF-ELCAC are also felt. Lack of assistance and support for Filipino migrants to cope with the crisis remains as the Duterte government also tries to extort more funds from overseas Filipinos resupply the public coffers it bled dry with massive and widespread corruption. At the same time, NTF-ELCAC and their paid stooges abroad unleash red-tagging among progressive Filipino groups and solidarity allies.

But overseas, Filipinos are fighting back by exposing the real issues at hand – poverty, gross neglect, corruption in the OWWA and Philhealth, state exaction and criminal neglect. They use all possible ways to expose the syndicates running the country and do not let restrictions dampen their desire to do mass actions in-person or through social media and internet technology.

Indeed, the Duterte regime has a lot to be scared of. The Filipino people know that he is paving the way to perpetuate his power beyond 2022 to avoid being meted out with justice for his criminal acts especially the widespread extrajudicial killings. Duterte continuously feeds his mercenary dogs in the military with funds and positions to maintain his position or eventually put his anointed successor.

However, the Filipino people are fighting back. Everywhere, the discontent is palpable and it is not remote for the tide of protests to end the term of an imbecile of a president even before it can scheme to extend his presidency. Ending Duterte’s and his syndicate’s reign is a sentiment spreading like wildfire and the people should unite to deliver a death blow to these cabal of criminals.

COMPATRIOTS Asia-Pacific is one with our people in ousting Duterte and uniting with democratic forces to ensure the defeat of nefarious attempts to perpetuate this fascist dictatorial regime.

We also vow to further advance the national democratic revolution with a socialist perspective that will pave the way for an all-out change in the economic, political, and socio-cultural structures in the Philippines. It is the program of the national democratic revolution that will deliver the basic rights of the people that will ultimately solve the plague of forced migration and labor export to millions of Filipinos.

To advance the people’s democratic revolution, the most glorious of the fight is waged in the countrysides by the New People’s Army. The increasing strength of the people’s war through the people’s army shakes the rotten Philippine system to its core and has made the Filipino people’s revolution a shining torchbearer of the international proletarian revolution.

For us in the COMPATRIOTS and for the Filipino people, the NPA gives us the courage and the will to struggle and bring the national democratic revolution to victory. The NPA’s growth and advance is an inspiration for all revolutionary forces to continuously advance the two-stage revolution under the leadership of the Communist Party of the Philippines, cherish and support the NPA, and more importantly, join the armed struggle. We in the COMPATRIOTS know that it is through the people’s war that the Filipino people will finally be free and usher in our genuine reunification with our families back home to build a society that is truly just, peaceful and prosperous.