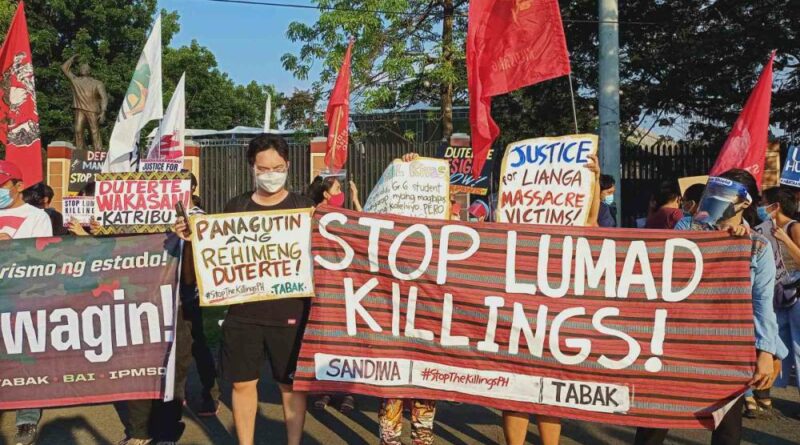 The Armed Forces of the Philippines (AFP) is weaving lies to cover up the murder of three civilians in Surigao del Sur province by its fascist armed troops last Tuesday.

On June 15 at around 1 p.m., local civilians Willy Rodriguez, Lenie Rivas and 12-year old Angel Rivas were mowed down by gunfire by armed troops of the AFP’s 3rd Special Forces Battalion and 48th IB at Sitio Manluy-a, Km. 18, Barangay Diatagon, Lianga, Surigao del Sur. According to their families, their bodies were mangled, and Angel’s face was beyond recognition. She was believed to have been raped. Her genitals were torn.

Willy, Lenie and Angel were part of a group of abaca strippers who took a break from work and were about to get some snacks from a nearby store when they were fired upon indiscriminately by the 3rd SFB troops. To justify their crime, the AFP soldiers claimed the three were killed in a firefight with the NPA. They even concocted stories of recovered firearms and explosives.

Relatives of the victims and local residents attest to the fact that the three were their neighbors. Angel was a student at the local community school. The adults were both members of Mapasu, a lumad community organization opposed to mining operations in their ancestral lands, which the AFP has maliciously red-tagged as an “NPA front.” Angel was enrolled in the DepEd alternative learning system and was trying to earn fare money to bring her requirements to school.

The AFP is promoting the lie that the three were NPA fighters in a vain attempt to cover up their crimes. This lie is being propagated by top officers of the 4th ID and other higher military officers. In doing so, they are, in fact, promoting and abetting their men for committing crimes and grave violations of international humanitarian law.

Military officers have been repeatedly weaving the lie of “encounter with the NPA” in the same way that the police have used the false “nanlaban” story to cover up their killings of unarmed people. Just a week ago, the PNP and AFP made the same claim to make it appear that civilians Antonio Poligrates, Ailyn Bulalacao and Ramon Brioso, who were abducted and killed by police, were members of the NPA.

Crimes of murder, torture and rape, have long been part of the arsenal of the AFP in their dirty war against the people, particularly against the peasant masses and minority people, who have been fighting for their rights against land grabbing. People are being subjected to these crimes to make them submit to the power of the fascist soldiers and police.

All democratic forces must demand a stop to these crimes and lies. We urge all victims of military and police killings falsely accused of being NPA fighters, or their relatives and friends, to expose the lies and demand justice.