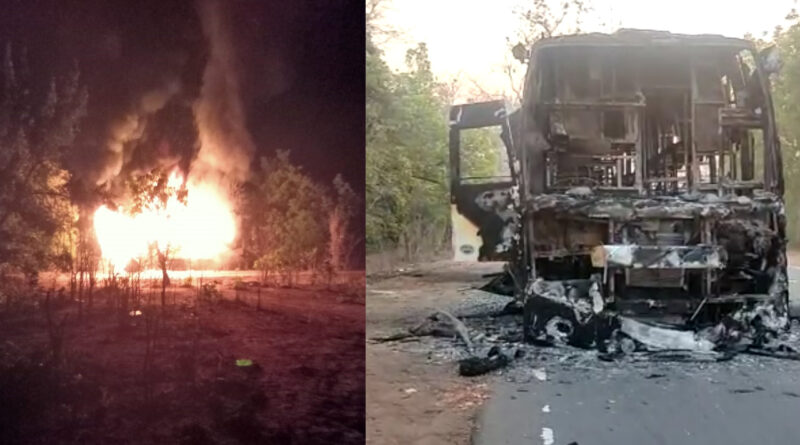 Alluri Sitharama Raju District, April 25, 2022: A squad of cadres belonging to the Konta Area Committee of the CPI (Maoist) set fire to a private bus after asking all 40 passengers to alight from the bus on the National Highway near Sarivela in Chintoor agency area of Alluri Sitharama Raju district.

The incident occurred late on Sunday night close to the Andhra-Chhattisgarh border area. One woman, aged around 50 years from Jeypore, Odisha, was reportedly hurt in the incident and sustained minor burn injuries.

The bus service was heading from Jeypore of Odisha to Hyderabad via Chintoor agency area. The Maoists have reportedly chosen the isolated Sarivela-Kothuru area, which is just 3km away from Chintoor police headquarters.

The Sarivela-Kothuru block is one of the most strategic locations for the Maoists operating from the Dandakaranya area, as it is barely 2.8km from Chhattisgarh and about 7km from the core bases of the Maoist strongholds in Chhattisgarh, said Superintendent of Police ASR District J. Satish Kumar.

Chintoor ASP G. Krishnakanth told The Hindu: “The incident had occurred around midnight of Sunday. It is believed to be carried out by the members of the Konta Area Committee operating in the Dandakaranya Zone. All the passengers are safe and there is no casualty and investigation is on.”

Further Mr. Satish added that it was common for the Maoists to cross the border and commit offenses on the Andhra side. This they have been doing ever since, the Maoist presence having dwindled on the Andhra side. On being alerted of the incident, the police rushed to the spot and arranged alternative arrangements for the passengers to reach their destination.

The Maoists also left behind posters at the site, condemning the arrest and death of 62-year-old Uppuganti Nirmala (Narmada Didi). On April 9, Ms. Nirmala, In-Charge of the Maoist party’s West Sub Zonal Committee (Dandakaranya), had died in a jail in Maharashtra.

Justifying their action, Comrade Mangli the spokesperson of North Sub Zonal Committee of the CPI (Maoist) (Dandakaranya), stated in a release that in 2019, Maharashtra police had arrested Ms. Nirmala from a hospital in Hyderabad and did not provide her medical treatment till her death. The same was the case of many Maoists who are lodged in different jails.