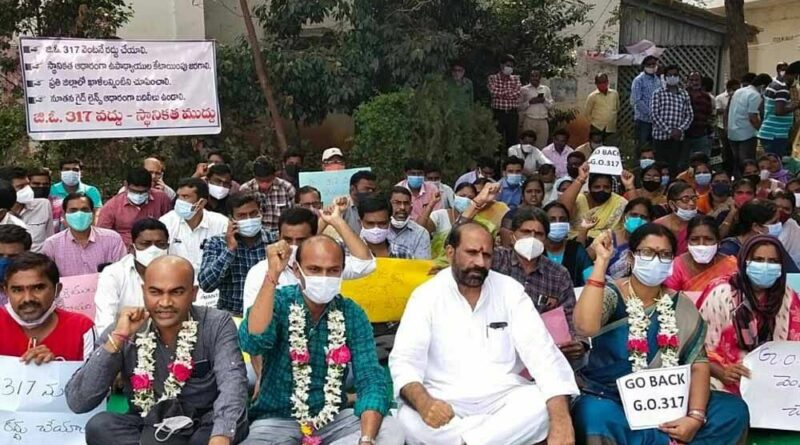 Mulugu District, January 4, 2022: Protests have been taking place in Telangana state, demanding that the state government revoke Government Order (GO) 317 which was introduced on December 6, 2021. The GO, pertaining to Telangana Public Employment, has introduced a zonal system in the allocation of jobs. The new system was formulated after Telangana was reorganized into 31 new districts from 10 in 2016; and new districts like Asifabad, Bhupalapally, Mancherial, etc. were created.

As per the GO, the District Collector and the concerned Head of the Department in that district will be part of the allotment committee deciding on jobs and transfers for the district cadre posts. For zonal and multizonal posts, the decision will rest with the Principal Secretary, Special Chief Secretary, Head of the Department, and Senior Consultant to the government.

The agitating employees are objecting to the GO, stating that the government took the decision unanimously without consulting them. According to them, the GO does not consider the nativity of the employees and allocating permanent posts and transferring them to other districts. Further, protesters alleged that there are discrepancies in the preparation of the allocation list. They claim that seniority was given priority in the allotment to districts, but the seniority list is riddled with errors – a few government teachers, for instance, who have contacts of higher-ups were securing postings in cities and towns, they said. Meanwhile, others were being forced to move to remote areas in permanent allocation despite higher seniority and despite not being natives of the new locations.

As the protests against the GO 317 gather momentum in the State, the CPI (Maoist) has extended it’s support to the employees’ demand. The letter released by the CPI (Maoist) Central Committee spokesperson, Comrade Jagan, at Venkatapuram on Monday demanded the TRS government to withdraw the GO and stop the employee allocation with immediate effect.

The Maoists demanded that the government take up recruitment on the basis of nativity and reservations. With the government taking up the allocation of employees on the basis of seniority, a whole lot of employees especially women were put to distress. The GO is also likely to affect the unemployed youth especially the Adivasis, the letter said. Instead of implementing such thoughtless GOs, the government should focus on taking up recruitment, the Maoists said. The Maoists further stated that the TRS government had intentionally issued the GO 317 to distress the employees.

The letter questioned the rationale behind forcing the GO although nearly 3 lakh employees have been up against it. The Maoist party criticized the government for not taking the opinion of the employees into consideration before rolling out the GO. The letter also urged people to support the employees’ protests until the government withdraws the GO.