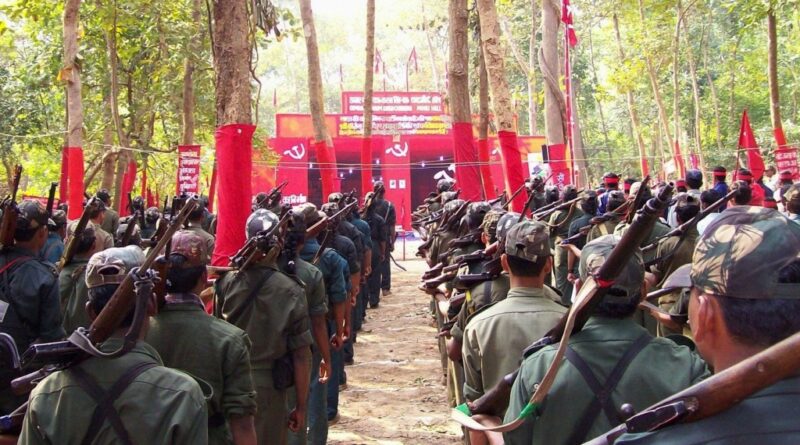 An appeal to the Revolutionary friends, Leftists, Progressive Democratic Intellectuals, Nationalists and Patriots.

They have understood that they cannot come out of the swamp of crisis without setting aside this ‘Hurdle’. Hence, in 2005 itself they declared that Left Wing Extremism (that is our Party) is thesinglelargestthreatto the Internal Security of our country.

You all have seen how AFSPA have destroyed lives in Kashmir and the North East. Very soon the iron heels of the Indian Army is going to mercilessly trample upon the people of the areas of our movement in Central and Eastern India. This should not be acceptable to any Indian citizen on any condition. This would be purely unconstitutional.

We appeal to you all to strongly oppose this develop a moment on the demand for calling the Indian Army Since the Indian government declared the Left wing Extremism (that is our Party) as the singlelargest threat to the Internal security of our country it has resulted in continuous and prolonged repression campaigns against our Party, the revolutionary movement and the revolutionary masses.

You all are well aware that between 2005 and 2009, under the aegis of state and Central governments, how the white militia, Salwa Judum and Sendra, were organised and unleashed on the masses and an environment of terror was created in the areas of the movement. Then too we were united in defeating their attempts. Later, from mid 2009 theenemy started an undeclared-Operation Green Hunt, with the intent to repress our all India movement. When this too was challenged by us then in mid 2017 the Indian State reviewed it and since May that year they are carrying out the multi pronged, fixed 5 year Operation SAMADHAN.

We are facing this for past threeandhalfyears. Now that the duration of SAMADHAN is about to end, the North Block is again restless. Consequently, since Dec 2019, they brought in a new plan named ‘Prahaar’. As a part of this, since November 2020 the Prahaar is intensified. Under the leadership ofour Party, the revolutionary movement and the PLGA is giving them a fitting reply, but some actions such as nearMinapa village on March 21 2020, led by the PLGA,has made them really disterbed. As a result, with the aim of uprooting Indian revolutionary movement on October 15th 2020, National (Internal) Security Adviser, Vijay Kumar conducted a meeting of top Police Officials of five states, Paramilitary, State and Central Intelligence Agencies via video conference and declared a new decisive attack plan,to be implemented from November 2020 to June 2021, of 10 point tactics based on the lines of military operations.

Actually, before the declaration of this plan, the police have acknowledged the deaths of 4 Army jawans in the March 21st 2020, Minapa village ambush, carried out by the PLGA.Eventhough they participated in the campaign as DRG, it is clear that the Indian ruling classes are deploying Indian Army in disguise and carrying out its wars on the people of India.The Army that is supposed to fight foreign invaders are being stealthily disguised as DRG and put to war against the civilians of the country, that too on the indigenous inhabitants of this country.

We appeal you to strongly condemn this and develop a movement at several levels on the demand to call back the Army. Since 2014 we are facing deadly attacks by the ruling hindutva forces. We have already lost people’s well wishers like Gauri Lankesh and Govind Pansre. Presently a lot of friends are languishing in many of the jails of the countryeven at the time of Corona Pandemic.

They have neglected their own Supreme Court suggestions to release prisoners in the background of Corona, and denied bails to them. Actually they are all innocent people who have committed the only crime of opposing the dictatorial, blind religious and murderous policies of 2Brahminic Hindutva Fascists’ government. To finish the Indian revolutionary movement such conspiracies are carried out. The ruling Brahminic hindutva fascist are trying to stifle every voices of dissent and everyone who struggles. They have converted the whole country into a big Jail.

They are constantly conspiring to divert and divide the people’s movements and creating an environment of terror and amuck. Leftists and Democrats are perpetual enemiesof these Brahminic hindutva fascist. They have violated promises and rights enshrined in the constitution to the Kashmiris. They have trampled upon the aspirations of self-determination of the people of North East. They brought CAA on religious lines. They have brought the farm laws with the intent to smash the agricultural sector. In the name of New Education Policy they’re encouraging irrelevant hindutva policies. They are not tolerating any opposition to their neoliberal Brahminic hindutva fascist policies by the peasants, students and workers. They are trying their level best to divert such movements. They are attacking the left democratic leadership who are not willing to compromise. This needs to be countered with even more unity. Those neoliberal hindutva policies, their idea of new India needs to be opposed by creating strong people’s movements.