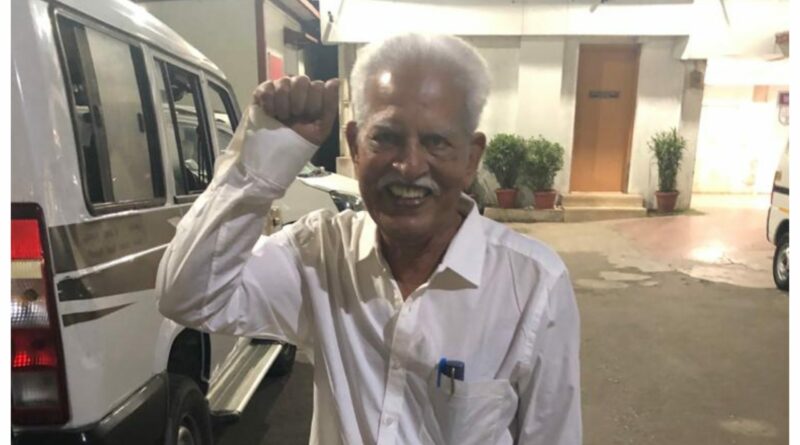 March 7, 2021: Poet and activist Varavara Rao, who is an accused in the Bhima Koregaon case, was released on Saturday from a hospital, reported NDTV. The Bombay High Court had on February 22 granted the 81-year-old activist bail on medical grounds for a period of six months.

He was undergoing treatment at Mumbai’s Nanavati Hospital, where he was admitted by the Maharashtra government following the High Court’s intervention. Rao’s lawyer Indira Jaising posted a photo of the activist, saying he was “free at last”.

Rao was granted bail on the condition that he has to stay within the jurisdiction of the Special National Investigation Agency Court. The court also asked the activist to mark his presence with the nearest police station through video call on messaging platform WhatsApp. Besides, Rao has been directed not to issue any statements or speak to the media.

The activist and poet was shifted to Nanavati Hospital, after the High Court on November 18 observed that he was “almost on his deathbed”. Since then, the court extended his stay in the hospital on December 15, December 21 and then on January 7. The National Investigation Agency has, however, maintained that he was fit to be shifted back to Taloja Jail, where he was lodged before being hospitalized.

Rao was arrested in 2018 along with several other activists and booked under the stringent Unlawful Activities Prevention Act. The poet and activist suffers from multiple ailments.