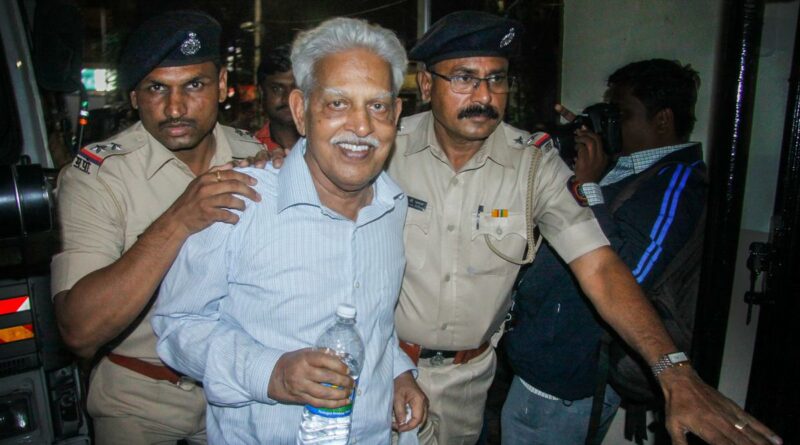 Mumbai, August 20, 2022: A special court here has directed Telugu poet and political prisoner Varavara Rao — an accused in the Elgar Parishad case who was recently granted bail on medical grounds by the Supreme Court — to reside in Mumbai and not leave the city without its permission.

It also restricted Rao from having a “gathering of visitors” at his residence in Mumbai, and asked him not to indulge in any “criminal activities, similar to the case against him or otherwise” and not to contact any co-accused in the case or any other person involved in similar activities.

The apex court had granted bail to Rao on August 10.

His bail conditions were set by the special court hearing cases related to the National Investigation Agency (NIA) recently, the details of which were made available on Saturday.

The bail conditions mandate Rao to reside within the area of greater Mumbai and not leave the city without prior permission of the NIA court.

He shall furnish the detailed address of his residence in greater Mumbai and his contact number, along with the numbers of his three close relatives and persons residing with him, the court said.

It directed the accused not to make any statement to media — be it print, electronic and social — regarding to the case.

He shall not commit any other offense either of similar or any other nature and not indulge in any activity regarding which present crime is registered against him, the court said.

Further, Rao has been directed not to contact or communicate with the co-accused or any other person involved in similar activities.

He shall not make any call either domestic or international to any person indulging in similar activities through any mode of communication, Rao’s bail condition reads.

The accused has been asked not to tamper the prosecution witnesses, either personally or through any other person.

He shall not abscond or try to flee away from justice. There shall not be any gathering of visitors where applicant shall reside at greater Mumbai, the court said.

The court has asked the accused to furnish a fresh bond of ₹50,000 with two solvent sureties in the like amount.

The case relates to alleged inflammatory speeches made at the Elgar Parishad conclave held in Pune on December 31, 2017, which the police claimed triggered violence the next day near the Koregaon-Bhima war memorial on the outskirts of the western Maharashtra city.

The Pune Police had also claimed the conclave was organized by people with alleged links to the CPI (Maoist). The National Investigation Agency (NIA) later took over the probe in the matter.

Rao was arrested on August 28, 2018 from his Hyderabad residence and is an under-trial in the case. An FIR was lodged by the Pune Police on January 8, 2018 under various sections of the Indian Penal Code and the Unlawful Activities (Prevention) Act.