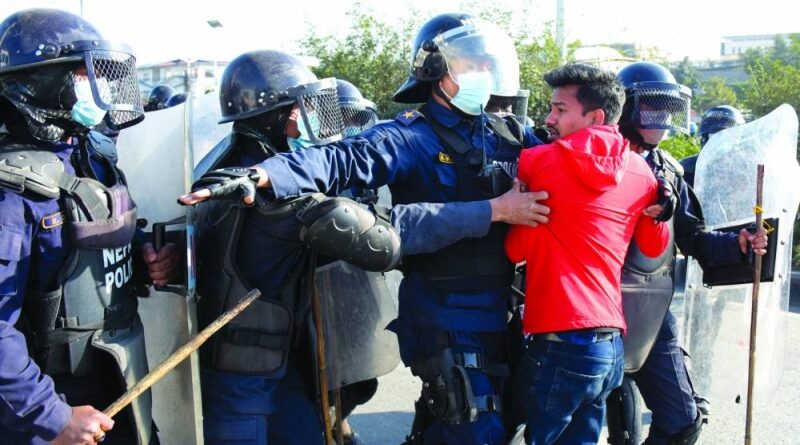 Kathmandu, December 14, 2021: Cadres of some Communist parties, including the Netra Bikram Chand-Led CPN, staged a demonstration outside the House of Representatives in Kathmandu today against the possible endorsement of the Millennium Challenge Corporation agreement backed by the United States.

Scores of people shouting slogans against the MCC tried to breach the security cordon as soon as the winter session that started from today commenced inside the Parliament House.

The aggressive protesters who tried to breach the no protest zone outside the Parliament were baton-charged by the security forces to take the situation under control.

Some protesters also pelted stones and bricks at security forces while a couple people on both sides suffered injuries.

No serious incident occurred as police were able to arrest some of them.

The protesters had shouted slogans like, ‘We don’t need MCC, Can’t sell country’, ‘Parties be warned, scrap MCC’, ‘Respect national sovereignty’ and ‘No MCC’, among others.

They also displayed black flags outside the HoR.

There were rumors that the Parliament would table the MCC today, however it was later found that the agenda was not at all on the list. Meanwhile, the Parliament was adjourned for 10 days after obstruction from the CPN-UML and due to the ongoing general convention of the ruling Nepali Congress.

The MCC pact was signed by the Nepal government and US foreign assistance agency in 2017. However, the agreement is required to be ratified by the HoR for its implementation.

The then finance minister Yuvaraj Khatiwada had, in July 2019, registered the MCC at the Parliament Secretariat for discussion. The MCC has become a controversial issue in Nepali politics as some parties are yet to come clear on their position about the agreement.

The leaders of these parties have been saying the MCC is a part of Indo-Pacific Strategy of the US and is against the constitution of Nepal.

However, the high-level officials of MCC from Washington, who visited Nepal in recent times, have reiterated that neither is it against any article or clause of the Nepali constitution nor is it a part of the Indo-Pacific Strategy.

Meanwhile, a meeting of the Board of Directors of the MCC was held today in Washington, which included agendas regarding the agreement of MCC in Nepal as well.