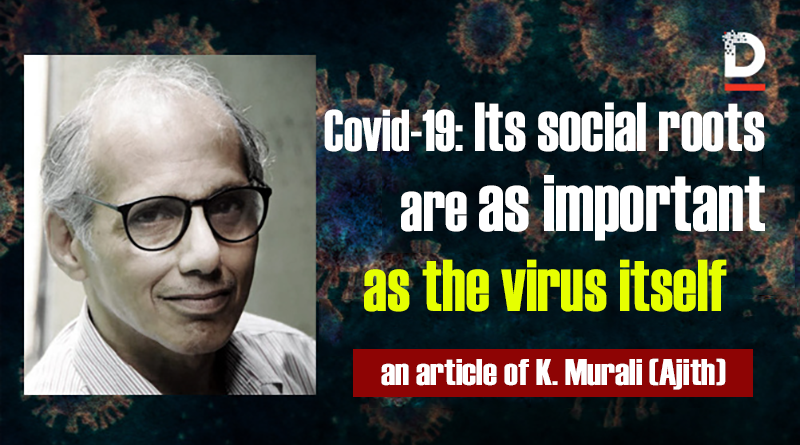 The highest incidence of Covid deaths are seen in developed countries, thought to have better treatment facilities. Though one can think of many reasons, the main culprit is the neo-liberal policies that have curtailed public health services. Lack of timely treatment is one of the leading causes of deaths in the United States and Italy. Many received no treatment at all. For the vast majority of the poor who do not have health insurance in the United States (the majority of African-Americans and Spanish speaking Hispanics), even primary care is impossible.

The same is true of the unemployed middle class. Therefore, they would not have gone to a doctor as soon as they felt ill. By the time they are forced to go, the disease would have gone out of control. Lack of adequate equipment or staff made matters worse. Trump and other imperialist rulers exhibited the heights of selfish irresponsibility at the outset. Rather than caring for the health of the people, their concern was to maintain routine, profit-seeking economic activities. This too contributed to the galloping death rate seen over there. Such a huge loss has been caused by a disease that has a death rate of barely two per cent. This sharply brings out the sheer incompetence and anti-people character of neo-liberalism and its progenitor, capitalism.

The role of these criminals doesn’t end there. There are those who argue that the advent of such pathogens is incidental, none can stop it. Then there are those who think that shortcomings can, at the most, be identified in the measures taken to deal with it. There are those who describe it as a punishment delivered by nature and those who oppose this. Nature certainly hasn’t come as some sort of a transcendental power to punish us. Neither will it do that in future. Yet, something of that sort has surely taken place, in the sense of Engels’ words.

Engels wrote that though man may boast that he has conquered nature, he will, in the end, be given a heavy blow by nature, reminding him who the true master really is. What he meant was the consequences of human actions. These words, which exposed the hollowness of capitalist claims, also hinted at the danger of its destructive development approach.

That is well seen in the origins and spread of today’s Corona pandemic. Some have reduced the matter to genetic causes alone. Thereby they hide the role played by imperialist relations that bind the world. That role is scientifically analysed and argued out in the upcoming lead article of the Monthly Review’s May issue (jointly written by Rob Wallace, Alex Liebman, Louis Fernando Shaw, and Roderick Wallace).

They too start from the wet meat market in Wuhan. But they don’t get bogged down in the food habits of the Chinese, seen as strange in the orientalist gaze of the imperialist world. Rather, their essay enters into the social and economic relations that are revealed by this market. “How did the exotic food sector arrive at a standing where it could sell its wares alongside more traditional livestock in the largest market in Wuhan?” – this is where they begin from.

They point out, “Well beyond fisheries, worldwide wild food is an increasingly formalised sector, evermore capitalised by the same sources backing industrial production.” A chain extends back from the Wuhan market to the hinterlands where exotic and traditional foods are raised by operations bordering the edge of a contracting wilderness. And then a number of trading/transportation chains link up such centers to different countries and big cities. The corona virus arrived, traveling over it, much like SARS that came before it.

Some multinational corporations, such as Johnson & Johnson, have prepared a feasibility map marking where new germ cells may appear in the future. The geographic view that they adopted points to Third world countries,. The Monthly Review essay criticises this approach. It points out, “Focusing on outbreak zones ignores the relations shared by global economic actors that shape epidemiologies.” When these relations are taken into consideration, not Third world countries, but the main sources of global capital — New York, London, and Hong Kong — turn out to be the worst hotspots. These new viruses harmful to humans spread from wild life. Much of that is happening today at the boundaries of capitalism. That is, in the remaining forest areas. Deforestation destroys the habitats of disease-carrying wildlife, thus creating conditions for its spreading out. Within a few days, the new pathogens that began their journey from sparsely populated forests, spread out across the globe, sheltered by a globalisation straddling time and space.

The crux of this essay may be summarised thus: Viruses that had been largely contained through the complexities of the tropical forests have entered the mainstream through the deforestation caused by capital, and deficits in public health and environmental sanitation.

In short, the changes in livelihood conditions and environmental conditions of the vast majority, caused by globalisation and neo-liberal policies, lie at the root of the present tragedy. Its primary solution is the destruction of the imperialist system and the success of the Communist project. That is the only path to realise a humaneness that values human life and redeems nature, of which those lives too are a part.

In fact, both Cuba and Vietnam point to that possibility. They are not socialist countries today. They are countries that have been re-entangled by imperialist relations in one or the other manner, by the restoration of capitalism. When China increased its wages, global monopolies moved to Vietnam. However, some remnants of the socialist era still persist.

The health sector is still largely in the public sector. There are organisations that can contribute voluntary service on a large scale. These countries have been aided by such factors in fighting the pandemic. One can see how the achievements of the old socialist era have benefited China too, now an imperialist country. Keralam, where the public health sector has been largely defended through mass struggles, has been able to combat Corona in a better manner compared to other Indian states. Meanwhile, big private sector hospitals inhumanly turn away people who approach them with a cold or fever.

It remains to be seen how long this will last. The impact that Corona has created is sure to bring about a resurgence in public health care. However, its subordination to the dynamics of capital will impose barriers. The memory of capital is rather weak. There is a good chance that the demands of profit will once again force the public sector to yield to privatisation. Even if the public health system is retained, it could be used as a great source of data that serves capital. That is what was seen in the Springler deal*, which allowed data collection hardly bothering about individual privacy.

Data collected in the guise of serving the public health service could become raw material for pharmaceuticals, insurance companies and others. This is a new, more dangerous, level of privatisation. Capital will be able to profit while hiding behind the structures of the public sector; absolutely indirectly. The same holds for the health app Modi is promoting.

It’s not enough to have a public sector. It must be one that truly serves the people. That will be possible only when it becomes part of a transition towards a society that eliminates the divide between the private and public in the economy and infrastructure. If this is to be revived in any country in the world, not as a shadow of socialism but as a transition to communism, as a continuing revolution, it must be guided by the current heights of communist theory.

* A deal made with a US based data analytics company by the CPM-led Kerala government during the current pandemic.