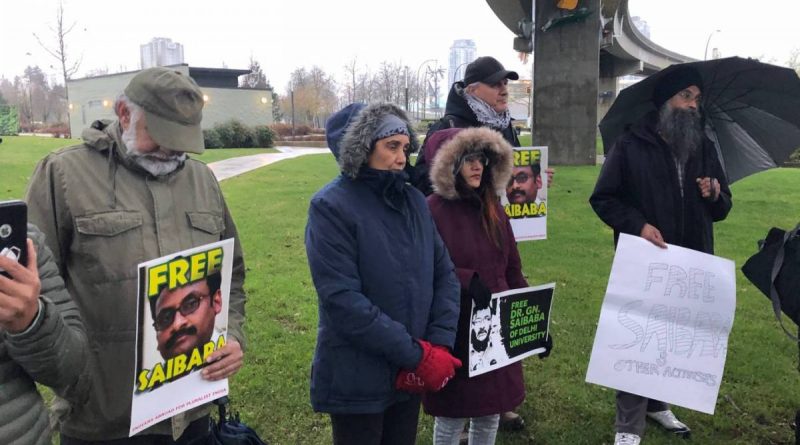 Braving cold weather and rain on a weekday afternoon, social justice activists have come together to raise their voices for a physically challenged Delhi University professor being incarcerated in India.

G.N. Saibaba who is ninety percent disabled below the waist and who relies on a wheelchair for mobility, is serving a life sentence under inhumane conditions. This is despite the continued deterioration of his health because of 19 ailments.

On the International Day of Persons with Disabilities on December 3, Indians Abroad for Pluralist India (IAPI) held a demonstration on his behalf in Surrey’s Holland Park, where speakers unanimously demanded Saibaba’s immediate release on humanitarian and compassionate grounds.

They felt that the current right-wing Hindu nationalist Bhartiya Janata Party (BJP) government is indulging in a double standard by openly shielding Hindu extremists who are spreading violence and terror while punishing a scholar like Saibaba.

He’s facing persecution for standing up for the rights of religious minorities and oppressed communities, particularly Adivasis (the Indigenous peoples of India), who are being forcibly evicted by the Indian state from their traditional lands in the name of development.

The attacks on minorities and Adivasis have grown ever since the BJP came to power with a brute majority in 2014.

Saibaba was charged and convicted after being branded as a Maoist sympathizer. Since Maoists are fighting a class war in the tribal belt, not only Saibaba, but others like him have been frequently labelled as ultra-leftists to suppress any voice of dissent.

Sikh activists in Metro Vancouver came out to show their solidarity. Among them were two members of the Banda Singh Bahadur Society, Ranjit Singh Khalsa and Inderjit Singh Bains. In addition, members of Guru Nanak Sikh Temple Surrey-Delta were also present.

Notably, the Sikh community in Vancouver has enthusiastically supported a petition asking for the Canadian government to intervene in the matter to try to get Saibaba released.

Participants held placards asking for Saibaba’s freedom and shouting slogans against the high-handedness of the Indian government that continues to ignore an international outcry over the mistreatment being meted out to him.

The rally began with a moment of silence in memory of another scholar and activist, SAR (Syed Abdul Rehman) Geelani, who passed away recently. Geelani, who also taught at Delhi University, was close to Saibaba and tirelessly campaigned for the release of all political prisoners.

Geelani himself was falsely implicated by the police in connection with a terror attack on the Indian parliament in 2001 and was thrown in jail. After being acquitted by the court, he became an advocate for political prisoners. (More information on Geelani is available in Indian writer Arundhati Roy’s new book, My Seditious Heart, which is a collection of her essays.)