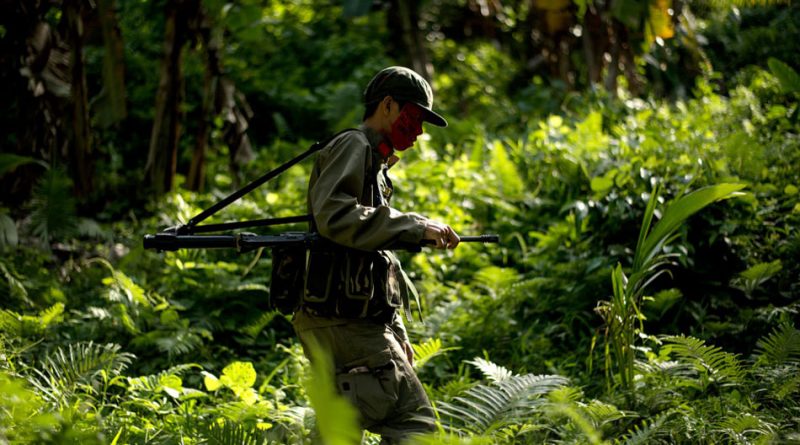 The Chadli Molintas Command (NPA-Ilocos-Cordillera) congratulates the Leonardo Pacsi Command of NPA-Mountain Province for the successful ambush of a platoon of the Charlie Company 50th Infantry Battalion headed by Lt. Pulalonan in Aguid, Sagada, Mountain Province. The battle took place at around 11:30 AM on September 26, 2019. Based on initial reports, killed in action was one soldier while another was wounded. Contrary to the pronouncement of Brig. Gen. Henry Doyaoen, 503rd Infantry Brigade commander, there are no casualties on the side of the NPA.

This focused military operation is part of the US-Duterte regime’s desperate effort to quell the armed revolutionary movement before the end of Duterte’s term in 2022. The Duterte regime is waging a vicious all out war through its counter-insurgency program Oplan Kapanatagan currently directed by the National Task Force to End Local Communist Armed Conflict (NTF-ELCAC) headed by Duterte himself.

The massing of fascist troops in this part of the Cordillera is intended to clear the area of NPA presence, thwart the Cordillera people’s resistance to and pave the way for the entry of plunderous foreign and comprador interests over the much coveted resources of the region. Indeed, the Igorots’ heroic struggle to defend their land, life and resources that the NPA steadfastly supports is labeled by the fascist Duterte regime as a terroristic act that has to be crushed, whatsoever the political and social cost. Hence, the brutal military offensive. What counts most for the traitor and corrupt Duterte is the unobstructed sell-out of our national patrimony to his similarly greedy local cohorts and foreign masters.

At present, applications of two gigantic foreign and local mining and energy companies threaten a wide area of the Ilocos-Cordillera region. Chevron, a US transnational company, and its local partner Aragorn Power and Energy Corporation of the Sy family’s SM Group, plan to set up a huge geothermal plant that would cover seven municipalities including three in Kalinga (Pasil, Tinglayan and Lubuagan), two in Mountain Province (Sadanga and Bontoc), one in Benguet (Buguias) and one in Ifugao (Tinoc). In the three towns of Kalinga alone, the project would cover 25,682 hectares. On the other hand, Nickel Asia, a large mining firm of the Zamora family, and its subsidiary Cordillera Exploration Company Inc (CEXCI) has a mining application that covers 15 municipalities in the region including three in Benguet (Bakun, Mankayan, Buguias), one in Ifugao (Tinoc), six in Mountain Province (Sadanga, Sagada, Besao, Tadian, Sabangan, Bauko), one in Abra (Luba) and four in Ilocos Sur (Quirino, Suyo, Gregorio del Pilar at San Emilio).

Moreover, many other large and mini hydro projects are also currently in different stages of processing to be forced upon communities amidst the people’s opposition such as the 390-MW Alimit Dam in Ifugao, the 190-MW Karayan Dam in Kalinga and the 150-MW Gened Dam in Apayao. Also included are large irrigation projects that require the construction of huge dams and the diversion of rivers such as the ongoing construction of the Chico River Pump Irrigation Project (CRPIP) in Kalinga by a Chinese firm, China CAMC Engineering Company Ltd., and the Iteb Transbasin Dam in Quirino, Ilocos Sur, as an alternative to the Gregorio Del Pilar Impounding Project (GDPIP) or Salcedo Dam that has been opposed by residents of the five affected municipalities in Ilocos Sur.

Ultimately, it is the marginalized masses who will bear the brunt of this ruthless assault on the Cordillera heartland by the despotic regime. It is the peasants, national minorities, workers and other ordinary people who continue to become victims of the already long list of human rights violations in the form of coercion, harassment, illegal arrests, indiscriminate bombings, extra-judicial killings and other heinous crimes of the AFP-PNP and para-military forces. But amidst worsening crisis, poverty and endless sufferings under a tyrannical rule, the masses are more than ever determined to pursue their struggles against their oppressors and exploiters.

Amidst these plunderous projects of imperialist corporations and the local ruling class secured by intensified militarization, the people of Ilocos and Cordillera shall resolutely stand their ground and persevere in the struggle to defend their lands and communities and fearlessly fight the fascist onslaught, deception and psywar of the US-Duterte regime. All the NPA units under the Chadli Molintas Command will always be on the side of the people’s courageous fight. We outlasted the US-Marcos fascist dictatorship and triumphed in our fight against the Chico dam and Cellophil Resources. Together, we are confident to prevail over the US-Duterte tyranny. As with previous counter-insurgency schemes, Oplan Kapanatagan and the NTF-ELCAC are doomed to fail.