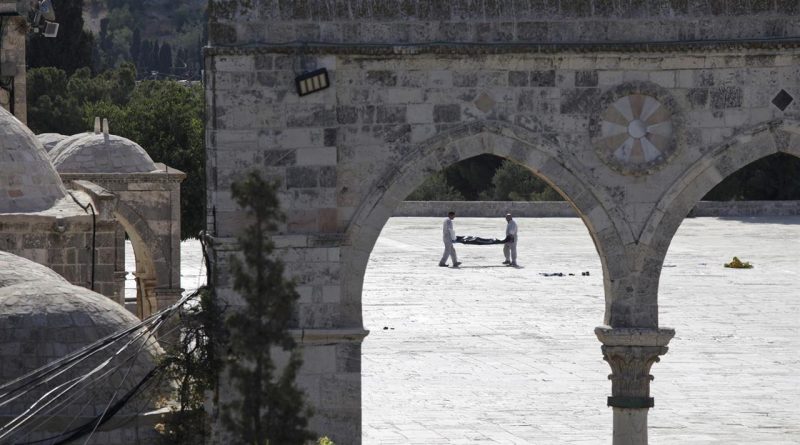 The Popular Front for the Liberation of Palestine saluted the heroic operation carried out by three young strugglers in the courtyards of Al-Aqsa Mosque on Friday morning, which led to their martyrdom and the killing of two armed occupation forces and the wounding of several more, as a qualitative achievement in the resistance of the Palestinian people against the occupation.

The Front considers that this operation is a breakthrough in the security cordon imposed by the Israeli occupation forces on the city of Jerusalem and Al-Aqsa, breaking the arrogance of the Zionist security which sees in the city and in Al-Aqsa an impenetrable fortress.

The resistance was able to engage directly with occupation forces in the courtyards of Al-Aqsa, cconfirming that their is no Zionist soldier or settler safe in the land of Palestine, even in the most heavily guarded areas.

The Front also said that this heroic operation sent a strong message to the occupation soldiers and the criminal Zionist government that their measures and attacks against the Palestinian people will only be met by more operations and resistance.

Further, the PFLP warned against any attempts by the occupation to undermine and attack Al-Aqsa Mosque and its holy position. Any retaliation will be resisted by the Palestinian people and their heroic youth with a real impact on the occupation , its soldiers and settlers.

The blood of the heroes of Jerusalem has mingled with that of the heroic martyr Bara’a Hamamdeh in Dheisheh camp, confirming to all that intifada, resistance and unity are our path to liberation from the occupation and must derail all of the liquidationist plans targeting the Palestinian people and their cause. This operation clearly differentiates the fighters who believe in resistance and the defeated forces who conspire against our cause.

The Front urged greater unity and cohesion to confront retaliatory measures in Jerusalem, emphasizing that strengthening the steadfastness of our people in Jerusalem is a national priority and responsibility.