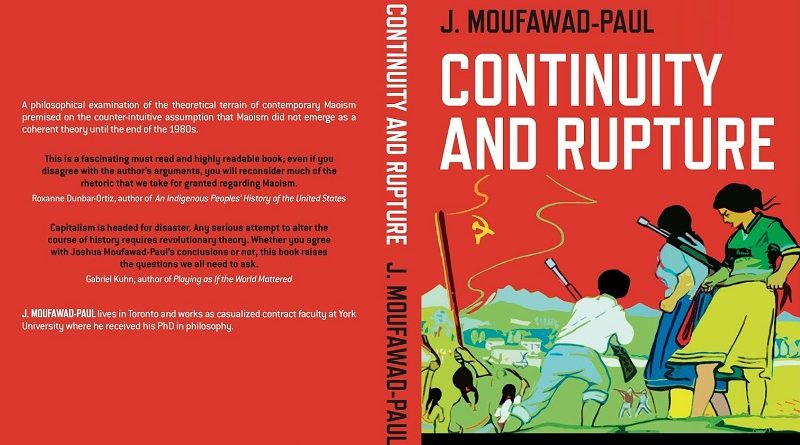 Now that it has been a little over half a year since Continuity & Rupture was released I think it is time to do another post about this book. There are several reasons for this new round of shameless self-promotion: i) I recently signed a contract for another manuscript (details to follow at an unspecified future date – enjoy the mystery!) so I’m thinking about the reception of previous work; ii) though Austerity Apparatus is my latest, Continuity & Rupture remains the more rigorous work that is centered between Austerity Apparatus and The Communist Necessity; iii) sales for Continuity & Rupture have been quite good for a piece of uber-left non-fiction; iv) while the reception of C&R has been generally good, when it hasn’t critiques have tended to misrepresent the book.

The fourth of these above points is the most salient because, as faithful readers will be aware, I tend to get extremely annoyed when readers misrepresent what I produce. Although it is quite common for self-proclaimed argumentation experts on the internet to throw out the “straw-person” fallacy whenever they don’t want to think through their fundamental assumptions, it is also common for these same people––and a lot of readers––to perform this fallacy on a regular basis. You can know what it means but that doesn’t prevent you from misusing it or even making it: misrepresentation is common. Generally I have no problem with people criticizing my work if they can properly represent what they read and, in performing this representation, present a thoughtful counter-argument. So far all criticisms I’ve seen online (which are in the minority of written work on C&R to be clear) have been based on some poor understandings of the text––I wonder if these people even read the book.

So in response to common misconceptions and misrepresentations I will explain what C&R is about in the hope that more people will engage with it honestly, particularly since I happen to believe (because I’m the author and I wouldn’t have written it otherwise) the book is an important intervention. If my introductory essay was not enough to whet the appetite of the radical reader, maybe this will be helpful…

C&R is not focused on exploring Mao Zedong’s contributions to philosophy but is rather a philosophical intervention into the already existing theoretical terrain of Marxism-Leninism-Maoism. I think more than one reader was expecting that I would be writing about the theory of contradiction, or something like this, and was thus disappointed to learn that it was not “philosophy” in the way they had conceived philosophy. This is because I take the practice of philosophy to be, following the eleventh thesis on Feuerbach, an act of interpretation or demarcation, of forcing meaning upon theoretical truth procedures. The broad question of C&R is the following: “Here is what MLM says it is, here is why it says these things, so what does it mean?”

C&R is not about trying to convince non-Marxists to be Maoists but this does not mean it is “preaching to the converted.” There seems to be a group of Marxists, mainly online, who think that every book written by a Marxist intellectual must be aimed at speaking to everyone in every social position and to do otherwise is to “preach to the converted.” This assumption is ludicrous because it would mean that every Marxist/anti-capitalist book must be 1000 pages long since this is at least how many pages it would take to give the entire historiography, sets of arguments, demystifications, to talk about everything as well as the one thing you want to talk about. Some people want you to constantly reinvent the wheel before getting into the thesis of your project, like we need to keep rewriting ourselves. No, the point of C&R begins from a very particular position, one that followed the demarcations drawn by The Communist Necessity: movementism is useless, a return to the kind of Marxism-Leninism before the collapse of the Eastern Bloc is foreclosed, we need a new return to the theory excavated by the great revolutionary movements, and it is from this problematic that contemporary Maoism (which is not precisely the same as what used to called Maoism) emerges.

Indeed, I think the argument inherent in C&R is important for those leftists who have realized the poverty of movementism but are searching for something that doesn’t just go backwards, embracing a Marxism-Leninism of yesteryear. Internet leftism, especially on Twitter, seems to be invested in this backwards looking ideology; I believe it is important to encourage new leftists who are just coming to a communist consciousness to look elsewhere than the revisionist communism, especially since so many seem to be drawn to these old ML articulations, and groups that are still stuck in the past, out of a frustration with movementist bullshit. There’s more than that and, no, to assert Maoism is only “ultra-left” if you’re standing within an opportunist position since the opportunist thinks everything left of their position is “ultra-leftist”.

So here is the general argument of C&R, the simplified syllogism behind the entire book:

Beneath this axiomatic I attempted to excavate the meaning of this sequence, what dilemmas and philosophical quandaries it presents. Of course I recognize that I presented a syllogism consisting of successive conditionals that can and should be challenged, but these challenges only matter if they grasped what I was arguing and the ways in which I defended my position. In the lingo of a first year critical thinking class the argument was valid but its soundness is up for interpretation. Moreover, I attempted to make the above argument sound by thoroughly arguing out each point, providing successive sub-arguments, and this is precisely the practice of philosophy: to force meaning and demarcate through precise and focused arguments.

Overall the argument of C&R can be simplified in this way: if you agree with Marx and Engels and the theoretical terrain they initiated then you must accept Maoism as correct; all iterations of Marxism and Marxism-Leninism that are not Maoist are thus dogmato-revisionist. And, with this final and demarcating claim in mind, it is telling that some internet ML leftists don’t like the term “dogmato-revisionist” nor the history of the anti-revisionist New Communist Movement.

There’s a larger world of revolutionary theory out there, there are mass movements and small group mass work that put your tired revisionist conceptions to shame. At the very least pick up C&R and engage with it honestly since its intention is clear: to argue for what theoretical approach is necessary for building a movement that can end capitalism.