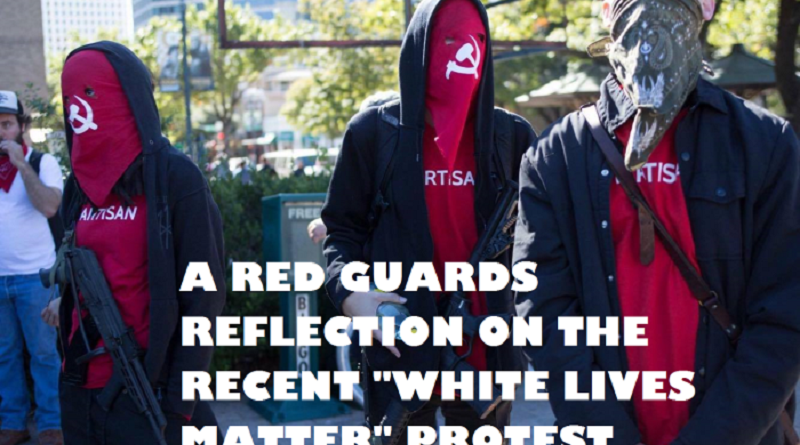 As organized fascists have been attempting to make a presence and gain traction here in Austin, communists and otherwise revolutionary-minded folks have been ramping up our antifascist work. Aside from issuing a call for heightened antifascist organizing among the organizations that already exist, we have also managed to form a coalition of antifascists, which we so desperately need in this time and place. This coalition has served as a nexus for antifascists of all ideological traditions (the overwhelming majority of them being revolutionary communists) to come together in an effort to stop fascism from gaining any support and hinder the ability of fascists to organize. The coalition was formed as a direct response to a planned protest by “White Lives Matter,” a neo-nazi front that announced their plans for protest at the Texas state capitol on November 19, 2016. Antifascists immediately hit the pavement, rallying the masses of Austin to unite in a counter-protest against this public display of white supremacy. This broad grassroots work proved to be fruitful, as those who intended to drown out the fascists outnumbered them by the hundreds and effectively stifled their ability to be seen or heard, surrounding them from all sides and drowning out their pitiful attempts at chants

This counter-protest was rightfully more militant and angry than ones we have seen over the past few weeks since Trump’s electoral win. Since this counter-protest was organized by revolutionaries and not the liberals who have seemingly run out of steam after their week-long run of protests, we were able to reach the parts of the community that aren’t as organized—and aren’t as liberal. Organizations such as Serve the People – Austin, Revolutionary Student Front, Revolutionary Alliance of Trans People Against Capitalism (RATPAC), Palestinian Solidarity Committee, and members of Austin Socialist Collective were some of the most active and militant of counter-protesters.

From the very beginning, antifa outnumbered the fascists. Nobody approaching from the street could have seen or heard the white supremacists, who were stuck on the sidewalk, surrounded on all sides by protesters. This was a planned tactic to prevent the cops from keeping the fascists on one side of the street and the antifascists on the other. As the event became more tense, police started to line riot cops up and down 11th Street in preparation for what seemed like an all-out riot unfolding. Antifascists protesters were attempting to entice the white supremacists to step outside of their protective barrier of cops. The nazis looked visibly shaken at this point and soon the pigs on horses were brought out to create a bigger space for the nazis. At one point the police used the horses to push people out of the way to make room for the barricades and in the process they trampled a few protesters and pushed the crowd into a rope that was blocking off the space the cops were trying to move people into.

The fascists left earlier than planned and required a riot police escort to protect them from the masses, who at one point were chanting “Fuck a nazi up! Fuck a nazi up!” As the “White Lives Matter protesters” filed out one by one with their pig escort, the counter-protesters were quick on their tail and chomping at the bit to get through the line of riot cops that attempted to create a barrier between the angry masses and the scared-ass fascists. The antifascists followed several blocks, occasionally breaking through the wall of cops and snatching up a nazi or two. The nazis cowered and ducked into the capitol parking garage, which APD had to surround and flood with pigs and horses to keep protesters from making good on their chants, which some managed to do before the fascists drove away.

It is our duty as communists, and specifically as Maoists, to carry on the fight against fascists that so many of our predecessors have lost their lives defeating. We DO NOT believe in freedom of hate speech, and we will always confront and shut down these vermin when they attempt to make an appearance. As Maoists, we firmly believe that white supremacists need to be met with and overwhelmed by a greater force. This is why we called for an armed partisan unit under our command. Partisans are not a people’s army, but they should still be guided by the party (or, in the absence of a party, disciplined cadre). Partisans are firmly on the side of the people in their fight against fascism and exist for the purpose of ensuring survival. We will never again have another Greensboro Massacre, where the KKK killed communists who were shouting “death to the Klan!” And our blood will not be the only blood spilled if they try to stab us as TWP did to antifa in California. We will fight back every single time!!