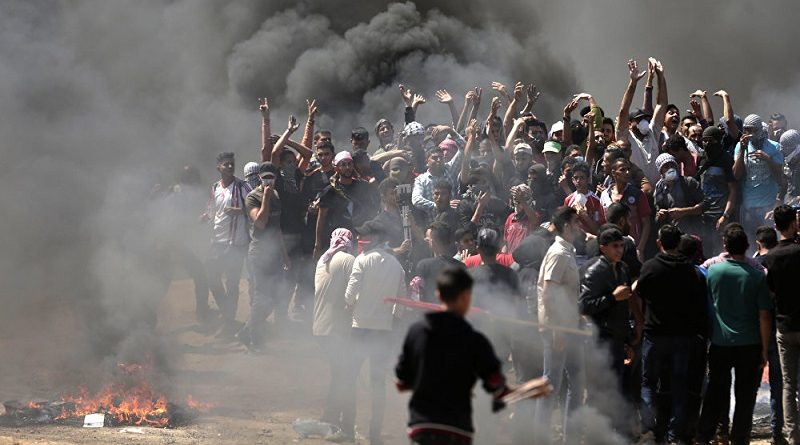 Following the massacre committed by the Zionist army in Gaza on 14 May, when Israeli occupation forces killed 61 Palestinians as they participated in the Great Return March for their right of return and to break the siege, Comrade Khaled Barakat, leftist Palestinian writer, participated in a discussion with the PFLP media committee.

“What happened in Gaza is a revolt to throw off the Israeli occupation and to break the siege that has continued for over 11 years,” said Barakat. “The popular classes in Palestine are reviving their role and claiming their cause as they witness a direct attempt by the United States, Israel and Arab reactionary regimes to liquidate the national rights of the Palestinian people.”

“The Palestinian people in Gaza have taken the responsibility of breaking the siege into their own hands,” Barakat said. “The role of the popular classes has also been represented by the wide participation of youth and women in the struggle, which has created a rich soil for the creative development of forms of struggle, from flying kites to throwing rocks to bringing back the spirit and the lessons of many intifadas, including the great intifada that was being born and developing 30 years ago.”

“The scene in Gaza, as Israeli soldiers shot live ammunition at unarmed civilians, was accompanied by a simultaneous celebration in Jerusalem of the opening of the U.S. embassy in the occupied Palestinian capital,” noted Barakat. “This move by the United States and the Trump administration is seen by Palestinians as a direct attack on their rights, particularly their rights in Jerusalem.”

“Today, the triangle of aggression confronted by the Palestinian people is the same one as it has always been – imperialism, Zionism and Arab reactionary regimes,” Barakat said. “This is manifest today in the relationship between Trump, Netanyahu and Mohammed bin Salman – the true ‘axis of evil’. It is in this context and against these forces that our people in Gaza are leading, for the past month and a half, these heroic and brave popular efforts under the slogan of return and breaking the siege.”

Barakat noted that “the massive popular participation that has far exceeded the number of ‘faction supporters’ has revealed the immense popular anger and resistance against the continuous siege and all of its components and accomplices, especially the dirty role of the Palestinian Authority in Ramallah who have been punishing our people in Gaza in an attempt to create an internal explosion of the Strip and divide and disarm the resistance.” However, he said, “the popular classes have turned this instead into a wave of uprising against the true enemy, elevating the principles at the very roots of the Palestinian cause: return and liberation.”

“This movement reflects the the wisdom of the masses, the popular classes, who constitute the basis of the Palestinian armed and popular resistance,” Barakat said. “If you remember, the siege was supposed to be lifted in 2009, 2012, 2014, after great sacrifices and heroism from the Palestinian masses. However, after every aggression and war, the siege has become tighter and more brutal. The so-called ‘Egyptian guarantees’ that accompanied the end of each war became empty promises and Israel never honored any of them.”

Barakat noted that “our message today to the world is to expose the role of the so-called ‘international community,’ particularly the U.S. and Europe – the imperialist powers who are responsible for Zionism and colonialism in the region. We also emphasize the importance of not being misled by the Western mainstream corporate and official media, who is trying to turn the struggle over Jerusalem into a issue of competing religions and turn a massacre in Gaza into ‘clashes.’ In addition, it is important not to present a false perspective on the Palestinian cause in order to appear more acceptable or appealing to these same Western media by minimizing the principles and demands for which tens of thousands of Palestinians are marching and confronting live fire and for which Palestinians have struggled for over 70 years.”

“As there is a great deal of sacrifice, we also see a great deal of community and social solidarity and unity,” Barakat noted. “It may seem as if our people in Gaza are fighting alone these days, but they are not. This is a general feeling that every Palestinian popular contingency has today, whether they are Palestinians in Lebanon, Syria, Jordan, ’48 or in exile and diaspora. However, this new wave of Palestinian popular resistance is bringing Palestinians together in a popular unity and not in a mere facade of official unity. The massive sentimental unity that Palestinians feel must be transformed into a material unity of action.”

“This week, for example, we’ve seen unified calls for action in almost every Palestinian community. We see spontaneous actions in which all Palestinians from different political trends are participating. So the Palestinian people are not divided and separate from one another, despite the talk of ‘division,’” Barakat said.

“Palestinians today are facing great challenges. It is not the first time in the history of their struggle that they do so, but it is also a part of what the people of the region are experiencing – a hegemonic, intensified attack by the United States, Israel and Saudi Arabia and an attempt to shift the conflict from the anti-colonial struggle between the Arab people and Israel to create a conflict between the Arab people and Iran,” Barakat said. “Trump’s withdrawal from the Iran nuclear deal, the latest effort in the attack on Iran, illustrates how the United States does not back up its own words and is happy to throw away treaties at a moment’s convenience for the interests of its rulers. Trump is not only threatening the future of the people of Iran, but is also threatening the people – not the interests of capital – in Europe and the United States.”

“In this context and because of these facts, it is absolutely necessary today to build the unified national resistance front that includes armed resistance in particular, with a unified national strategy achieved through popular participation. The free participation of the Palestinian people in the liberation struggle is both a duty and a right,” Barakat concluded. “Today, all Palestinians are asked to assume their responsibilities – and the first is to reclaim their cause from those who seek to sign deals on behalf of the Palestinian people. In order to do that we must create space for the widest Palestinian participation as well as the widest Arab and international participation and alliances.”