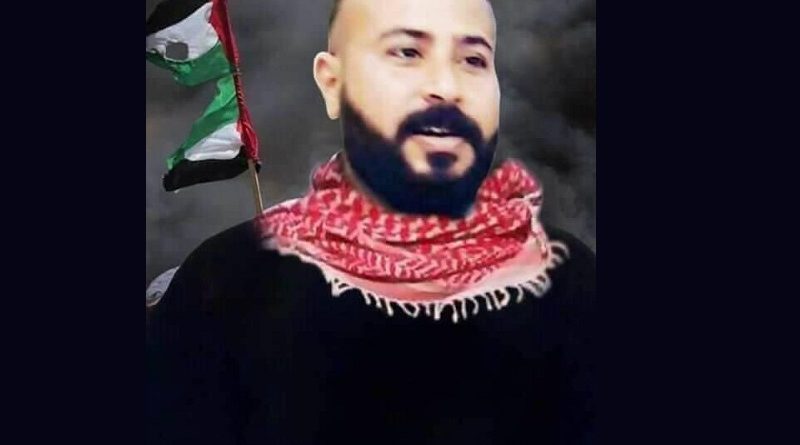 With deep pride, the Popular Front for the Liberation of Palestine salutes its esteemed martyr, Ahmad Abdullah Abdullah al-Adaini, who was martyred as he participated in the uprising of return near al-Bureij.

The Front sends its sincere condolences to the family of the martyr, his friends and his loved ones on the occasion of the loss of this courageous, intellectual and revolutionary comrade. His departure is a deep loss to Palestine and to the Front. The comrade was a strong example of commitment, awareness and dedication to the principles and ideals of the Palestinian people. His vast capabilities made him an esteemed contributor to the struggle; he never left the field and especially the march for return, carrying high the banner of its goals and advancing with his comrades until his death.

The martyred comrade was born in the Gaza Strip in 1981 to a family from Tarabin in Bir Saba. He was a member of the leadership of the PFLP in Deir al-Balah and its secretary and a member of the Palestinian Progressive Youth Union. He studied in Yemen and was distinguished by his proficiency in the English language, which he used to emphasize Palestinian principles and expose the realities of the occupier. He was active in voluntary associations and relief work, especially in the Zionist aggression on the Gaza Strip in 2014.

He was one of the first comrades to join the activities, events and committees of the Great Return March, never disappearing from the camps of return, continuing to participate in the marches to the colonial fence and marching toward our occupied Palestine, believing firmly in the inevitability of liberation. He was martyred along with 60 others, shot down as they marched for return.

The martyr lived according to the principle, “If you are not involved, there is no value to your educated thoughts,” according to the words of the revolutionary martyr Basil al-Araj, who marched with comrade Ahmad on his path and that of all free intellectuals.