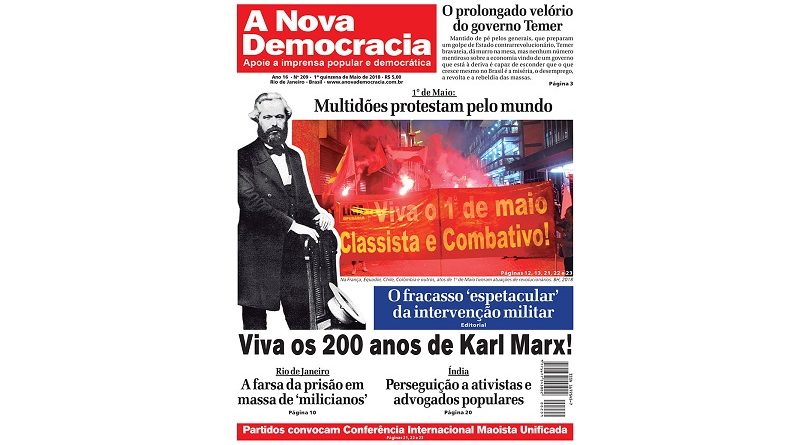 Investigations into the murder of councilwoman Marielle Franco have so far been under the cloak of silence and complicity. Since this was making things look bad for the gangs of police and, principally, for military intervention, the Public Security Minister, after 40 days, went public, still, to utter truisms of the sort that indicated the involvement of militias in the crime. This was not confirmed by the Secretary of Security, who stated that he would only speak on the matter when the investigation was completed.

In the meantime, the Civil Police, under the command of the military intervention, elaborates a mega-operation which only resulted in additional abuses against the people and more demoralization of the repressive forces of the old state. A bizarre spectacle with the arrest of 159 people who were having fun at a party in Santa Cruz, on the west side of the city, paid for by taxes, on the allegation they all had links with the militias and therefore, would be justified as flagrant, which would imply sending everyone to the Gericinó Penitentiary Complex in Bangu.

The monopoly of the media soon sought to spectacularize this event around the world as a great blow to the militias of Rio de Janeiro. And even after the Public Ministry and Public Defender showed that 139 prisoners had nothing to do with justice, the Minister of Public Security stated that “everyone had to say because they were at a militia party.” The answer was given a few days later by a resident when interviewed by Globo: “Well, here the vans are from the militia, the gas is from the militia, the bakery is from the militia. You want me to do what? Move me from the neighborhood? ”

The shot once again backfired. What stood out most from the event was the organization, commitment and strength of family members and, let’s face it, the mothers, wives and sisters of the prisoners. There were seventeen days of permanent mobilization with daily demonstrations until they folded the Judiciary and pulled their people out from the web of the rotten prison system. By the way, one of the institutions – overcrowded dungeons – that the military intervention intends to preserve.

The failure of the military intervention in the objective for which it was announced and justified by the monopolies of the press – applauded by almost all the initials of the Single Party – is already exposed in a flagrant way. After successive shows of bravado against the “criminal organizations” issued by the general intervenor, the Minister of Security, and other spokesmen of the Armed Forces, their actions only left stamped their own inability to disrupt the groups of killers and extortionists from inside and outside of the police and demonstrated that they will not accept the withdrawal of their clutches of power. Added to this is the fact that after two months of intervention all crime rates have increased.
It is even more evident that military intervention, as part of the civil war against the poor, cannot conceal its reactionary anti-people character, and confirms that the crisis of the state machine that borders on insolvency in Rio de Janeiro is not only its own, but of all the old Brazilian State.

An organized people is capable of everything. Episodes like this, of the mobilization of the women of the people, demonstrate that the masses no longer accept the vile treatment that the ruling classes and their slaves of this state of great bourgeois and imperialist landlords reserve for them: mass arrests, massacres, invasions of neighborhoods and shantytowns and political murders like that of Marielle.

The warnings we have made that a counterrevolutionary military coup is under way are due precisely to this motive: the ruling classes tremble at the imminent possibility of the popular uprising in the search for a New Order, although for most of the masses it is whatever thing is opposed to what the institutions of this old rotten democracy mean. Their vanguard and their organizations that rapidly elevate their politicization and conscience will show them patiently and methodically in every protest struggle, in every protest and in the political struggles for Power that this New Order is the New Democratic Revolution. This task is historically overdue and pending achievement.