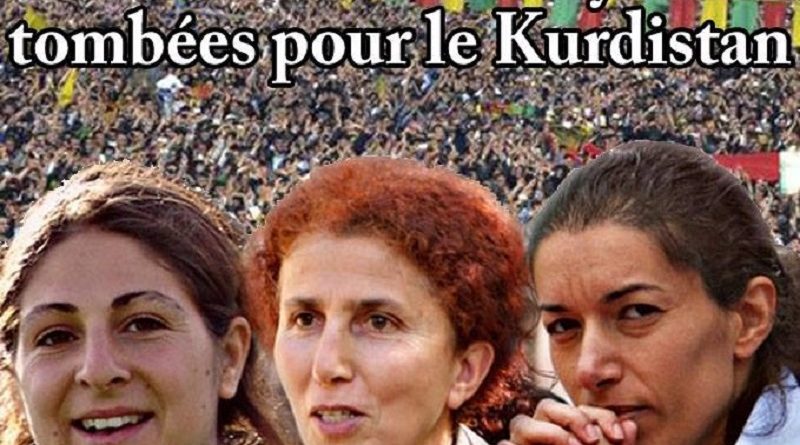 On 9 January 2013, three Kurdish activists were killed in the heart of Paris, murdered by firearm in the Kurdistan Information Centre. These women were named Sakine Cansız, Fidan Dogan and Leyla Soylemez. All three were Kurds progressive activists, Sakine Cansız was a leader of the PKK (Kurdistan Workers’ Party), a party which she participated in the creation in 1979.

First of all we would like to honor the memory of those three activists, fell as martyrs there is now two years ago. These activists were murdered because they were Kurds and revolutionary , because they were fighting for a free and progressive Kurdistan because they had decided not to head down against injustice and oppression of their people.

Two years later, this fight for Kurdistan is more topical than ever, the heroic resistance of Kobané, which has become the Kurdish Stalingrad, rescue of the Yezidi by the PKK brigades and YPG / YPJ, the struggle alone against the obscurantist reaction of DAESH handed the Kurdish issue to the forefront. The struggle of the Kurdish people for their independence is right and progressive. Our duty as communist is to express in this regard a proletarian internationalism and of a particularly concrete solidarity by attacking our own imperialism who is a historical ally of the Turkish bourgeoisie.

It is on the french ground that the three comrades were executed, and since then the investigation stalled, even if the police arrested Omer Guney the presumed gunsel , but nothing is done to determine clearly the sponsors of these murders . The man arrested was close to gray wolves, association linked to the fascist MHP, and having for long time made the dirty work for Turkish governments.

We do not believe that France is innocent in this case, French imperialism has for long time interests in common with the Turkish reactionary governments. French bourgeois justice demonstrated an accomplice passivity towards the responsibles for these murders. We can not have confidence in the justice nor the French police, they are weapons in the service of the bourgeoisie. In France today there are many revolutionary activists detained Kurds and Turcs, and the courts condemn right and left foreign revolutionary when they did not expel them directly to their country of origin. The French bourgeoisie knows how to recognize his enemies and all progressive and revolutionary forces representing the interests of the proletariat and the oppressed peoples are tracked mercilessly.

The fascist Turkish government meanwhile, has also no interest that the truth about the execution of militants of the PKK come out. Successive governments in Turkey have always led the war against the Kurds, killing at large scale, imprisoning and murdering the people and their representatives. Today Erdogan playing a double game, looking from one side to disarm the PKK by a peace process and on the other hand by suppressing them directly as with the latest bombing of PKK positions near the village of Daglica or indirectly by providing logistical and military support to the Islamic State in its fight to enslave Kurdistan.

On the occasion of this sad anniversary we wish to affirm once again our internationalist solidarity with the Kurdish people, its demands and aspirations for freedom and independence. Let us honor the memory of martyrs by honoring the cause for which they gave their lives. More than ever proletarians and oppressed peoples must go hand in hand. Every revolution strengthen the revolutionary movement, the victories of progressive Kurdish and Turkish communists are usefull for the struggle of the proletariat in France and vice versa. The revolutionaries of the world are linked, all our struggles are all one and every comrade who falls for the cause of the people is our comrade!