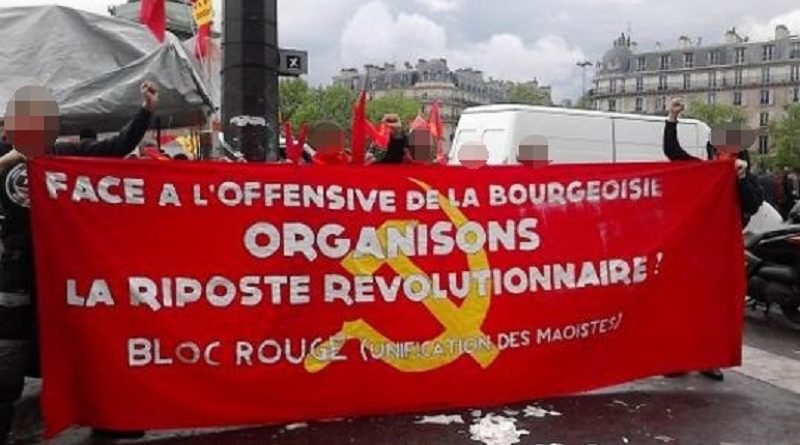 Today, January 7, 2015 in the morning, two armed persons entered offices of Charlie Hebdo with Kalashnikov’s to murder the people present in the premises.

Several journalists and cartoonists are murdered, and a worker or an innocent worker responsible for the maintenance of the building. In total the media announce 12 victims.

According to the information we have at this time, the attack against Charlie Hebdo was performed by religious reactionaries acting in the name of Islam, many suggest the videos suspect, even though we can not exclude a manipulation.

In all cases, we strongly condemn the religious reaction, they massacre in Kobané, it is an excuse for the colonization of Palestine, or that through the streets in France to fight against gay marriage.
We know that religious institutions are reactionary forces that have always served the interests of the powerful.

Faced with social deprivation, racism and the weakness of the revolutionary camp, many people in revolt and disillusioned by this company are seeking a violent response or not in religion. However, we must not decieved The exploitation and oppression are material realities fruits of an economic system operating according to the law of maximum profit.

It is the bourgeoisie that creates misery and nobody else. We must not wait for a solution – the only solution is for workers to take power.

Following the crimes committed today, there have been many reactions, many of indignation which is a good thing, however, an act barbaric and unjustifiable it is, must in no case to embark a dead outcome.

No, it does not exist in France a great national unity behind the republican valuesthat transcend the classroom. This is even more true that the bourgeoisie in power has a responsibility in the times we live in. French imperialism, exploiting the peoples of the world and military intervention in countries of the Middle East is responsible for the misery of the people who live there. France also played a dangerous game by supporting certain groups in the inter-imperialist confrontation that took place on Syrian soil, or by arming the people it claims to be fighting in Libya. All this has engrainé hatred against France symbol of oppression and led to the army action. It is the imperialists who create the terrorists!

Added to this is the prevailing racism and the rise of fascist forces in France. It is certainly right to revolt against this racism and fascism but this anger can been exploited by reactionary feudal forces.
Charlie Hebdo is now targeted by the attack is not innocent in this matter. Like all French media, it participated in the rise of Islamophobia in France by putting fuel on the fire when the so-called “debate on national identity” in Islamophobic terns.

To do this in the name of freedom of the press is to put the entire Muslim community or persons treated in danger from racist attacks. However, no more attacks that racism is justifiable. The daily racism is used to divide the class and undermine social peace. We are not fighting in the name of any religion but on behalf of our class, multicultural and international working class. Those who seek to divide us, whether religious or political, are criminals.

Faced with the attack against Charlie Hebdo, it is certain that we will hear the wolves howl. The National Front and reactionaries will take advantage of this crime to accent a bit more their racist campaign and seek to play on the righteous indignation feelings to penetrate his fascist ideas in the masses.
Marine Le Pen announced that she had to “liberate our word against the Islamic fundamentalism”, which sounds in his mouth as “free speech against Muslims” after countless racist campaigns, xenophobic and anti-Muslim her party has shown.

We must redouble our antifascist vigilance because there was a safe bet that the fascists will try to seize this event to deepen their reactionary mobilization in a climate where a rally under the slogan “Islamists out of France” .

Republican resistance and supported by the fascists of the Jewish Defense League had already been called on 18 January in Paris, based on the similar movement Pegida in Germany, taking the slogan of neo -nazis …; where the fascists want to organize Lyon announced themselves response; where “intellectuals” as Finkielkraut, Zemmour and other Houellebecq.

We use speech in prime time reminding our old dark years before the second world war; where the PS government, pursuing racist policies of the previous government and the policies guaranteeing the bourgeoisie profits based on the ever-increasing exploitation of the workers, hollow bed of fascism; and where the various parties, organizations and -fn fascist groups in head- continue their development.

So we need to increase our vigilance and anti-fascist oppose their maneuvers,because once again the facists act their their goal is to divide us, to submit to the capitalist order, the dictates of big business. It is fair to dismiss religious feudalism, it’s just being outraged by these crimes, but fascism is as criminal and Islamophobic are reactionary barbaric, as much as the terrorists who fired on Charlie Hebdo.

However, the fascists are more dangerous because they are placed as a strategic proposal for the bourgeoisie in its struggle against the proletariat. The example of struggle against religious feudalism that should inspireus is that we show our Communist comrades Kobané alongside Kurdish fighters and fighting, demonstrating what is ultimately the struggle against the feudal reactionary religious: the revolutionary struggle! On the other hand, we must not confuse the religious sentiment of the masses and the fascists who rely on this feeling to establish their domination over the people.

Our watchwords must be:
No national unity behind the bourgeois republic makers of wars and misery!
Do not give in to the fascist propaganda that exploits barbarism to the account of the employers!
Denounce the criminal reactionary religious who serve to weaken our struggles to divide the people and spread dangerous feudal ideas among the masses!
Solidarity with Muslim masses that go back undergo Islamophobic wave after this attack!
Crowd together around the working class, the only bulwark against all the barbarities!

DOWN WITH RELIGIOUS REACTIONARY !

DOWN WITH IMPERIALISM AND FASCISM!