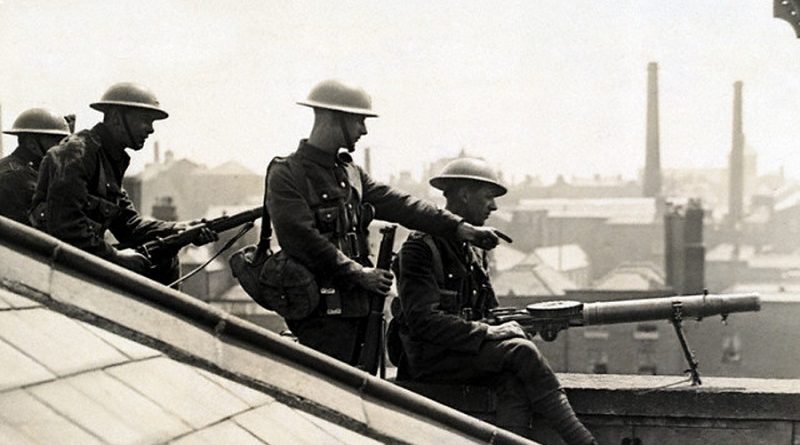 Ireland National Liberation Struggle United Kingdom
January 22, 2017 C. Kistler Brexit
In now seems likely that when Britain leaves the EU, some form of physical border will be reintroduced between the occupied six counties and the 26 county free state.

There is a lot of talk in establishment circles about this taking the form of a ‘customs’ border, but there can no doubt that any physical border will result in an increase of armed crown forces harrasing the daily lives of Irish Citizens.

Those who sit in Stormont, Leinster House and Westminster are very keen to play down the reintroduction of a physical border. They want to play it down because they know that a physical border in our country will expose before the word that the situation in Ireland is far from normal, and that the struggle for national liberation is far from over.

Despite what we have been told since 1998, Ireland is not a normal society. The Good Friday Agreement did not, and is in fact incapable of removing the root cause of conflict in Ireland, namely imperialist interference.

Today in Ireland, there are two failed artificial states. Partition is enforced by 5,000 full combat British troops, a paramilitary police and hundreds of British spooks and spies. The people of Ireland, north and south remain exploited by British EU and European Imperialism.

Brexit looks set to highlight these contradictions, placing the question of British interference in Ireland back into mainstream political discussion. If Brexit can reawaken the masses of the Irish people to the reality of partition, the biggest issue facing the Irish working class, then there is hope for a renewed and rejuvenated struggle for national liberation.

It’s time to smash the border and remove the interference of British, EU and US imperialism in Ireland. Let Brexit be the catalyst needed! It’s time to fight for the Socialist Republic!