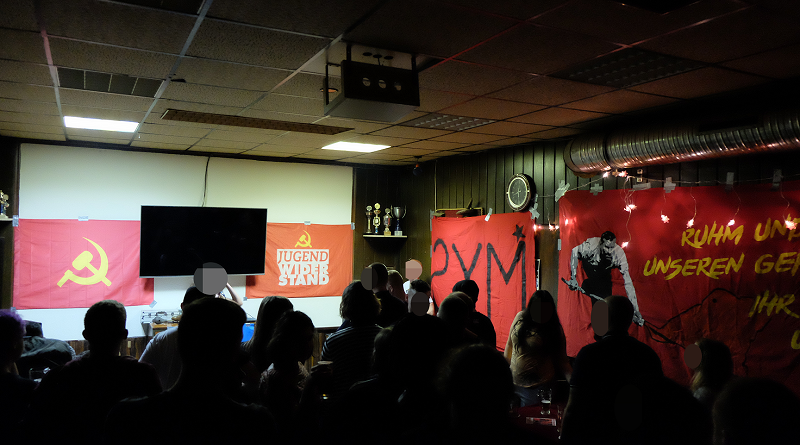 We’re sitting here together today because tomorrow we will celebrate the Lenin-Liebknecht-Luxemburg demonstration.

This demonstration is part of our tradition as German revolutionaries and workers.

A tradition that was written in blood. Written with the blood of hundreds and thousands of fallen and murdered comrades. A tradition that, despite mountains of bodies in prisons, on battlefields and in concentration camps, they could not kill.

A tradition that tells us stories like the Sailors of Kiel, who no longer wanted to keep the oppressors, their henchmen, and the senior officers in custody, so they marched to Berlin and made the goverment fall, carbines on their shoulders and red flags in their hands.

A history that speaks also of how the workers and poor broke the power of the bourgeoisie on the sates of Mannheim, Brunswick, Munich and Bremen and declared Soviet Replublics and defended them for days on end under the artillery fire of the reactionaries, who had already begun painting swastikas on their helmets.

And they fought at last, because they looked East over the border and saw how their brothers in class, under Lenin’s leadership, crushed the Tsar and the bourgeoisie and how they raised their new power with united hands. They saw how out of all the sacrifices and struggles of the mighty Soviet Union, it grew and took new courage from it’s birth.

The next act of history is a powerful legacy that we take a binding oath to.

On December 30th, 1918, Karl Liebknecht and Rosa Luxemburg founded the Communist Party of Germany (KPD) out of the wreckage of the failed Spartacus Uprising and in the fires of class struggle. They thereby gave our class a head. They bound the best sons and daughters of the proletariat together in an organization. This is their life’s work and the greatest gift they gave the German people.

It was this party that, under the leadership of our immortal leader Ernst Thälmann, risked the Hamburg Uprising. Their partisans fought in Spain against the fascists, their Rotfrontkämpferbund protected the streets of the Worker’s Quarter, their cells organized resistance even in the dark dungeons and concentration camps. With the help of our brothers in the Soviet Union they distributed grain in the slums, established Red Aid, founded women’s committees and practiced rebellion. Weaponry acquisition. The Bolshevisation of the Party. The Ruhr Red Army. Strikes. Rising, not bowing. Again and again. The class rioted and distributed.

They no longer witnessed how the Proleteriat continued to rise up under the leadership of the KPD because on the 15th of January, 1919, their lives ended. The story I tell today took a dramatic turn.

Freikorps shot them, on the Social Democrats’ orders! To this day, the Social Democrats have switched to the side of the exploiter. However, the knowledge of this came to both of them too late. The commanding officer Waldemar Pabst reported much later, in 1969, about the traitor Pieck (whom the revisionists later made Chairman) and how he chirped and revealed the position of the Spartacists. Pabst also reported how collectedly and quietly Rosa and Karl endured the abuse and how they looked death calmly in the eyes.

They had no anger. They had no disbelief. All that they had, they gave for the people. Their legacy lasts even today. Their actions made them immortal.

What we owe them is the gift of what they gave us to do in their lifetime. They still pass the baton. The last noteworthy leader of the class and Chairman of the Party was Ernst Thälmann. Through the dark epoch of fascism, through the epoch of the revitalization of German imperialism and the division of our nation, to the so-called reunification and the reality before us today, he passed it to us.

Let us pick up the baton! Let us fight! For the rebuilding of the Communist Party of German! Let us fight for proletarian revolution!

Let us swear it to Lenin, because he put the power in our hands for the first time with the Soviet Union. This year the October Revolution will be 100 years old! Let us celebrate it and call to the masses in it’s memory how strong they are when they have a united party and how the ruling classes tremble before us.

We stand here today before a powerful opponent. Without a party. Without a leader like Karl, Rosa, Lenin or Thälmann were. Without weapons. Without an Army.

But there is our history. It teaches us how to build our party, how to fight, how to serve the people, how we bring every oppressor to their knees, how “completely ordinary workers” become heroes.

And this history, is OUR history! And above all it does one thing: