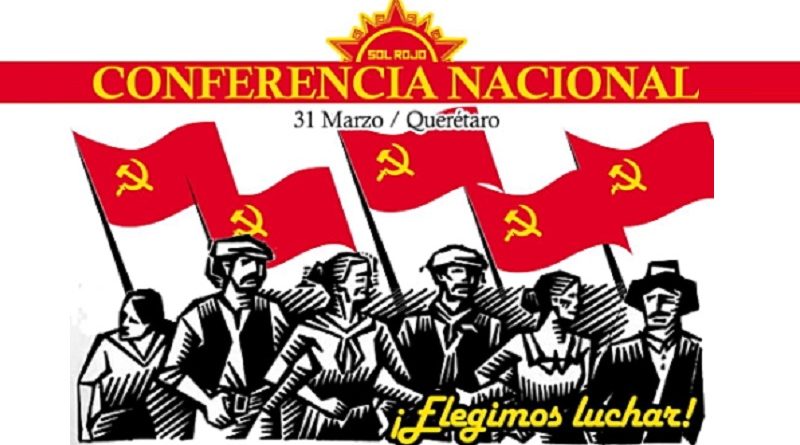 We are saluting the memory of the martyrs who have offered their lives with generosity for the sake of the proletarian revolution.

We are paying homage to our comrades Faustino Acevedo Bailón (May 4, 2006), Alfredo Errestre Vásquez (October 13, 2007), Rosalino Días Barrera (October 31, 2008) and Paulino Salud Landiz (May 4, 2009), fallen in combat against paramilitary groups in San Blas Atempa, to our companions María Nieves Catarino, Perfecto Amador Mayoral, Mateo Roberto López and Anglea Osorio Melo who died far from their customs and communities of origin, San Miguel Copala, being victims of forced displacement by paramilitary groups; we are rendering honor to our dear comrade Javier López Martínez, Comandante Rojo, people’s fighter and ex-political prisoner who died this past March 19 in the rebel community of Francisco Villa, the community that he constructed with his own hand together with hundreds of proletarian families who took over a complete subdivision to be able to live there and put it at the service of the revolution.

In memory of all these comrades, we declare:

For more than 500 years they have imposed a war of domination, dispossession, and oppression on us which has resulted in slavery and exploitation, in terror against our peoples.

In this unjust war we have come to know the violence of the exploiting classes, the deceit and transfigurations of entire generations of tyrant, where the oppressors of today: bureaucratic and comprador capitalists, large landowners and imperialists, are the inheritors of the power of the conquerors of yesterday.

They snatched the land from us and tried to destroy our identity, our culture, our memory. To that end, they changed the names of places, they imposed their government, their religion, their language, on us. That is why we maintain that neither their New Spain, their empire, nor their Republic have represented us.

They converted the dates of their false revolutions into holidays, they put on sham festivities for the centennial and bicentennial, all while they dismantled the conquests of the working class, while they dismantled the communal lands. What has cost the people so much blood in its struggles, they have demolished, they have sold, they have destroyed and perverted. To that end they have relied on innumerable lackeys and coryphes of the regime, many times from the so-called “legal left,” from the camp of modern revisionism which tries to ideologically disarm the proletariat and the people to traffic in its struggles using revolutionary discourse and phraseology, which at the end of the day calls to vote for the tyrant in one of its various versions, the “most progressive,” the “lesser evil.”

They would like to sweep away our class and our communities, and when they encounter the response of the workers and the people head-on, they initiate repression, which grows in level, going from selective to massive, first to dissuade and then to try to extirpate the bad from the roots.
But the oppressors don’t know the root of the problem. Neither do they balance their accounts, and they ignore the national geography.
To that end, they respond with state terrorism, with the war against the people which deepens in lockstep with the deepening crisis of bureaucratic capitalism and the large estates, all dependent on imperialism, principally North American.

The thousands of dead and disappeared, the hundreds of political prisoners, the forced displacement of peoples, the dispossession of lands and territories, in a nutshell, the fascist persecution against the working people is precisely the reflection of this unjust war against which the organized force of the workers of the city and the countryside is precisely opposed. We say that it is right to rebel!

In this same context, electoral democracy in Mexico continues being a farce and its electoral reforms have only been varnishes of legitimation for the anti-people regime, a regime where no electoral party represents the working people, because all of those parties have been formed, paid, advised, directed, and oriented by the dominant classes and their various factions.

We do not forget that the PRI, the PAN, the PRD, the PVEM, the “Citizens’ Movement,” the PES, the PANAL, etc. are parties of the big bourgeoisie and have voted a thousand and one anti-worker and anti-people counter-reforms for the benefit of its desires, as good administrators of the regime.
Neither do we forget that the political agendas of those parties, including the social democrats like MORENA and PT, are diametrically opposed to the most heartfelt demands of the population, they say nothing regarding the political prisoners, the disappeared, the assassinated, the displaced peoples, the dispossession of lands, the systematic violence of the patriarchy on women, principally on the women of the people, etc.

With the vote, they want to give us the possibility of electing who from the bourgeois power will crush us every six years, the traffickers of our sweat, on-call mercenaries. It is like a perverse representation where the condemned public can elect their executioner to then humbly prostrate themselves before the noose or the guillotine. That’s what the upper crust, the owners of everything, the parasites of always, want.

And for every slave that refuses to choose between the whip and the yoke, there is always the option of prison or death.

Responding speedily to this disjunctive, the opportunists, the reformists and the revisionists run hectically shoving each other to mark their own flanks with hot iron, some promoting the vote for one candidate or another, others promoting the vote of shame against all but one, and others still trying to convince themselves that elections are “a form of struggle” or that elections “represent the popular will,” and thus they brand their own flank with red-hot metal to demonstrate their failed dialectic.

We who have been slaves, who are sons of slaves and nephews of slaves, choose not to have a foreman, to not accept any yoke, to not flog our own principles with hot iron, nor be complicit in the legitimation of the regime, nor in its imposition, nor in its transition.

We want vengeance for the sweat, the blood and the pain that they have violently thrust on our class and our people.

We maintain that despite the maneuvers of the regime and its lackeys, the workers and the people have fought and will continue to fight.

We have chosen the longer route, the more difficult and the more rugged route. On that route we will defend land and territories, recovering them, liberating and occupying them. We will build community, retake the collective memory that points to the future. On this route, the poor masses will work to unite with their fellows, with their dispersed siblings, strengthening themselves, educating themselves, coming together. Every member sharing their knowledge, experiences, defeats, triumphs and new ideas to fight and to win. Our call is to prepare ourselves to fight and win!

Our agenda is land, justice, the presentation of our disappeared alive, freedom for political prisoners, punishment for those who assassinate our comrades, and a dignified living. Our communities know that peace and happiness can only come after we do away with this unjust war – this war against the people – that they have imposed.

Our route is the Revolution of New Democracy and Socialism! There is no other route than ours!

We choose to fight, because there is no electoral party that represents the poor masses.

We choose to fight, because their electoral circus only represents the legitimacy of the regime.

We choose to fight, because we do not traffic in blood and history, we do not forget.

We choose to fight, because we will not be in the back of the line applauding their farce.

We have resolved in this National Conference, in the light of analysis, from revolutionary criticism and self-criticism, that we will not be the scaffolding to their high-rise, nor will we give in. What we will do instead is to defend the rights of the people, principally the right to rebel.

Except for power, all is illusion!

We are the spark that lights the prairie fire!

With Sol Rojo, the people will win!

Let the workers rule the nation!