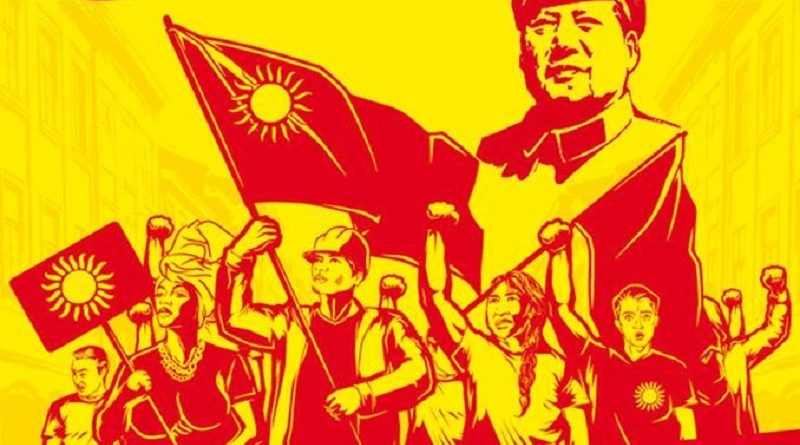 On this Mayday we call upon the proletariat and oppressed peoples of the world to celebrate the 50th anniversary of the Great Proletarian Cultural Revolution (GPCR) in China. In the GPCR, as a great strategic beacon, the Mao Tsetung Thought was intensely spread and Chairman Mao became the recognized leader of the world revolution and the one who brought forward a new stage of Marxism-Leninism: Maoism.

Five decades after Chairman Mao affirmed that “imperialists and all reactionaries are paper tigers” imperialism has descended further into its prolonged and deep crisis; in a world evermore ridden from storms the conditions to advance the revolution are increasingly favourable.
In the current phase of imperialism, the brutal concentration and centralization of capital reaches even more sharp levels. Today, 1% of the world population have more riches than the rest of the world’s population all together. With the ever-greater concentration of capital in the last five years the wealth of the 62 richest people in the world rose by 45% while the wealth of “the poorest half” felt by more than 38%. This “poorest half” is in its absolute majority situated in the oppressed countries, 33% in India alone. This big bourgeoisie are increasingly concentrated in the hegemonic superpower: five years ago, 41% of the owners of most of the world’s wealth lived in the USA… and they are now 46%. Due to the increasing centralization of capital, for the first time since 1999 the USA will account for over 50% of the amounts transacted in monopoly-related transactions worldwide.

At the opposite pole, around the world there are at least 800 million people living in extreme poverty. This poverty is expressed most acutely in semi-feudal countries; 75% of the global masses living in extreme poverty are poor peasants. About 750 millions have no access to clean water and 25% have no access to electricity. Hundreds of millions of people are being brutalized by imperialist wars, forced displacements, epidemics, starvation, and brutal unemployment—even in countries like Greece the youth unemployment is above 50%.

Imperialism, mainly Yankee imperialism, develops its imperialist wars of plunder and pillage against the dominated countries, mainly in the Middle East: Afghanistan, Iraq, Libya, Syria, Iran, is the main part of the booty of the current imperialist repartition, in which Yankee imperialism strives to deepen and consolidate its condition as sole hegemonic superpower status while the Russian imperialism strives to maintain their spheres of influence and its condition of being an atomic superpower. As well as imperialist China strives for a stronger repartition and so thereby, they are getting increasingly in contradiction with the Yankee imperialism, the sole hegemonic power. Between imperialist countries of Europe the struggle for hegemony (mainly between Germany and France) is not yet decided; this brings their leading powers into distress towards the other imperialists.

The imperialist coalition led by the USA, in dispute with Russia results in collusion to divide and rule the Syrian nation and the whole subcontinent (as recent agreements between Lavrov and Kerry shows); it is promoting all kinds of massacres and genocides in the name of war on “terror.” For this they are launching smokescreens, putting peoples against peoples to divide the anti-imperialist front.
After more than five years of imperialist aggression in Syria there are over 470 000 dead, nearly 2 million people injured. In five years the country’s average life expectancy has fallen from 70 years to 55.4. These numbers add up to no less than 5,350 people who died trying to migrate in 2015.

The passing of Russia into an active role in the war in Syria is a part of its struggle to defend its interests in Syria and Ukraine. As part of inter-imperialist dispute for dominance of the region, the lackey governments of Turkey and Saudi Arabia are making all sorts of provocations encouraging Yankee imperialism to devastate the region even more, and to isolate and defeat Iran even more—as the episode of the recent decapitation of Shiite leaders shows. The inter-imperialist dispute cannot result in any benefit for the masses but instead it will deepen the colonial and semi-colonial domination as we are witnessing in Syria, Iraq, Yemen and Libya.

Hence, regarding the struggle of the Kurdish people against the domination of the Turkish State and Middle Eastern countries, we reaffirm that only the New Democratic Revolution, through the People’s War lead absolutely by Marxist-Leninist-Maoist Parties, can achieve the liberation of their people and ensure the national minorities their unrenounceable right to self-determination—even their right to complete separation.

While they extend imperialist war of domination abroad, internally they wage war on the poorer masses of their countries. Imperialism uses war as a mean to solve all sorts of problems. In the name of the “war on terrorism,” they impose the Emergency State, repression and militarization of the whole society, reactionary campaigns of racism and xenophobia against immigrants’ neighbourhoods.

With the policy of “adjustments and new labor laws” they continue suppressing the long time conquered rights by the proletariat and increasing the exploitation of wage labor. Millions of workers, especially young people, took to the streets in powerful protests in France and other European countries.

The proletariat, the masses, led by communists, must organize the proletarian and mass resistance against the internal war and resolutely undertake the preparations to turn the imperialist wars into revolutionary wars.

To do so from the belly of the imperialist beast, communists are constructing new Maoist Communist Parties, making efforts to merge with the deepest masses of the proletariat, to win ideological hegemony in the revolutionary movement in order to, in front of all non-proletarian ideologies, mobilize, politicize and organize the most exploited sections of the working class and the poorest masses, to prepare and carry out through actions the beginning and development of the People’s War.

The countries oppressed by imperialism are the storm centres and base of the world revolution. In India, the Philippines, Turkey and Peru, the masses and the peasants, the main force of the New Democratic Revolution, rise up through Agrarian Revolution to defend their lands and defeat the displacement plans from the countryside carried out by bureaucratic capitalism engendered by imperialism.

In India, the People’s War developed by the CPI (Maoist) has survived the encirclement and annihilation campaigns of the enemy, imposing defeats on imperialism and all reaction, and it is a great example for the masses of the whole world regarding the way forward. Hundreds of millions of peasants joining the masses of Indian workers—raised up in People’s War under the direction of CPI (Maoist)—add great strength for the world proletariat.

The old Indian state, headed by the reactionary Modi clique, promotes the massacre of Adivasi peasants, mass arrests in the countryside and in the cities, and the persecution of revolutionary leaders and democratic personalities as part of the war on the people in a desperate attempt to stop the revolution. Thus the Indian reactionaries are revealing the true character of the government and the Indian state and its fake democracy.
By developing the People’s War and joining the national liberation struggles of the New Democratic Revolution, the CPI (Maoist) is preventing the division of the masses. They are defeating the new revisionism; they are an example for the International Communist Movement.

In Brazil, the deep political and economic crisis of bureaucratic capitalism shattered the official propaganda that sought to present Brazil as a new “rising power” (“BRICS” as a new perspective to the world, etc.). In the midst of the economic crisis, traditional and new political parties, representing different class fractions, pitted an endless struggle to see who stays on top of the old bureaucratic state machine. And although the bankruptcy of the opportunist aroused an anti-communist new wave, the peasant uprisings, united with the struggles in the cities, promise to shake up the entire old order and raise the class struggle to new levels.

These facts unmask the new revisionism of PCPMOVADEF/PCPMLM in Peru, of Prachanda and Avakian that want to deny the validity of the analyses of Lenin and Mao, separating the two great currents of the International Communist Movement: the national liberation struggles of the oppressed peoples and the proletarian revolution, whose unity is guaranteed by the Communist Parties.

More than ever the urgent task of the Marxist-Leninist-Maoist movement is to fight the current state of dispersion in the International Communist Movement, struggling for a Unified International Conference of Parties and Organizations that are Marxist-Leninist-Maoist. Pursuing this task will serve to establish, through the line struggle, new levels of coordination between Maoist forces around the world that will trigger new Peoples War’s and enhance the anti-imperialist movement under the hegemony of the revolutionary proletariat.

Developed and led by Chairman Mao Tsetung, the GCPR was the most advanced stage, the highest level of the Proletarian World Revolution. It put forward and solved the problem of how to lead the class struggle under the conditions of the dictatorship of the proletariat, how to continue the revolution under socialism and move society to Communism after the ascent and success of capitalist restoration in USSR (1956); and for 10 years it prevented the capitalist restoration in China.

The GPCR, mobilizing hundreds of millions of masses in defence of the dictatorship of the proletariat, was the most shattering and overwhelming blow to bourgeois ideology, politics and culture, arming the international proletariat with Mao Tsetung Thought, which turned into Maoism.

Chairman Mao Tsetung established that to struggle against power holders who take the capitalist road is the immediate task of the GPCR, however, that its fundamental task is to solve the problem of world outlook; the question is to eradicating the roots of revisionism. Therefore we must grasp the shining GPCR and its teachings underneath the change of ideology and in this sense fully assuming Maoism as the key issue for the class to take power, supported by a people’s army capable of defending the New State supported by immense masses.

Fifty years after the initiation of the GPCR the powerful East wind is continuing blowing to sweep away imperialism from the earth. The glorious People’s Wars of India, Peru, the Philippines and Turkey threaten to set the entire prairie on fire. These People’s Wars, despite a thousand difficulties, are proving that the imperialist bandits are the real terrorists, the popular masses are the real heroic builders of a new world, that imperialism and all reactionaries are paper tigers, and that the masses are almighty.

On this Mayday, amidst a world evermore stormy and challenging, to celebrate the GCPR is to continue swimming against the current, challenging wind and tide in deep ideological and political struggles to uphold Maoism in the struggle of the international proletariat to conquer power. The Communists around the world must assume their role with acts of war against imperialism so as to place Maoism in command and as guide for the new great wave of world proletarian revolution and sweeping imperialism off the face of the earth!

We celebrate the beginning of the struggle to put Maoism as commander and guide of the proletarian world revolution to sweep away imperialism from face of the earth, a challenge that requires to resolve the pending and delayed task of constitution and reconstitution of Marxist-Leninist-Maoist Communist Parties throughout the world so as to trigger the People’s War in as many countries as possible.

Down with imperialist war, long live the People’s War!

Imperialism and all reactionaries are paper tigers!