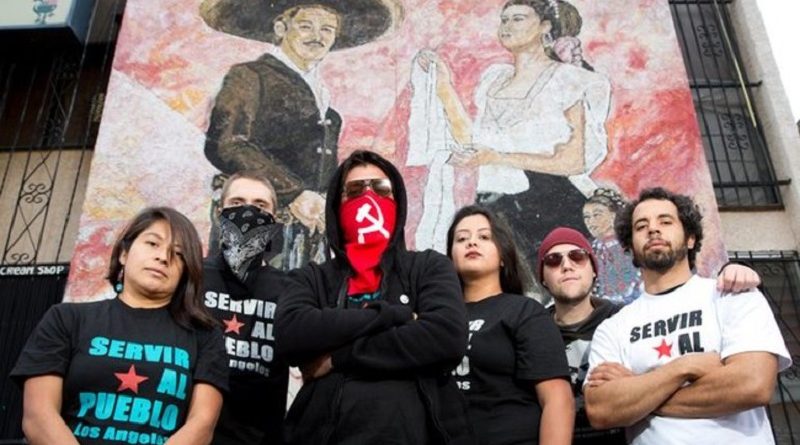 We have interviewed an activist from the Red Guards Los Angeles, a Marxist-Leninist-Maoist group in California. The topic is their Serve the People Program.
Tjen Folket: «Hello comrade, can you tell us about your program? What is the program? How do you do it? How do you distribute food? Is there other elements than food in the program?»

Manuel: The web page of the program is www.servethepeoplela.org. We dont only distribute food, we also distribute clothing, toys and any other donation we get from people. most of your questions, i believe, can be answered from our website.

Essentially, Serve the people – Los Angeles, is a project of the Red Guards – Los Angeles which is a Marxist-Leninist-Maoist organization. In serving the people, we hear about the vast and various ideas of the masses, we engage in learning from the masses, revolutionizing those ideas and returning them to the masses. We do this twice a week, on Friday and Sunday.

All efforts are made to get those people we serve to actively participate in the organization and ultimately take it over. Lastly, and the most important part, we create Serve the People programs to create proletarian and revolutionary parallel positions of power (dual power). Because we must be creating what we want in the future socialist society now, while knowing that only a revolution and a Maoist communist party can lead us there.

Tjen Folket: «Thank you comrade! On the “critical” note, I wonder if not the christian or bourgeoise NGOs does stuff like this in LA? In my city in Norway, christian organizations distribuiate food and clothing, also the county and some NGOs. Is it possible to “compete” with these forces in their own game, so to say? How do you grasp the contradiction of serving the people and not becoming mere welfare org?»

Manuel: Great questions. Principally, what separates our group from ideological state apparatuses*, such as churches and non-profits, is that we actively engage in revolutionary politics, speaking to the people, giving then Marxist material. We’re also organizing a mass study group soon. We defend our community, with these people, from gentrification, using militant confrontational tactics.

Additionally, unlike a church or non-profit, we understand the contradictions in the capitalist system and actively, consistently, put politics in command and work to keep our Serve the People program connected to building the party. That is one of the most fundamental differences between revolutionary organizations and the ideological state apparatuses.

Also, remember to check out the website. There are a lot of good photos, articles and information for you.

*Ideological state apparatus: A term developed by the Marxist theorist Louis Althusser to denote institutions such as education, the churches, family, media, trade unions, and law, which were formally outside state control but which served to transmit the values of the state, to interpellate those individuals affected by them, and to maintain order in a society, above all to reproduce capitalist relations of production. http://www.encyclopedia.com/doc/1O88-ideologicalstateapparatus.html