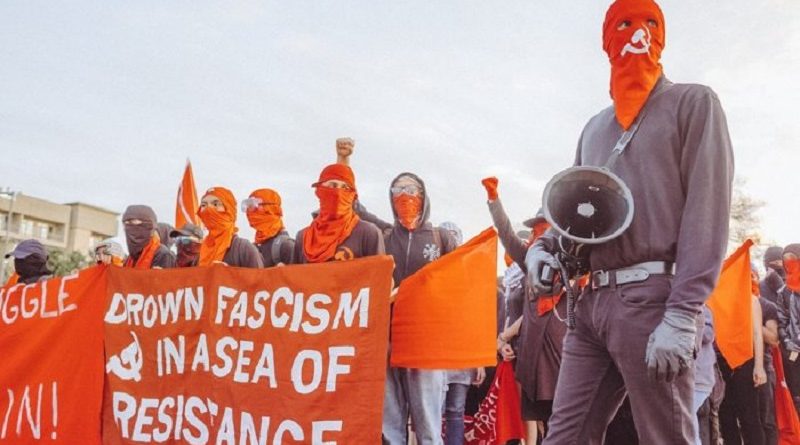 The pig collaborators clutched their pearls days before the first big demo of the new year. They sent their most palatable representatives to seek a parlay with us wanting some kind of “assurance” that we were not planning to “wig out,” which we assume means riot. This is all due to the fact that so-called “One Resistance” is a misnamed coalition of pig apologists, collaborators, and NGO poverty pimps who seek to prance around harmlessly squarely within the confines of Trump’s law and order, ruffling no feathers and having all permits in order while inviting none other than the racist murdering pigs and the state trooper brownshirts who have been violently attacking antifascist organizers for months.

The legal “left” seeks such collaboration and reassurances first because they hate and fear the masses. They fear the righteous anger and the rebellion of the masses and as a result have no other army to protect them except the one which already represents their class interests: the police. The legal-left is so deep in the mire of reformism and electoral cretinism that they have long ago lost any semblance of revolutionary vigor. They would pass us off as confused and angry youths, but the truth is quite the opposite. In fact, it is our understanding and application of revolutionary science that guards us against their type of capitulation as well as their conciliatory approach toward the state and other class enemies. We are not confused. When we fight, we fight for communism, and all our constructive and destructive activity is geared toward building our party, which will wage a protracted people’s war, establishing socialism and continuing the revolution under the rule of the working class. 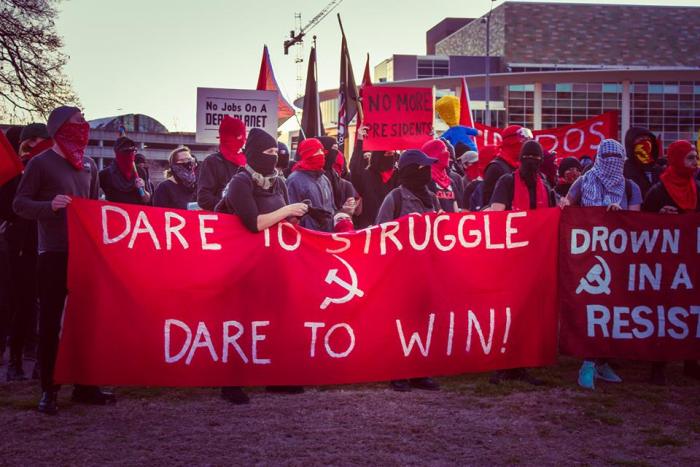 Some of the worst legal-left organizations have a long track record of being paid by the police, and we have already argued in other places that groups like Austin Justice Coalition should not be worked with. Yet there are still some “socialist” organizations who continue to sit with them and prop up their sham “resistance.” What does resistance even mean to these cretins? To us, resistance means rebellion. Put simply, resistance means putting a stop to anything and everything that harms our class. It means fighting tooth and nail to build the structures to defend ourselves and make war against this system. Resistance does not mean respectability politics and calmly tailing behind trade unions who endorse Democrats while running useless candidates. Resistance cannot mean working within the system, and it certainly does not mean calling yourself a “socialist” out of fear of what it means to live up to the title of communist.

Communists are rebels, and we resist. We resist anything to do with this toxic, abusive, and profoundly sick system, and we aim to kill it. We mince no words about this and discourage anyone from swallowing the sugar pills of the legal-left, who have gotten so soft soaking in the system that one is hard pressed to even tell the difference between them and the rest of the filth.

We participated in and supported the call for a united antifascist bloc. This bloc was formed principally for self-defense, not only against the police but also against the liberals and their legal-left vultures and any other enemy of the people. At previous demos after Trump defeated the war criminal Clinton, our comrades were attacked by the state and fascists and have been snitched on (framed, actually) by liberals, who materially serve as the front line of defense for fascists and as an intelligence network for the pigs. Our bloc offered us strength in numbers while preventing liberals and their legal-left representatives from ideologically or physically dividing us or watering down our message.

Maoism gives us the weapons that will crush the enemy beneath the boots of the masses. It lights the way and exposes the opportunists and sellouts who have outlived themselves. It provides us with three indispensible weapons that all Maoist organizations, regardless of their size, are working to build and establish.

The first and most important among these is the Maoist party—Red Guards Austin’s reason for existence is to build this party with other Maoists in the US. The party-building organization becomes the most crucial weapon for a Maoist because all other work stems from the success of the party building effort. Without a party there will be no revolution. The party is the organized expression of the working class; it is the leader in everything.

The second most important indispensable  weapon is the people’s army, which is commanded exclusively by the Maoist communist party and exists in nuclei in the form of partisan squads and people’s self-defense units. As the party-building efforts mount and crystalize through struggles and two-line struggles internal to ourselves, we will continue to militarize and build an army around our party that will be focused on people and not t 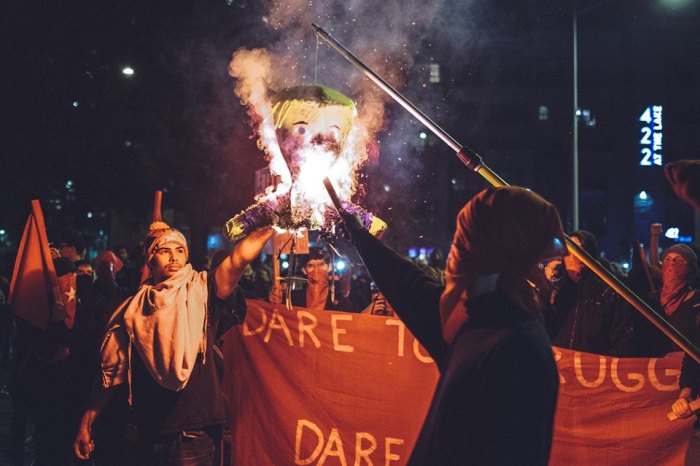 echnology or weaponry—people’s soldiers who will arm themselves by capturing weapons from the enemy in the proletarian method of building armed forces. We reiterate the universal truth of Maoism by repeating these words from Mao: “Without a people’s army, the people have nothing.” For us, inch by inch the party and the people’s army even in their embryonic states are inseparable, they grow together and live and die together.

These three weapons must be cultivated at all stages of building and must not be ignored or neglected. To do so would be to neglect the needs of the people and fail to serve and defend them wholeheartedly.

So what is different about the antifascist bloc we took part in and helped to lead? For starters, it correctly identifies who our friends are and who our enemies are by safeguarding against the police and exposing rising fascism as the number one threat posed by this presidency. Secondly, it is a structure that allows for a diversity of tactics without compromising on self-defense. In the past the enemy and enemy agents have been able to isolate comrades and seriously injure or arrest them. The antifascist bloc at J-20 was a nascent form of a more disciplined bloc that can move as a unit and coordinate defensive moves—or attacks, for that matter. We learn by doing, and this action provided us with a practical basis for more disciplined militant actions to come. Thirdly, to be antifascist means abandoning fascist notions of ideal workers. This means we understand our class with nuance, that within our class is multiple overlapping oppressions rooted in class based oppression and exploitation some workers face a compounded set of oppressions. We are all-inclusive so that all can contribute to the best of their ability for the people and the revolution. Unlike the legal-left, which fails to keep pace, stick together, or provide spaces for those with mobility impairments, we march to include all of our comrades, who are well fit to smash a fascist from their wheelchairs if need be.  This too is a vital part of serving the actual needs of the people where the legal-left fail and show their true colors as ideological agents of the existing state by reproducing elitism and ignorance obscuring the matter.

People are disabled by capitalism, and the socialist system which we are prepared to die for is one that does not disable people and does not exclude anyone from social activity, which must be mainly understood as rebellion. While liberals and the legal-left will of course hide behind their hollow claims of fighting for disabled people, the reality is that time and again, it is they who help perpetuate not only disability but the discriminatory ideology that underpins it. Furthermore, and crucially, the methods the liberals and the legal-left cling to are completely unable to create the kind of society where all give according to ability and receive according to need. This is a society that can be won only through class struggle and the dictatorship of the proletariat. This society, communism, can come about only through a revolutionary socialist epoch to remold and transform society. 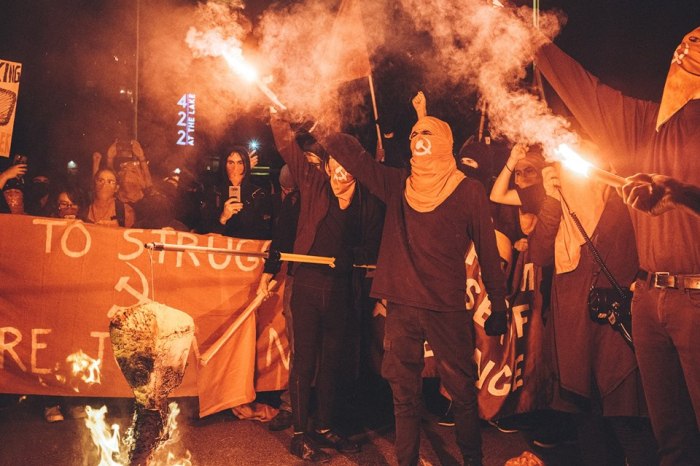 Finally, we must also state that it was not well-meaning liberals who defeated the Nazis and their fascist hordes—it was Communists! It was Stalin’s Red Army that closed and liberated the death camps in Poland. It was not love that trumped hate—it was guns wielded and commanded by Communists. Ideologically, we condemn nonviolence as counterrevolutionary trash which is in direct service to the ruling class. Antifascism means preparing to use and master revolutionary violence. It means organizing in a far-seeing way, beyond demos and antifa response work, beyond even armed community self-defense into people’s war.

This first big demo of the new year shows us two paths: on one hand, the liberal and legal-left road to nowhere, which sits squarely inside the system and lacks the vision of anything else, and on the other hand the road of rebellion, of actual resistance, of finally taking off the shackles of this system and standing up against it—of not working within it but killing it from the outside. We are small right now, but we are growing and will continue to grow. Because we tirelessly stand for the working class and never abandon its worldview, and because we insist on analyzing all questions using revolutionary science, communists are both far-sighted and perceptive of the internal motion of things. This is why we make the best analysis and pose the greatest threat to the capitalist system. We chart our own path and build our own forces, and we can develop and sharpen our own weapons as well as capturing them from the enemy. We do not fear the people but embolden them, politicize and train them to form militias and then an army. We know the people do not fear us either, because we speak with them constantly.

What about the pigs themselves? They kept a distance, and we feel this is due in part to the success of the antifascist bloc. Several of the crowd’s chants struck a nerve with the pigs, and in spite of their anger they found it impossible to single out leaders this time. The pigs even went so far as to suggest that they protect us “commies,” a claim that is laughable, since it is they who pepper-spray, beat, and arrest us and in one case attempted to kill one of us.

The march itself, on our end, was a success: we protected each other, drew necessary lines of demarcation, and gave a clear antifascist message. We concluded the night with flaming American flags and a burning effigy of Donald Trump in piñata form to chants of “Love doesn’t trump hate—punch a Nazi in the face!”, “Fuck Trump, fuck Pence—organize for self-defense!”, and “One solution: revolution!” We will never give assurance to the legal-left. We are not accountable to toothless dogs than cannot bite even when cornered by fascists. We are accountable only to the people. It is right to rebel, to increase the pressure, and to turn rebellion into real resistance and to convert resistance into revolution—armed struggle, people’s war!

Down with all traitors to the people!