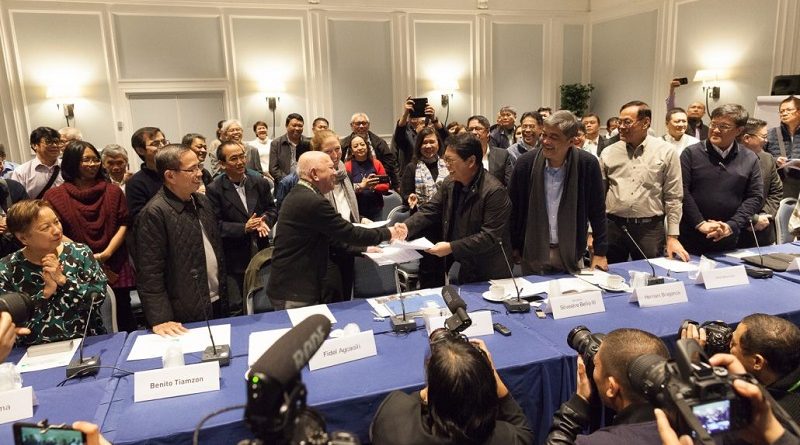 The peace panels of the National Democratic Front of the Philippines (NDFP) and the Government of the Republic of the Philippines (GRP) signed today the Supplemental Guidelines for the Joint Monitoring Committee (JMC) after a six-year impasse. It was the result of renewed efforts from the NDFP and the reconstituted GRP monitoring committee appointed by the Duterte government.

Once implemented, the Supplemental Guidelines will now make it possible for the JMC to conduct joint investigations regarding both parties’ compliance with the Comprehensive Agreement on Respect for Human Rights and International Humanitarian Law (CARHRIHL), the first substantive agreement signed under the NDFP-GRP peace negotiations. The CARHRIHL was signed in 1998.

The JMC was last able to submit a draft of the supplemental guidelines to the two peace panels in 2011, but the GRP panel under then Pres. Benigno Aquino III did not sign the document because it refused to acknowledge that the NDFP has a separate duty and responsibility to conduct investigations in accordance with CARHRIHL.

In explaining the significance of the signing, NDFP peace panel chair Fidel Agcaoili said that joint investigations could finally be conducted on the thousands of cases filed with the JMC since 2004. For every case against the NDFP, there have been four cases filed against the GRP.

Many of the cases against the GRP involve extrajudicial killings, involuntary disappearances, illegal detention and violations of human rights and international humanitarian law as a consequence of military operations conducted by state security forces.